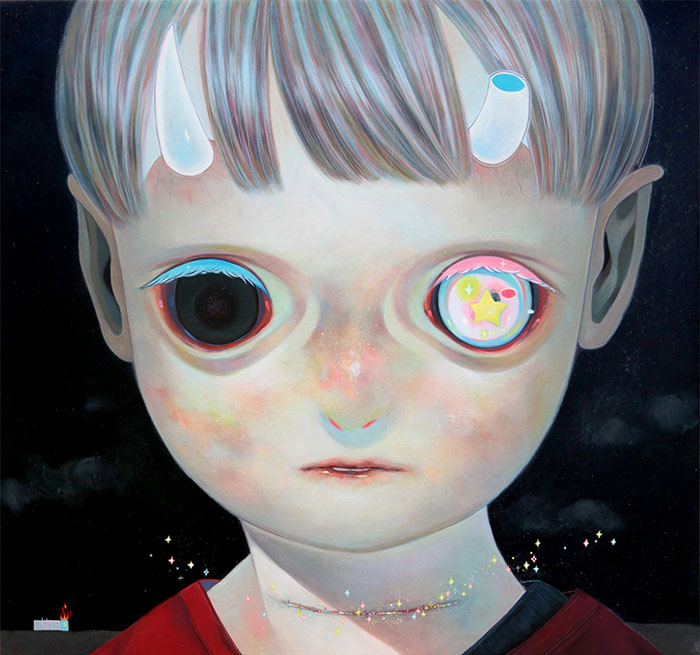 She had been married for five years – and still nothing. Her relatives felt pity and compassion for her; it was not usual for women to be barren in her large family, where children had always abounded. Every woman on her side and her husband’s side of the family had children. Lots of children! Big-eyed curly-haired boys and girls, in all sizes; they called her auntie, and it made her feel sick. She did not feel any hatred towards them; rather, it was the comments and reproaches of her husband and mother-in-law that had turned her into a taciturn and hardworking woman. She had no interest in chatting with the others on the doorstep. Rózka was big, strong, but nevertheless beautiful. Her hair was fairer than the rest of her kin, her skin was not as dark and her eyes sparkled with gold. This already set her apart from the others.

Rózka was healthy, so she devoted herself to her work, labouring in the fields and in the household until dark. Her husband had not yet come to terms with her not giving him a child, and drank all the more, until his tanned face stopped smiling. They lived in one room with his mother and father, and she would return there from the fields or from the cattle when dusk was falling.

Once when she came home, her mother-in-law and her husband weren’t in and her father-in-law lay drunk on the bed. She asked where the others were – he only muttered unintelligibly to the effect that her husband had taken his mother to town to his sister. Apparently she wasn’t well. Rózka ate her supper and went to lie down.

She was woken by his alcoholic breath and he was crushing her completely with the weight of his body. She couldn’t resist in any way, not even by screaming. He had covered her mouth with his huge hand and helplessly she looked into his crimson face … When he had finished he stood over her and told her she mustn’t tell anyone – anyway, they wouldn’t believe her. He slammed the door shut and she could only hear the clock clanging in time with the beating of her frightened heart.

Her husband came home about an hour later, didn’t even turn the light on, lay down next to her, turned over and soon fell asleep. He did not embrace her or even touch her, as if she were not there at all. She wanted to tell him everything, but had no strength left in her, and she spent the rest of the night staring into the dark; her thoughts, fear and humiliation mingled with the tears that streamed down her cheeks.

The old man continued to ignore her just as he had before, but her mother-in-law looked on with a smile as she threw up in the mornings and as her curves grew nicely. The smile returned to her husband’s dark face and he was kinder and more generous to her. The neighbours finally had something to talk about, while Rózka and her mother-in-law prepared the baby’s outfits and discussed what name to give it.

One month before the birth was due she had a dream. In it she saw her father-in-law and a child that resembled him. In the dream they were very evil and hurting her. When she woke up in terror, she could still hear their fearful laughter. She broke out in a cold sweat; she already knew that she didn’t want the child, that it would bring her damnation all her living days.

She gave birth to a son; they named him Karči, after the father-in-law. Rózka suppressed the strange repulsion she felt towards the baby and took it into her arms. Her son looked at her just like an adult and smirked malignantly as he narrowed his eyes. She quickly laid him back in his crib and shied away. Nobody noticed and everybody milled around and smiled at him; it was only she who saw that he was different from the other newborn babies, and that he was watching her with his coal-black, squinting eyes.

In the night, when everybody was asleep, a noise woke her. She sat up in bed and looked around: she discovered with shock that the boy was standing next to her bed with an eerie sneer on his face. She was surprised to find that he had teeth. He gave a sinister snigger and scampered back to his crib. She screamed until everybody woke up in alarm; they sleepily lit a lamp and asked her what had happened. She told them tearfully what she had seen. Her husband suspected that she had dreamed it, and her mother-in-law rushed to have a look at the baby, who was sleeping innocently. As it started to whimper and then cry, the old woman took it into her arms and comforted it. Then she came over to Rózka and scolded her for not loving her own child and ordered her to breastfeed him – the boy was surely hungry. Rózka was completely confused but took the child and offered her breast. The boy started sucking immediately. Suddenly she felt a sharp pain: the little one had bit her nipple to the flesh, and blood gushed out. She pushed him away onto the blanket at the foot of the bed and complained in tears that the child had bitten her. The mother-in-law picked up the baby and passed her finger over its toothless gums. Her daughter-in-law must be wrong. She chided her and everybody came to the conclusion that Rózka had cut herself on purpose so as not to have to breastfeed. The old woman decided that she would feed the baby cows’ milk and told the young mother that she would look after her grandson herself since his mother had rejected him. The grandmother took the child to bed with her and her husband; and so that night came to a close.

Nobody spoke to Rózka in the morning. The young woman felt miserable. She didn’t know what to do, how to tell them everything that had happened and that the baby was actually a sin about which she had kept silent; that he was actually the devil’s little helper in a child’s disguise.

Barely a week later they found the old woman dead. She lay in bed with her eyes open wide, and the child giggled next to her waving its arms and legs in the air. Rózka knew that it had killed her mother-in-law, and that it would continue to kill. Nobody listened to her; they thought she had gone crazy and was talking nonsense. They assumed the death of the old woman had been caused by a heart attack.

During the following night Rózka decided to stay awake and keep an eye on the child. When it thought everybody was asleep it slowly climbed out of the crib and scuttled over to her husband’s bedside. She pretended she was sleeping but watched the creature through her eyelashes to see what would happen. The child pulled the pillow from under the man’s head and pushed it down on his face. It had such strength that even when the man was kicking and trying to pull the pillow off, it still held him down and the man gradually became weaker. Rózka jumped up and tried to tear the pillow out of the baby’s hands. Its strength was tremendous: it pushed her over and continued to smother her husband. She picked up a chair and hit the baby on the head. It started to squeak and made noises like a goblin.

Suddenly a light came on and the old man and his half-dead son beheld an awful sight. Rózka was on the ground covered in blood: the small child, with bulging eyes and twisted face, was tossing her around and punching her face with its puny fists. Both men rushed to the young woman’s assistance. The goblin attacked them too. The younger man caught it by the legs and smashed it against the wall. It fell to the ground, quickly picked itself up and darted to the door, squealing. It turned around one last time before escaping into the darkness with a blood-chilling screech.

The young man took Rózka into his arms and wiped her face with a cloth. His hands were shaking and he was crying. The woman was barely breathing. The door creaked open and closed and she looked through it apprehensively into the dark night as though she expected the devilish child to return.

The story is now added to your reading wish list. All the stories you want to read are waiting for you in your new personal area
try it
3
Wisam Gibran