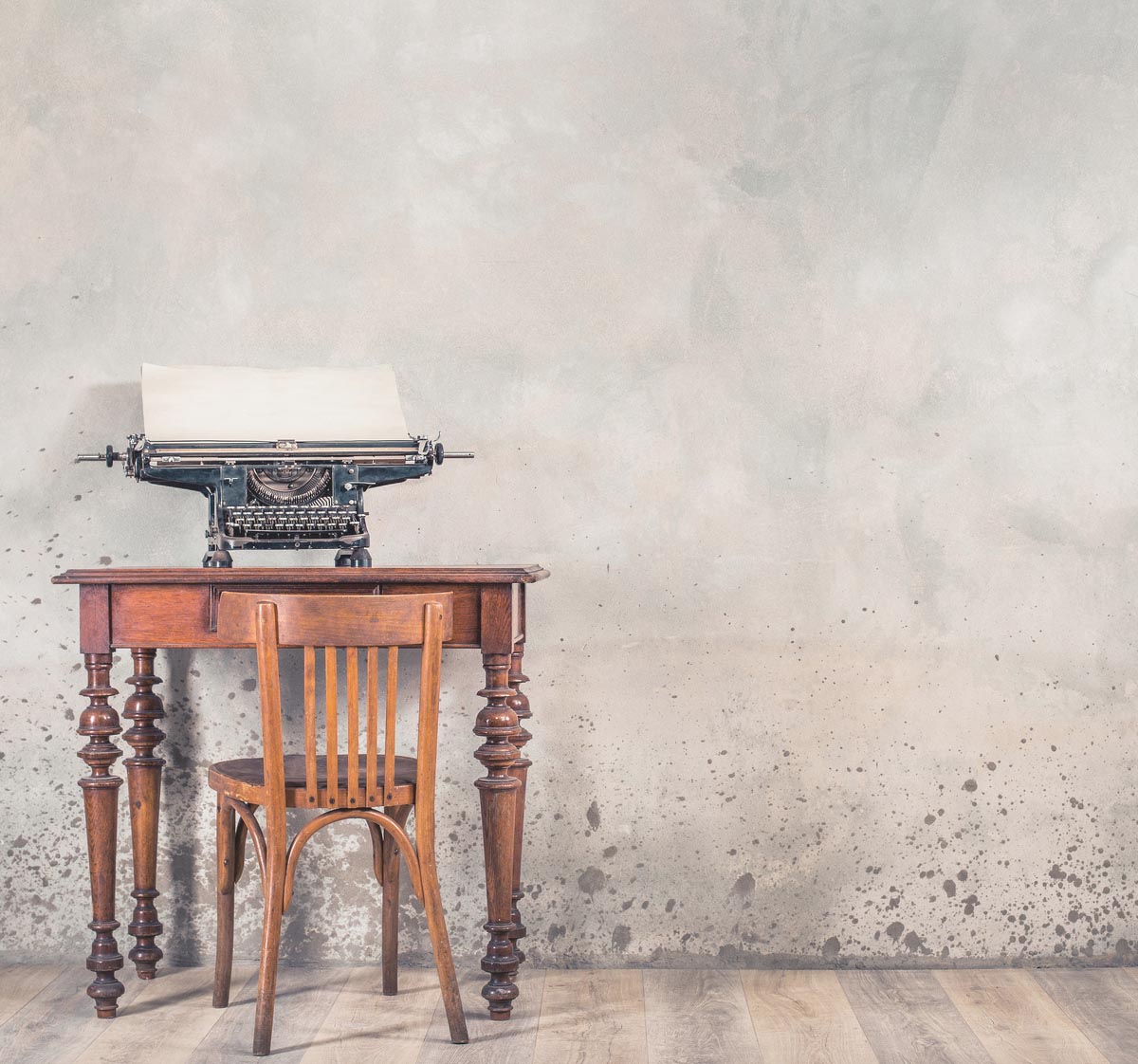 “I haven’t written a word for a year (…) I’ve tried to write. Every day I sit at the typewriter, but I can’t get started.” – J.D Salinger

“What’s a director if he can’t engage in direction? He’s like a projectionist without a movie, or a mill without grain. He’s a nobody.” – Anonymous

“Even on my best days I haven’t been able to write more than a page or two. I seem to be afflicted or cursed with some failure of mind that keeps me from concentrating on what I’m doing.” – Paul Auster

Salinger, Anonymous. Auster. Don’t let names frighten you. I’ve read these confessions more than once. They’re nothing but a thorn prick. But I ask you: What’s a thorn prick compared to a piece of hot metal searing your foreheads and sides?

For two and a half years—let’s call it three, I found no words. All of a sudden, they evaporated. Writing a sentence consisting of a subject, a verb and an object had become a superhuman effort, the outcomes of which were nothing to be proud of.

Unlike Arturo Bandini, unfortunately, I wasn’t lucky enough to find a great editor named Hackmuth that I could write to in complaint, “My God, Mr Hackmuth, something’s wrong with me. The old zip is gone and I can’t write anymore. Do you think, Mr Hackmuth, that the climate here has something to do with it? Please advise me. Advise me please!” Then he would say reassuringly, “Take it easy. Get out and about. Words can’t abandon you forever. And one last piece of advice: Don’t strain your eyesight. Remember what happened to Tarkington and James Joyce!”

It was the longest siege of determination ever, the longest siege in history. Longer than the Siege of Leningrad. I love the look of this sentence in Russian: Блокада Ленинграда. And the result? Nothing. I won’t delve into the causes of this disability, whose scars I’ll carry inside me forever. As for my body, there was no way to hide its fingerprint anymore: sunken eyes and a distant gaze, like that of a devil in torment amid a crowd of guffawing angels.

Throughout that period, I watched a lot of movies and read still more books. I slept like a polar bear, without a hope of anything. And the poetry that had once placed a golden crown on my head, I flung in the dirt. As I read, I became more alert, more sensitive to words, and my undisputed insightfulness expanded. Still, though, words receded into the distance. As soon as I put my hands on the keyboard, they would tuck their long ears like rabbits and go scurrying terrified for cover into the writing field. Then, nothing would happen but the swaying of dry grass.

I got up from the table and went to stand by the window that looked out over the mountain, but I went on hearing the grass swaying. I slipped into bed, and the swaying slipped in with me. Bleak tall grasses like violin bows at a funeral moved with a black subtlety and grace, as though they were congratulating themselves on the abundance of water and nourishment in my nightmare-rich soil.

My eyes went on sinking, and my gaze grew more and more distant. As the days go by, it became more and more similar to the look of Van Gogh—the Vincent Van Gogh that you all know. And I mean it literally, not figuratively. My gaze terrified me. The fear raging in my heart terrified me too. But I wasn’t afraid. Believe me—never once in that entire period did I feel afraid. You know what the movement of the grasses did to Van Gogh. It drove him out of his mind. And you know what it did to Hemingway. He endured it for a while, but ended up blowing his head off with a shotgun. Believe me. Even after seeing a picture of his brains congealed on the kitchen wall like quince jam, I didn’t feel a grain of fear.

I don’t mean to brag. However, it’s the truth, and not in comparison with these two men only, but with everybody. My stamina is incomparable. I’ve put it to the test on more than one occasion. In the military barracks, when I was in the army, I outdid everybody, soldiers and trainers alike. When everybody else was out of breath and blue in the face from fatigue, there was one lung that went on working, one that kept on breathing comfortably. And when everybody stopped, one person kept on running to the end of the barracks racetrack. As I said, I don’t mean to brag, but I think you know who I’m talking about.

I’d never known where this muscular strength came from. However, I did know that it had to be the source of every other kind of strength, be it spiritual or emotional. As for how to translate this muscular prowess into a spiritual and psychological immunity, and into a poetic and aesthetic salvation, this was the mystery I had to solve.

Three years in a strange city, in a house consisting of two cramped rooms, a bathroom with an area of two square meters, and what looked like a hallway that was supposed to be a kitchen furnished with a single chair and a table for both eating and writing. There was an Olivetti typewriter, two brown sofas, a vertical window opening onto a balcony overlooking the mountain, a horizontal window overlooking the forest, a couple of flowerpots, a couple of oil paintings, a couple of deluxe bronze frames housing photographs of my father and mother, and two vertical bookcases affixed to the living room wall, with books placed under them on a wooden stand, and others on the floor. There was also a bookcase in the bedroom. And there was nothing else. N-o-t-h-i-ng but that sound that roamed from room to room, a sound that resembled the movement of dry grasses in a field whose inhabitants had all died.

It’s inexplicable. But I might say I have a self-esteem that saved me throughout that period. Even when the water was up to my thighs, I was confident that I could bring the boat out of the storm.  My self-esteem kept me from leaving the helm even when the water had reached my manly 40-centimeter waist or was nearly in my mouth. When all I could do was stare up at the skylight, I kept hold of it, drawing the ocean air into my nostrils.

Meanwhile, on dry land, in noisy pubs, everyone was reporting the news of the boat’s sinking and its captain’s demise. Glasses clinked and sparkling toasts were drunk to the accompaniment of embraces and pats on the back.

The captain, of whom we heard no more until everyone forgot him, was now simply a “he”, free in the waters of the sea, and independent. As “he” was battling the waves alone, “I” was repeating the same monotonous cycle: drinking, reading, sleeping, waking, peeing, bathing, riding the metro, working, and leaving work.

Everything was quiet until I heard the sound of the engine roaring again, and the beloved words of Christ reverberating in the silence of the house, “He was unknown when He was alive.”

And I shed hot tears.

I went to sleep with wet eyes. As my eyelids began to drop, “he” and “I” plunged into each other with the grace of a rose stem as it plunges into the soil. Then the time that had separated us slowly disappeared, leaving a foamy streak like that left by the passing of a ship.

I awoke beneath the weight of a feeling that a magnetic field was drawing me steadily toward dry land. Suddenly I was no longer certain whether I was in my room, or out on the ocean, whether I was “me” or “him.”

The boat wearied me as it was being drawn to shore.

As I tossed and turned under light blankets, it occurred to me that my long hours of sleep hadn’t been devoid of determination. I thought about the blank page that had humiliated me over the course of those three years, and how I could make public the agony those years had brought, even if the effort would be like emptying a waterlogged boat with a bucket.

Translating this effort into words, and from words into a mental image, is what prompted me to resort to silence. And it is this very thing that now prompts me to recognize that any style not dictated by your true situation is bound sooner or later to end.