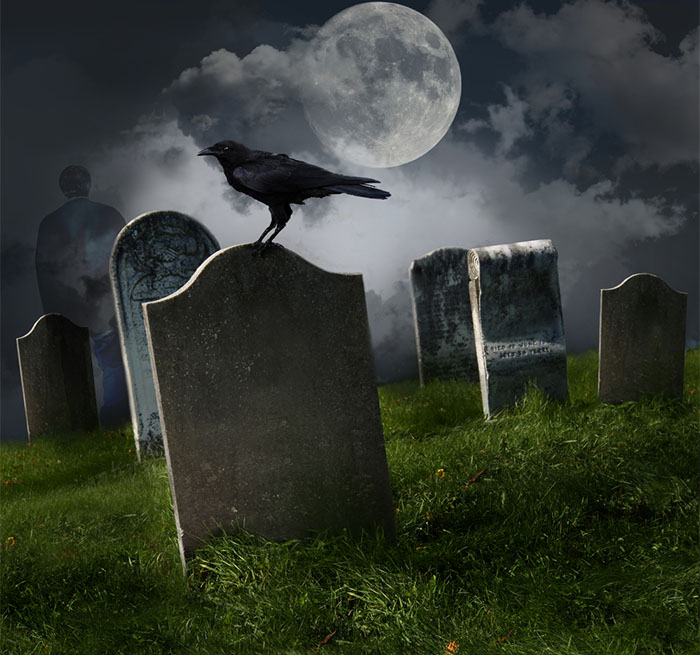 Every night my father took the path from the cemetery to our house. I could hear his footsteps in the garden. I pretended to be asleep while he looked for the stick that he used to hide in my closet. I left the door open for him and played an amusing game with him – he left his eyes in his grave and every time I hid his stick in a different place.

I watched him with half an eye until he gave up. Then he curled up on the floor, miserable and tired. I got out of bed, took his hand and walked him back to the cemetery gate before the people of the house woke up. He walked through the gate confidently and with assurance, and I watched him from a short distance as he disappeared among the graves.

I’d never thought of getting rid of the stick—by throwing it in the river, for example, or breaking it on the garden wall. On the contrary, I’d taken extra care of it since my father’s night visits began. After each visit I got rid of one of the scars he had given me with it. I had one on my right shoulder, one on my left leg, and many small scars here and there—some visible and some beneath the skin.

I had gotten rid of all but one scar that was left at the bottom of the list. I didn’t know where it was on the skin or beneath it. One last visit from him and it would all be over and I would have eliminated them all. This time I would leave him lying curled up miserably in the corner of the room for longer than usual. I might wait until dawn or until he swallowed his pride and asked me openly to escort him back to his grave before the sun came up.

But he didn’t come for three nights. His absence made me very anxious. Had he caught on to the game? Or had he given up hope of finding his stick?

On the fourth night I decided to look for him. Maybe he had lost his way or was having a long doze in his grave. But this would be his last visit to us and then I would leave his stick on top of his grave and he wouldn’t bother walking around at night dead and blind.

At two o’clock in the morning I left my room quietly, taking care not to wake my mother, who leaves the door of her bedroom ajar. Then I crossed the living-room and the garden and made my way towards the cemetery. I didn’t think about how I was going to persuade my father to visit us for one last time. I didn’t have any particular plan in mind. But what dead person doesn’t hope to be invited out for a walk at night so that they can breathe cool refreshing air?

At the cemetery gate I spotted two shadows moving in the distance. I couldn’t make out their features in the dark. I went closer slowly and watched them from behind a large tree. It was my mother laying into my father with the stick. My father was trying to avoid her blows but he wasn’t moving from where he was or making any noise.

I felt my head and found a deep wound covered with dried blood.

A few minutes later the two of them were making their way towards the house with tired and heavy steps.

I went through the cemetery gate and disappeared among the graves sunk in darkness.