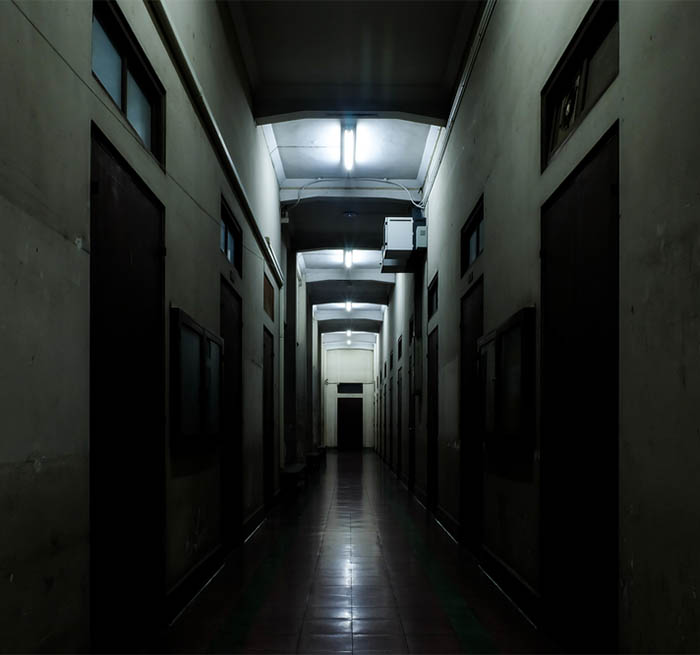 I don’t know how many hours I’d spent in solitary confinement. I was alone with four cold silent walls. I couldn’t hear anyone’s voice in that gloomy cell, and I don’t think anyone could hear me.

“Walls have ears,” the saying goes, but the walls within which I’d been confined were deaf and dumb. They swallowed up my screams, and no one answered me. I would sometimes hear the clanging of iron doors like wild claps of thunder, followed by showers of curses and insults mingled with terrified screams. But however hurtful and obscene the insults, the cries were muffled, deep, hopeless. Then a mountainous silence would cast its heavy shadow over my cell, my soul, my memory.

I had the urge to pee. But it was more than an urge. It was an urgent necessity, a pressing need that I had to meet no matter the cost. The chill that permeated the cramped cell intensified my desperation. My bladder was so full, I thought it was about to burst. I curled up like a hedgehog, trying to alleviate my sense of need by clenching my toes and legs and drawing up as tightly as I could.

My need to urinate started when the hulk of a prison guard with the glower on his face grabbed my wrist and flung me against the back of my cell like a sack. I begged him to give me half a minute to relieve myself, but my cry for help flashed between my lips and his sealed ears like a summer mirage. I pleaded with him a second time. I raised my voice somewhat, and in a tone of pitiful entreaty, I said to that keeper of hell, “For God’s sake, my kidneys hurt. Let me go take a piss. You can count to ten, and by the time you’ve finished, I’ll be right back here in my place.”

But instead of letting me go, that glower-faced SOB spat in my face, cussed me out, and then walked away whistling the tune to a song I liked.

While I was in that state, I remembered something my dad used to say: “Son, God Almighty’s put his light into beautiful faces. So if you have a need, make your request of people with beautiful faces. They won’t turn you away. There’s a saying of the Prophet that says, ‘Seek blessing from those of pleasant countenance.’”

“You were right, Baba,” I said as I visualized that guard’s nasty mug. I couldn’t get his image out of my head.

Like a stubborn donkey that’s stopped in a puddle of thick mud, time stood still. With every second that passed, my condition got worse until I started writhing like a wounded snake. I forgot everything but my need to urinate.

I thought back on scenes from my childhood. We’d been naughty little kids, and we would stop at the top of an alley or in the middle of a street, pull up our dishdashas or take off our trousers, and piss. I thought back on how we used to wake up in the morning and, before washing our faces, go out into the street to pee. We got a kick out of watching the steam that would rise from the puddles of urine and the rivulets that trickled across the ground. But the most fun of all was peeing in the rain, which gave us a delicious shudder that’s impossible to describe.

As I remembered those scenes, I cursed this sordid life. Was it too stingy to spare me a few minutes to empty my distended bladder? How had pissing become my most cherished hope on this bloody night?

I was about to wet myself. I felt like it, actually. But then I remembered I was wearing a pair of trousers my fiancée had given me for the very first time. “No,” I whispered to myself. “That’s silly! I’ll be damned if I’m going to pee in this pair of trousers even if the world comes to an end.” So I resisted, hoping against hope that this ghastly nightmare would be over soon.

An hour later, I heard the sound of the cell door. I’d curled into a fetal position to keep my bladder from releasing its contents. With the help of some sparse light stealing in through a skylight at the top of one of the walls, I made out the face of the person coming toward me. It wasn’t that ugly guard. It was a young man with a nice-looking face, neatly combed hair and clean clothes. And he wasn’t holding anything in his hand. Relief has come, I thought. This must be the kind of person my dad used to talk about. There was no way he would refuse my simple request.

I stood up and smiled, looking into his face. He smiled back. Then again, maybe I just imagined that he did. Maybe the sweet, natural-looking smile I saw etched on his lips was a permanent facial feature.

Before he’d uttered a word, I said pleadingly, “Please, let me go take a leak. Your colleague wouldn’t let me. My kidneys hurt, and I …”

I don’t remember how I finished my sentence. But before I knew it, that guard with the pleasant countenance was lunging at me like a scorpion and punching me repeatedly in the face. He kicked me all over: making no distinction between face, head, leg, stomach, chest, lashing out at random and with all his strength. If only he’d been content with the beating. But on top of that, he called me the vilest names in the book. He insulted my sisters, my God, and my religion. I don’t remember how long that orgy of beating went on. I remember clearly, though, that when he was finished, he took leave of me with the words, “I should spit on you, you filthy rat!”

After he was gone, I felt tremendous relief. I no longer had that overwhelming urge to pee. A mountain seemed to have been lifted off my chest. Strange, I thought. How could I feel so relieved after all that torture? When I lifted my hand off the cold floor, it was wet. I must be drenched in my own blood, I thought. But it wasn’t blood. I’d peed. The trousers that had been a present from my fiancée were wet, too. As if a waterskin had burst and everything inside it had come spilling out, my urine had spilled all over the cell floor. Over the puddles of urine, vapor wafted slowly upwards, etching that pleasant countenance in the void of the cell.