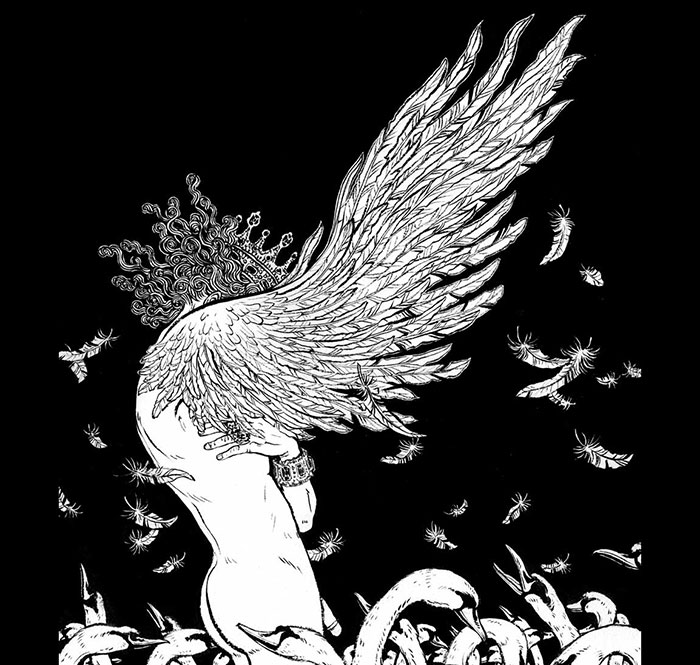 Here in the city lives a prince whose left arm is like any other man’s and whose right arm is a swan’s wing.

He and his eleven brothers were turned into swans by their vituperative stepmother, who had no intention of raising the twelve sons of her husband’s former wife (whose pallid, mortified face stared glassily from portrait after portrait; whose unending pregnancies had dispatched her before her fortieth birthday). Twelve brawling, boastful boys; twelve fragile and rapacious egos; twelve adolescences—all presented to the new queen as routine aspects of her job. Do we blame her? Do we, really?

She turned the boys into swans, and commanded them to fly away.

She spared the thirteenth child, the youngest, because she was a girl, though the stepmother’s fantasies about shared confidences and daylong shopping trips evaporated quickly enough. Why, after all, would a girl be anything but surly and petulant toward the woman who’d turned her brothers into birds? And so—after a certain patient lenience toward sulking silences, after a number of ball gowns purchased but never worn—the queen gave up. The princess lived in the castle like an impoverished relative, fed and housed, tolerated but not loved.

The twelve swan-princes lived on a rock far out at sea, and were permitted only an annual, daylong return to their kingdom, a visit that was both eagerly anticipated and awkward for the king and his consort. It was hard to exult in a day spent among twelve formerly stalwart and valiant sons who could only, during that single yearly interlude, honk and preen and peck at mites as they flapped around in the castle courtyard. The king did his best at pretending to be glad to see them. The queen was always struck by one of her migraines.

Years passed. And then… At long last…

On one of the swan-princes’ yearly furloughs, their little sister broke the spell, having learned from a beggar woman she met while picking berries in the forest that the only known cure for the swan transformation curse was coats made of nettles.

However. The girl was compelled to knit the coats in secret, because they needed (or so the beggar woman told her) not only to be made of nettles, but of nettles collected from graveyards, after dark. If the princess was caught gathering nettles from among tombstones, past midnight, her stepmother would surely have accused her of witchcraft, and had her burned along with the rest of the garbage. The girl, no fool, knew she couldn’t count on her father, who by then harbored a secret wish (which he acknowledged not even to himself) to be free of all his children.

The princess crept nightly into local graveyards to gather nettles, and spent her days weaving them into coats. It was, as it turned out, a blessing that no one in the castle paid much attention to her.

She had almost finished the twelve coats when the local archbishop (who was not asked why he himself happened to be in a graveyard so late at night) saw her picking nettles, and turned her in. The queen felt confirmed in her suspicions (this being the girl who shared not a single virginal secret, who claimed complete indifference to shoes exquisite enough to be shown in museums). The king, unsurprisingly, acceded, hoping he’d be seen as strong and unsentimental, a true king, a king so devoted to protecting his people from the darker forces that he’d agree to the execution of his own daughter, if it kept his subjects safe, free of curses, unafraid of demonic transformations.

Just as the princess was about to be burned at the stake, however, the swan-brothers descended from the smoky sky, and their sister threw the coats onto them. Suddenly, with a loud crackling sound, amid a flurry of sparkling wind, twelve studly young men, naked under their nettle coats, stood in the courtyard, with only a few stray white feathers wafting around them.

…there were eleven fully intact princes and one, the twelfth, restored save for a single detail—his right arm remained a swan’s wing, because his sister, interrupted at her work, had had to leave one coat with a missing sleeve.

It seemed a small-enough price to pay.

Eleven of the young men soon married, had children, joined organizations, gave parties that thrilled everyone, right down to the mice in the walls. Their thwarted stepmother, so raucously outnumbered, so unmotherly, retreated to a convent, which inspired the king to fabricate memories of abiding loyalty to his transfigured sons and helplessness before his harridan of a wife, a version the boys were more than willing to believe.

End of story. “Happily ever after” fell on everyone like a guillotine’s blade.

It was difficult for the twelfth brother, the swan-winged one. His father, his uncles and aunts, the various lords and ladies, were not pleased by the reminder of their brush with such sinister elements, or their unskeptical willingness to execute the princess as she worked to save her siblings.

The king’s consort made jokes about the swan-winged prince, which his eleven flawlessly formed brothers took up readily, insisting they were only meant in fun. The young nieces and nephews, children of the eleven brothers, hid whenever the twelfth son entered a room, and giggled from behind the chaises and tapestries. His brothers’ wives asked repeatedly that he do his best to remain calm at dinner (he was prone to gesticulating with the wing while telling a joke, and had once flicked an entire haunch of venison against the opposite wall).

The palace cats tended to snarl and slink away whenever he came near.

Finally he packed a few things and went out into the world. The world, however, proved no easier for him than the palace had been. He could only get the most menial of jobs. He had no marketable skills (princes don’t), and just one working hand. Every now and then a woman grew interested, but it always turned out that she was briefly drawn to some Leda fantasy or, worse, hoped her love could bring him back his arm. Nothing ever lasted. The wing was awkward on the subway, impossible in cabs. It had to be checked constantly for lice. And unless it was washed daily, feather by feather, it turned from the creamy white of a French tulip to a linty, dispiriting gray.

He lived with his wing as another man might live with a dog adopted from the pound: sweet-tempered, but neurotic and untrainable. He loved his wing, helplessly. He also found it exasperating, adorable, irritating, wearying, heartbreaking. It embarrassed him, not only because he didn’t manage to keep it cleaner, or because getting through doors and turnstiles never got less awkward, but because he failed to insist on it as an asset. Which wasn’t all that hard to imagine. He could see himself selling himself as a compelling metamorphosis, a young god, proud to the point of sexy arrogance of his anatomical deviation: ninety percent thriving muscled man-flesh and ten percent glorious blindingly white angel wing.

Baby, these feathers are going to tickle you halfway to heaven, and this man-part is going to take you the rest of the way.

Where, he asked himself, was that version of him? What dearth of nerve rendered him, as year followed year, increasingly paunchy and slack-shouldered, a walking apology? Why was it beyond his capacities to get back into shape, to cop an attitude, to stroll insouciantly into clubs in a black lizardskin suit with one sleeve cut off?

He couldn’t seem to manage that. He might as well have tried to run a three-minute mile, or become a virtuoso on the violin.

He’s still around. He pays his rent one way or another. He takes his love where he can find it. In late middle age he’s grown ironic, and cheerful in a toughened, seen-it-all way. He’s become possessed of a world-weary wit. He’s realized he can either descend into bitterness or become a wised-up holy fool. It’s better, it’s less mortifying, to be the guy who understands that the joke’s on him, and is the first to laugh when the punch line lands.

Most of his brothers back at the palace are on their second or third wives. Their children, having been cosseted and catered to all their lives, can be difficult. The princes spend their days knocking golden balls into silver cups, or skewering moths with their swords. At night they watch the jesters and jugglers and acrobats perform.

The twelfth brother can be found, most nights, in one of the bars on the city’s outer edges, the ones that cater to people who were only partly cured of their curses, or not cured at all. There’s the three-hundred-year-old woman who wasn’t specific enough when she spoke to the magic fish, and found herself crying, “No, wait, I meant alive and young forever,” into a suddenly empty sea. There’s the crownletted frog who can’t seem to truly love any of the women willing to kiss him, and break the spell. There’s the prince who’s spent years trying to determine the location of the comatose princess he’s meant to revive with a kiss, and has lately been less devoted to searching mountain and glen, more prone to bar-crawling, given to long stories about the girl who got away.

In such bars, a man with a single swan wing is considered lucky.

His life, he tells himself, is not the worst of all possible lives. Maybe that’s enough. Maybe that’s what there is to hope for—that it merely won’t get any worse.

Some nights, when he’s stumbled home smashed (there are many such nights), negotiated the five flights up to his apartment, turned on the TV, and passed out on the sofa, he awakes, hours later, as the first light grays the slats of the venetian blinds, with only his hangover for company, to find that he’s curled his wing over his chest and belly; or rather (he knows this to be impossible, and yet…) that the wing has curled itself, by its own volition, over him, both blanket and companion, his devoted resident alien, every bit as imploring and ardent and inconvenient as that mutt from the pound would have been. His dreadful familiar. His burden, his comrade.

*This story is reprinted by permission of HarperCollins Publishers Ltd© Michael Cunningham, 2015.