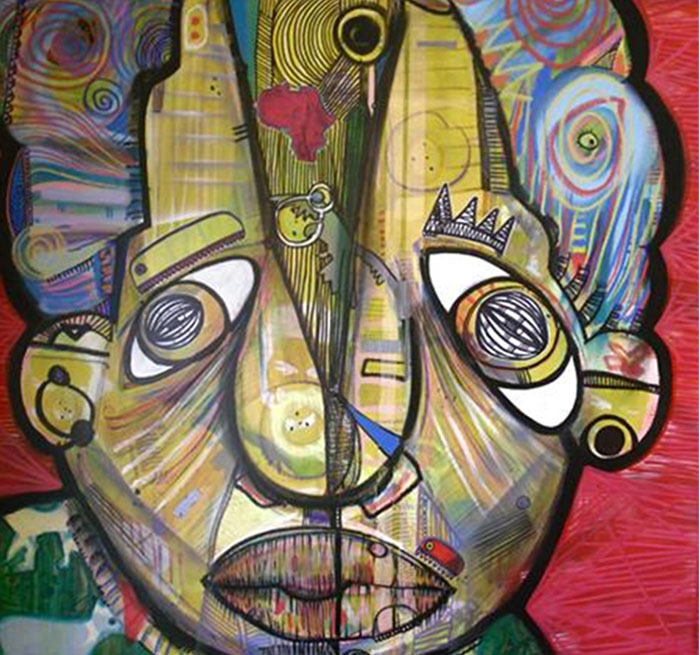 A Chapter from the novel, Black Foam

He placed the suitcase lightly into the tray, and then took off to meet it on the other side. However, the soldier across from him waved him back as he scrutinized the screen in front of him. The conveyer belt moved backwards, and as the suitcase emerged from the screener, everyone looked suspiciously at it and its owner. It moved again and disappeared inside the baggage screener. The man crossed over for a second time to wait for it on the other side, but once more the soldier sent it back to where it had come from. The owner of the suitcase wanted to ask what was going on, but by this time the soldier was busy talking to a coworker. He stepped forward slightly, only to receive a stern gesture to stay where he was. Looking in his wife’s direction, he saw that she had finished going through inspection and was anxiously waiting for him.

The line behind him had grown quite long by this time, and impatient grumbles were getting steadily louder. Faced with no other choice, the soldier instructed the man to step aside for his suitcase to be searched by hand, and gestured to those behind him to pass through. Once again, the man looked over to where his wife was standing. She was witness to what was happening, observing his public humiliation as two soldiers gingerly spread out the contents of his bag for all to see, eyeing him warily the entire time.

After being engrossed in what was happening to the Arab man in the neighboring line, Dawit snapped to attention at the sound of a soldier’s voice. Fearful of meeting the same fate, he placed his suitcase hesitantly onto the conveyor belt, then straightened up in anticipation. He waited for the bag as it passed slowly through the baggage screener, his eyes fixed on the security officer’s facial expression, which registered no reaction. He picked up his suitcase and turned to the officer, awaiting his decision, and saw him wave another traveler through.

He looked back at the Arab, who was still in the same spot, nervously chewing his nails as he watched his belongings being strewn about. When at last he got the signal to gather them up, his fellow travelers were passing through one after another without being stopped by either the machine or the security official.

Dawit felt sympathy toward the man, perhaps because he himself was all too familiar with the taste of humiliation. He had experienced it first in his home country. From there he had fled from the Blue Nile Valley to Northern Ethiopia. When he first reached Ethiopia’s Endabaguna Camp, he had jumped for joy despite his exhaustion after the lengthy, grueling escape. Yet, despite his initial relief and elation, he had grown wearily accustomed to being humiliated anew in his place of refuge.

It was a voyage of desperation that could have had only one of two outcomes: either arrival at the final destination, or death at the hands of border guards. Nevertheless, his existence in the forced conscription camp had become so meaningless that it made no difference to Daoud whether he lived or died. So, when he crossed the border amid scores of others, he was different from all the rest. Unlike them, he paused to look back. He wanted to take in the full reality of deliverance. He wanted to experience what it really felt like to be leaving humiliation and degradation behind once and for all. There, beyond the distant mountains that had drained his strength to the last drop as he had climbed some and skirted others, lay Eritrea. He felt no nostalgia at all. With every step he took on his journey of escape, nostalgic longing had fallen away from his spirit. He’d been purged by his growing distance from the Blue Nile Valley, emptying out his store of pain and distress in the attempt to come home to his spirit before it was caked with scars.

At the entrance to Endabaguna there was something else one needed to be delivered from, namely, an Ethiopian soldier who was using a whip to make new arrivals line up correctly. The whip missed Daoud and hit a woman behind him, who was so taken by surprise that she had no chance to get out of the way. Everybody was lined up in a snake-like fashion so that larger numbers could be accommodated in front of the registration office, and the soldier took pleasure in either keeping the lines in order or scattering them if they got too orderly on their own, finding sadistically artful ways of drawing their curves with his heavy lash.

The registration office served as the entrance to the sprawling camp. Beyond it lay scattered tents of varying sizes, most of them so threadbare that the blue UNHCR logos printed on them were hardly visible anymore. What with the thick crowds lined up in front of him, the slowness of the registration office bureaucracy, and the noonday sun beating down on people’s heads, the time crept by without Daoud’s turn coming. He sat down on the ground and busied himself drawing random circles in the sand. He ran his hand over his knotted black and white woolen wristband. He shut his eyes and saw black. He opened them again, and the sun, which had been lying in wait for him, hurt his pupils. He held his head between his knees and lifted it up again. Then he repeated the sequence, but nothing changed. He was still just as far from the registration office as he had been before.

Keeping his curiosity in check, Daoud resisted the urge to turn toward the source of the lowered voice. As much as he wanted to follow the conversation he’d picked up on between a couple of young men behind him, he was afraid that if he let on that he was listening, they might stop talking.

“Migration organizations won’t pay any attention to your file. I’ve heard that a lot. And they’ll make up excuses without giving you the real reason.”

Daoud knew Endabaguna was nothing but a reception camp and that for some there was a slight chance of resettlement in European countries, while the rest would be distributed among permanent camps in Ethiopia. This was what made him wish he could join in the conversation, make more inquiries. But the whispered exchange was obviously a confidential one. When a silence ensued, Daoud feared that the conversation might still be going on, but too softly for him to hear.

Rescued by the other young man’s question, he put his senses on high alert. Adjusting his sitting position, he managed to inch slightly backwards, his ears pricked for the answer he was looking for, and which was rather late in coming.

“Do what I did. I got rid of my identity papers and chose a Christian name.”

As sundown approached, Daoud stood outside the registration office, brushing off his clothes as he listened to the question being addressed to him. His head lowered, he gazed at the blank sheet of paper and the blue ink pen hovering over it. Then he lifted his gaze somewhat toward the dark hand with the protruding veins, and from there toward the angry-looking face that was waiting for his answer. The employee repeated his question irritably. As David ran his hand again over his knotted black and white woolen wristband, the employee filled in the box according to what he had heard: “David.”

“Bo’u nelech.”  In Hebrew: “Come on, let’s go.”   The group coming from Gondar followed the signal from a girl wearing a blue suit and holding a sign that read “Beta Israel” in Hebrew and Amharic. Looking as though they’d stepped straight out of some period of ancient history, this bewildered mass of black humanity piqued the interest of passersby who stopped on both sides to gawk at them, with some of them taking pictures.

In the middle of the group, Dawit pulled his head covering down in an attempt to cover as much of his face as possible. He still felt vulnerable and exposed, as though his features invited attention. For all he knew, his looks called out to passersby, telling them that he was a thief, and in possession of all the evidence of his crimes.

The group proceeded in a semicircular path that ended at a glass door. The door opened automatically, and as soon as it did, cries went up and a commotion erupted. Dawit couldn’t make out what was happening. The group had been thrown into confusion. Some of them wanted to go back inside, but the organizers ordered them to keep going.

“Lama ba’tem?! Lama ba’tem?!” Dawit’s ears were pierced by the screaming of a white girl, who was heatedly asking why they had come to Israel. He looked over at her, only to find her glaring at him. She had picked him out of the crowd to be the object of her enraged stares. Then he stopped hearing her shrieks. He was too busy looking at the greenish veins in her neck that were swollen with rage. When he reached the point closest to her, he averted his gaze and hurried past as her screams tried to overtake him. When he’d gotten some distance away, he looked back to see what was happening behind him. In the process, he bumped into a suitcase, knocking it accidentally out of the hand of its owner, who shoved him and lit into him with curses and insults. Leaning towards a woman next to him, the man grumbled, “These slaves have overrun the country!”

Without a word, Dawit moved quickly away, raising his hands in a gesture of silent apology. Then suddenly the man’s features stopped him up short. It was the Arab who had been searched by the soldiers in such an insulting way.

When he turned to be on his way and catch up with the group, his glance fell on a blue neon sign in bold Hebrew letters: “Broukhim haba’im li Yisrael: Welcome to Israel.”