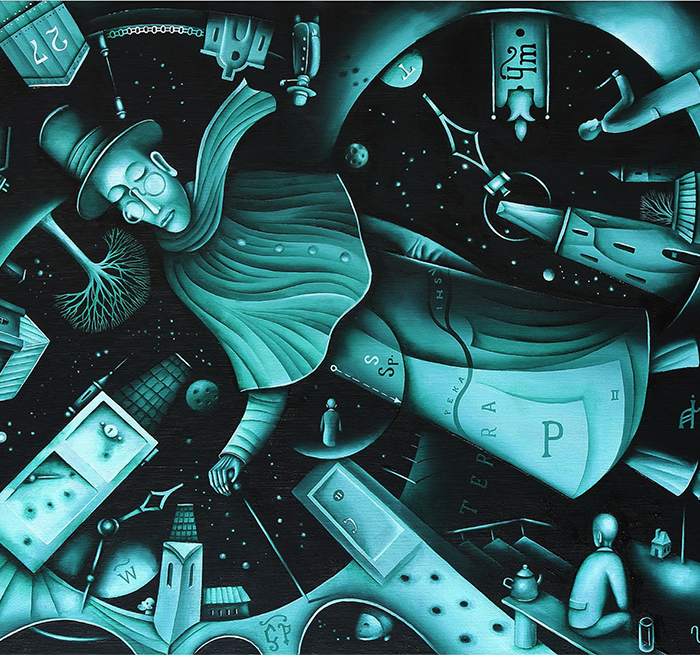 The Western train had just arrived at Redfern railway station with a lot of ordinary passengers and one swagman.

He was short, and stout, and bow-legged, and freckled, and sandy. He had red hair and small, twinkling, grey eyes, and — what often goes with such things — the expression of a born comedian. He was dressed in a ragged, well-washed print shirt, an old black waistcoat with a calico back, a pair of cloudy moleskins patched at the knees and held up by a plaited greenhide belt buckled loosely round his hips, a pair of well-worn, fuzzy blucher boots, and a soft felt hat, green with age, and with no brim worth mentioning, and no crown to speak of. He swung a swag on to the platform, shouldered it, pulled out a billy and water-bag, and then went to a dog-box in the brake van.

Five minutes later he appeared on the edge of the cab platform, with an anxious-looking cattle-dog crouching against his legs, and one end of the chain in his hand. He eased down the swag against a post, turned his face to the city, tilted his hat forward, and scratched the well-developed back of his head with a little finger. He seemed undecided what track to take.

The swagman turned slowly and regarded cabby with a quiet grin.

“Well,” he said, “you’re the first man that has thought so these ten years. What do I want with a cab?”

“To go where you’re going, of course.”

“And I didn’t say you said I did…  Now, I’ve been on the track this five years. I’ve tramped two thousan’ miles since last Chris’mas, and I don’t see why I can’t tramp the last mile. Do you think my old dog wants a cab?”

The dog shivered and whimpered; he seemed to want to get away from the crowd.

“But then, you see, you ain’t going to carry that swag through the streets, are you?” asked the cabman.

The traveller up-ended his bluey against his knee, gave it an affectionate pat, and then straightened himself up and looked fixedly at the cabman.

“Now, look here!” he said, sternly and impressively, “can you see anything wrong with that old swag o’ mine?”

He lifted the swag by the twisted towel which served for a shoulder-strap, swung it into the cab, got in himself and hauled the dog after him.

“You can drive me somewhere where I can leave my swag and dog while I get some decent clothes to see a tailor in,” he said to the cabman. “My old dog ain’t used to cabs, you see.”

Then he added, reflectively: “I drove a cab myself, once, for five years in Sydney.”

Coming Down From Thu. to Wed. / Eugene Ivanov