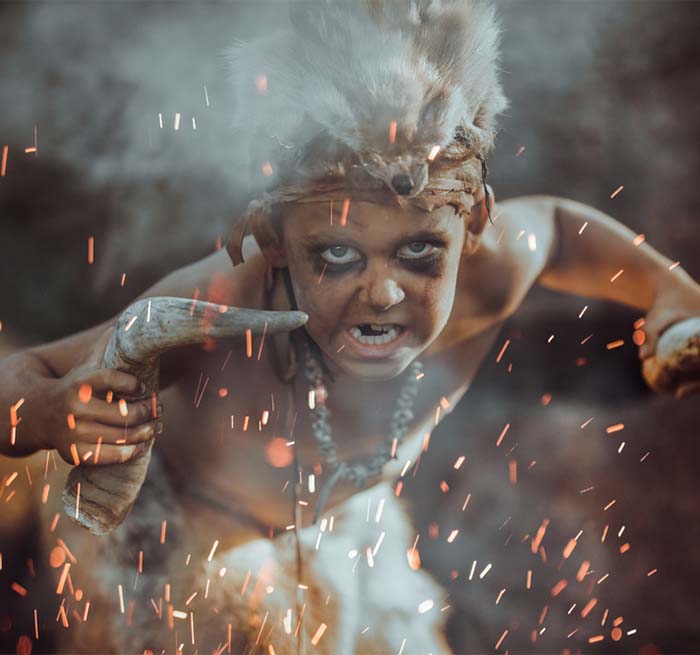 In the year 3000AD, after many years of wars – world wars, civil wars, religious wars ­– after the heavens grew angry and smote the waters with meteorites from a vengeful hell, then there came thunderbolts, volcanoes, and hurricanes, along with centuries of disease and famine. Mankind almost became extinct on Earth. All the continents with their inhabitants were wiped out. The oceans dried up, leaving deep and terrifying canyons. The only survivors lived in a large underground cave dug out by a meteorite centuries before.

Only one hundred were left. They wore animal skins and armed themselves with stones. They rested their heads on their arms as pillows when they slept and ate grass from a small green pasture that grew by a stagnant pool. They had no names and no language but communicated with signs, and referred to each other by numbers. Eighty men, fifteen women, and five children were all that remained of humankind.

They had no need for language to perceive that they were the last remnants on Earth, the last hope for the regeneration of humanity. They huddled together like a herd, clinging to life with what claws they had left, and vowed to stay together to save the planet. They went out to pasture every morning and chewed the grass like sheep, rolled on the ground by the pool like dogs, then went back at sunset to settle down in the cave-like bats. One day, after everyone was back in the cave and they had started counting, as usual, to make sure everyone was safe, they were startled to find that Number 9 wasn’t there.

“Where has Number 9 vanished?”  they asked.

The survivors were wide-eyed in alarm, their hearts trembled in fear and their faces showed real anxiety at this strange disappearance since no one had disappeared for more than ten years. After hours of disheartened and sullen silence, Number 9 came into the cave with a broad smile and his brow covered in sweat. Like a statue, he stood smiling in front of them, and before anyone could reproach him for his absence, he opened his arms as if to pray, like the people who believed in the Lord of Heaven before all of them were wiped from the face of the Earth.

He smiled again, rather stupidly this time, and his hands revealed a silver-coloured pendant with rusty edges and a large heart in the middle attached to a leather strap. Everyone looked at the pendant with great interest and amazement. Then a giant of a man with enormous limbs and grey hair stepped forward. It was clear from his beard and his wrinkles that he was the oldest man there. The man, who was called Number 100, looked at Number 9 angrily, as if to say, “Where have you been?” Number 9 just raised his arms to show him the pendant.

Things changed after that. Number 9 became the centre of attention and acquired a new and singular importance. He was the only man that wherever he sat or went eyes followed. Everyone wanted to be friends with him and hoped to get close to him and take pride in his acquaintance. He was the man with the silver pendant; lucky the one who laughed with him, luckier still the one who went out to pasture with him at dawn. Luckiest of all humankind were those he let touch the pendant – something that seldom happened.

Women fought to win his affection, his heart, and his pendant. One woman made eyes at him, another tried to lure him with her enormous breasts and a third stripped naked in front of him. The most daring was a woman who pounced on him while he was asleep.

Jealousy poisoned relationships between the men and their eyes showed signs of hatred and resentment, envy and malice. Deep inside, they harboured evil designs and thoughts of violence to come. Then they split into camps. The old man Number 100 and some of his number supporters thought that the pendant was a wicked innovation and should be thrown into the pool. Others, led by Number 10, disagreed. They believed in freedom and his right to private property. The rest were neutral. In this way, the cave was divided for the first time.

One morning two men had an argument. One of them liked the man with the pendant, while the other hated him. The argument escalated, grew heated, until finally, the first man killed the second by crushing his skull with a large rock. A court was convened, the people naked but for animal skins. Number 100 ruled that the pendant should be disposed of immediately. Number 9 refused to hand over his pendant so they sentenced him to death for breaking the law. They dragged him to the pool and four strong men sat on top of him to drown him. After that, the pendant was taken and handed over to Number 100, the leader, who was meant to get rid of it and put an end to its baneful influence. It was a shock as devastating as a funeral when Number 100 appeared the next day wearing the pendant on his chest like a bride. Two nights later Number 100 was murdered and the pendant disappeared. Suspicions spread like wildfire and people traded accusations. Many groups were formed – those for and those against, the greedy, the hateful, the envious. They divided up, entrenched, regrouped and fell out, disagreed and clashed. Then they fought and slaughtered and exterminated each other.

A few months later the only survivor was a young boy. He sat in a cave holding a small silver pendant with rusty edges that had wiped out the last remnant of humankind.