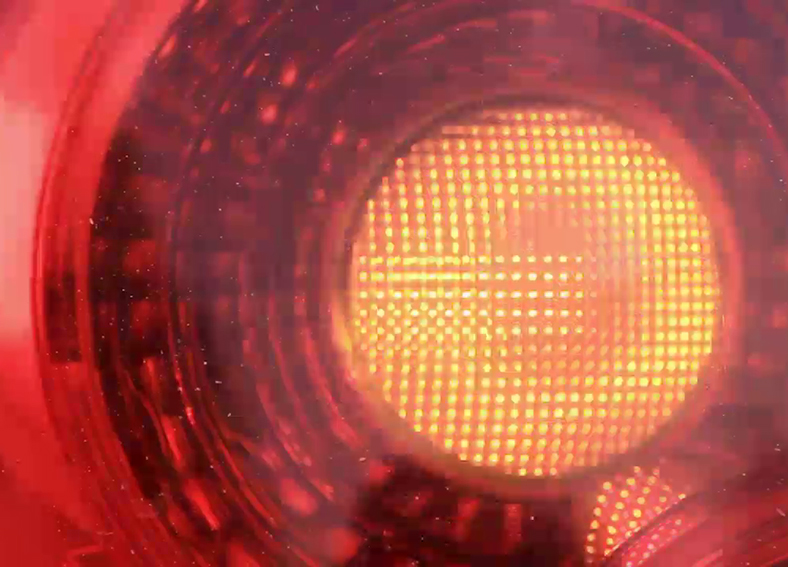 False Alarm is a concise, “flat” story that hides a layer of sophistication behind its seemingly simple facade. It draws from the genre of fantastic hyperbole, a form of the Latin-American fantastic (Garcia Marquez being it’s foremost representative), which takes a situation or an ordinary event and stretches it beyond the limits of reality (like rain that will not subside for four years). Hernandez stops just at the brink; the events are dramatic and exaggerated, but do not slide over into the fantastic, thus managing to infuse the plot, which starts off as banal, with suspense and dark humor.

I watched him as he walked, scrutinizing his gait. He had a carefree, insouciant, irresponsible swagger. He didn’t give a damn how long the thing was howling for: minutes, hours, a day or even days. I looked at his clothes. He wore blue chinos and a white sports coat. Underneath it was a checked shirt. He stopped for a moment, looking for his key ring. He was a young guy. I came out of my hiding place and pointed my gun at him.

He looked at me, blinking in surprise. His hands trembled. His key ring fell to the ground. I pressed the pistol against his temple.

“Silence! And switch off your fucking car!”

He bent down, and did as I told him. I noticed that he had closed his eyes. He might have been praying.

He pressed the wrong button. The alarm kept going. I took the pistol by the barrel and hit him in the head with the butt. He fell backwards with a painful groan. He was drunk as well as scared. Poor fool.

I picked up the key ring and put a stop to the infernal racket myself.

“Now you’re going to open the doors,” I told him. “And no more fumbling.”

He nodded and mumbled something that I didn’t catch. I thought that my posture should reflect real determination. A kind of moral conviction, let’s say. The guy didn’t try to offer me money, or take out his wallet or do any of the other stupid things that one might expect from a man in his situation. This filled me with confidence.

There were two beeps, then a click indicating that the centralized locking mechanism had unlocked. I aimed the gun at him again and motioned to him to get in. I got into the back seat, a little uncomfortably. Items of clothing were strewn over the seats: shirts, trousers, a jacket or two. I threw them all out onto the road. The headrests were covered in transparent plastic, the car still smelled new. Everything in it looked brand new, except for the driver.

“I can smell your fear, you son of a bitch. Are you scared?”

“Friend, please don’t hurt me. I’ll give you anything you want.”

“I want you to drive. Switch on the engine and go straight down the street. Don’t go over thirty, or I’ll shoot.”

He obeyed. Maybe he’d have been less willing if he knew that I’d never used a gun before. The lights on the panel came on. The interior filled with blinking green and yellow light. The clock on the dashboard read four-thirty. The car started off pleasantly, quietly.

He tried to answer but he was stammering. I didn’t let him speak:

“It’s early on Monday morning. Your car has been screaming since Saturday night. The piece of junk was going all day yesterday. I thought that it would stop at some point. I said to myself: ‘Be patient, the owner will have to come to stop it soon.’ But you didn’t. You’ve only just turned up. Listen: I have to correct exams for tomorrow. A lot of exams. I’m a teacher and I have responsibilities, I can’t fulfil them if I have to hear a godawful noise blaring all day and night. I need to keep my mind at peace to concentrate. I need silence, do you understand? Turn right here.”

The guy did. He also sighed. Maybe he was relieved that he wasn’t dealing with an ordinary thief. Maybe he thought that his situation wasn’t so bad if a professional, a guy with a teaching degree rather than a common criminal, was the person threatening him from the back seat.

The car started to go downhill. It was an inevitable risk: we had to go down one of the streets. The guy could have tried letting go of the brake, pressing on the accelerator and crashing into something. Or perhaps his nerves were getting the better of him, especially given that he was still pretty drunk. I duly warned him against this and other possibilities. He had the sense to do things properly and not try anything stupid over the three blocks we had to go downhill.

We continued in silence until we reached our destination: a bend in the road where a decrepit dock stretched out into the water. We didn’t pass anyone on our short journey.

“Now, get out,” I said, after we had parked on the hard shoulder. I kept my eyes on him. I waved my gun towards the old dock. He closed his eyes and let out a stream of supplications.

“Stop it! I don’t want to see your tears or hear your whining. You’re going to behave like a man. Take responsibility for your actions!”

“Please, I… I didn’t know! I was far away! If I’d heard the alarm I would have gone to see what was wrong, I’d have switched it off. Please don’t hurt me. I have a son…”

Maybe he wasn’t expecting the question.

“I… I had something I had to do… far away, well not very far but a few blocks away from where…”

“Why did you leave the car in front of my house?”

“I didn’t know it was your house, friend!”

“I’m not your friend! If you say that again, I’ll put a bullet in your leg.”

“No! It’s not OK! You didn’t know it was my house, you didn’t know who I was at all. It just happened to be mine, but it could have belonged to someone who was bedridden, to a family with children who need their sleep, who need to rest, or just someone who enjoys silence and can’t have it because of some irresponsible idiot, a thoughtless moron, someone who messes with people’s rest and peace and quiet. And all because he was drinking! Am I wrong?”

We’d got to the dock. He was pissing himself.

“Forestry huh? Why? So you can treat the environment with the same thoughtlessness? Just thinking about yourself, not giving a shit about people’s wellbeing? I’m not surprised. Your whole generation thinks the same way. You’re selfish brutes. You say you have a child. How old is he?”

“He has no idea how close he is to becoming an orphan, the poor thing.”

He broke down. He fell to his knees and covered his face with his hands. I forbade him from screaming and made him crawl across the dock. I took out a rope and tied his hands to a post to one side of it. My knots were clumsy, I don’t have much experience with ropes, but that didn’t matter. Snot ran down over his lips.

I went back to the car, which still had the key in the ignition. I released the hand brake and pushed it to the edge of the fragile wooden platform, which creaked a little. The end tilted visibly, twenty, or twenty-five degrees.

“Please, I’ll pay you whatever you want, I’ll compensate you. Please.”

I hit him in the face again. That was the moment the dock gave way and collapsed. It hung over a shallow part of the river, so the car fell mainly onto rocks and rubbish in an earsplitting crash. A group of rats came running from out of the shadows. The alarm started to sound.

“This is so you know,” I told him, “that when you really need your alarm, no-one’s going to notice it.”

I left him behind with his snivelling and that horrible sound. I walked two blocks until I got to where my old truck was parked: in an alleyway, out of sight. I got in and drove home. I still had about thirty exams to correct.