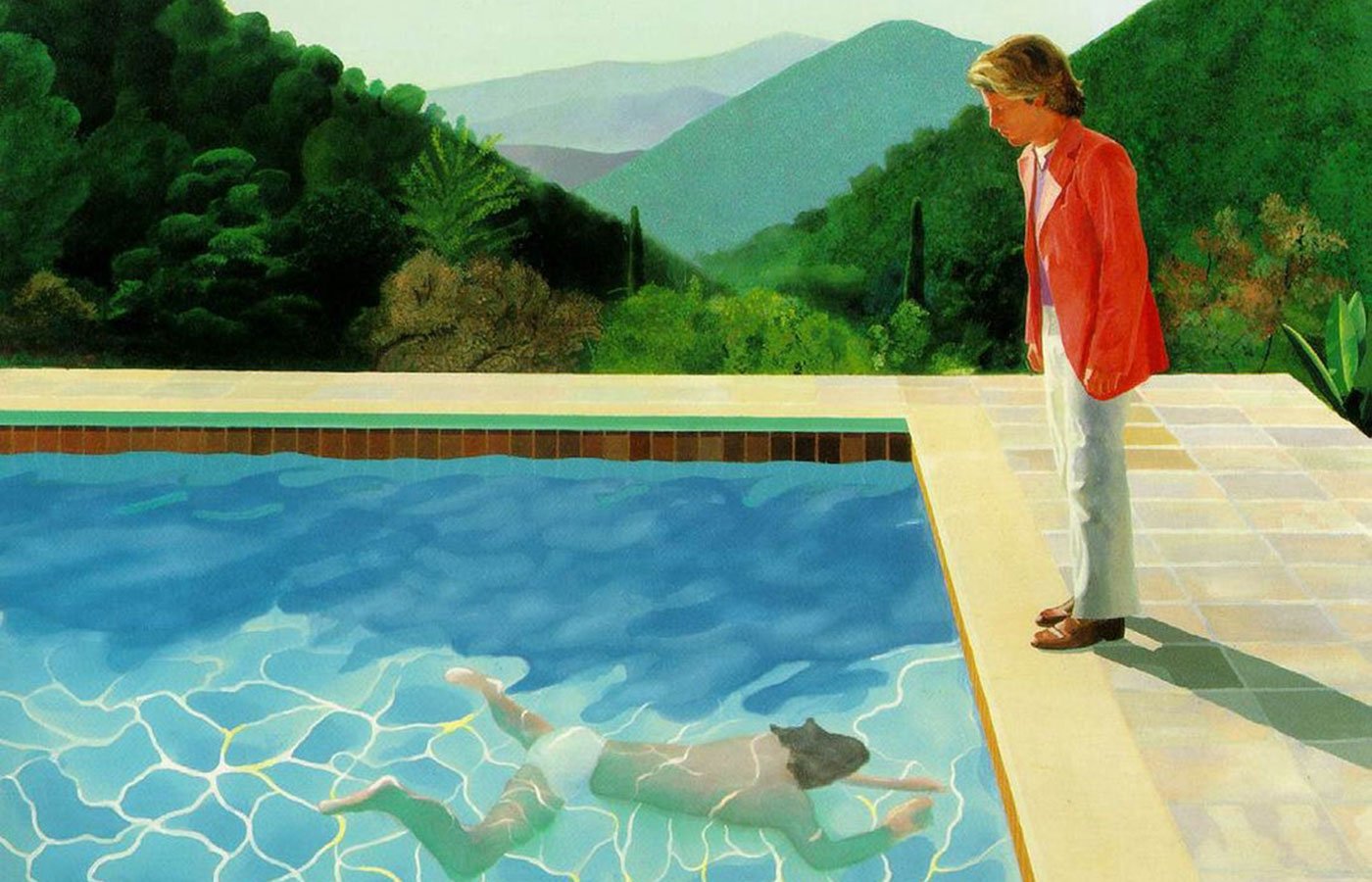 Quick and glittering as a spun coin, George’s Wife turns on a mystery, an absence. It’s about a vertiginous view of what was either a tragedy or the perfect crime. The case is one of failing to aid at the scene of an accident – the legalese for the neglect of the duty to rescue those in peril. The essential human metaphor at the heart of this mock detective story. Casually sly, the story is full of sharp satire, so lightly and blamelessly done that Veronique Bizot almost seems to do it by accident, while talking of something else entirely. It’s a clever feint (against whom? the format? the reader? herself?). Prose like a card-trick, absorbing, deflecting and distracting.

And with Bizot, it’s all about that distraction, one that, paradoxically illuminates and explains.

Through the strange, watchful gaze of his wheelchair-bound neighbour, we watch a man constantly and obsessively clean the pool in which he never swims. The pool in which his wife died. A tragic mishap. All is calm and slow in the sleepy but threatening sunshine. Bizot’s prose lightly walks a tightrope of tone and mood, delicately balanced but swiftly turning, speeding and slowing, defying the possibility of a stumble. Even her punctuation brims with acrobatic archness, pointed, humorous – a flickering, teetering balance between dance and battle. In a story that is written like a sparring match. In a universe where darkness can bring light, a light that can be simultaneously merciless but comforting. It tastes like a poolside drink, a chaser of transparency to follow a slug of hard liquor (French has no word for that most necessary drink, the chaser, the drink that lubricates and justifies the previous one). Despite being French, it’s a drink that Bizot pours very well. L’chaim.

From my patio, I can see George at the edge of his pool, thirty yards down the hillside. A thicket separates us, which covers an incline of red, cracked earth, bordered on both sides by walls of dry stone. George is in his swimsuit and sandals, and is wearing sunglasses from the 70s which, I know because we bought them together, cover the upper halves of his cheeks, like two fat drops of water just about to fall, and which don’t suit him. George’s pool has a kind of bean shape that recalls the shape of his sunglasses and even though every morning he comes out to analyze the pH balance and slowly drag a net across the surface to collect debris, he never swims there, neither he nor anyone else for that matter, except the wasps. The wasps, who make George nervous, and against whom he has set every kind of trap, clump along the edge of his pool. I see him sometimes crush one under his foot, then rub the sole of his shoe against the sparse grass in his yard. No longer does he raise his head in the direction of my patio, so I can watch him as long as I want while he is maintaining his pool – every morning the same ritual. Quite often I fall asleep beneath my sun umbrella, until Louis brings me lunch, with the mail and two newspapers. Then I make a few quick, impersonal phone calls. George, at this hour, has abandoned his pool and I suppose gone back into his house, of which I can only make out the tip of the roof. On that side, fairly tall and dense trees block the view I might have of George’s patio, a hideous slab of flambé flagstone, overhung by a striped orange awning trimmed with grayish fringe, underneath which I imagine him seated, like me, motionless. He might have put on a shirt and served himself a glass of something – I don’t know whether or not he has completely given up drinking. Our two houses are the lowest and the most modest in the development, both dating from the 50s, both fairly ugly, although George’s is particularly so – all his attempts at improvement only made things worse, and it is not rare for people who are lost to come ringing his doorbell, convinced they are ringing at the caretaker’s house.

Underneath the noonday sun, George’s pool forms a gleaming spot that doesn’t turn blue again until later in the day. Also gleaming is the enormous red sign of the Champion supermarket, whose customers now include the most influential hillside residents, the very same ones who had initially worked so determinedly to ensure its immediate demolition. From what I hear, Champion meat, especially Champion veal, is remarkable, and the Champion butcher can size up, in a single glance, who he’s dealing with. Wherever you are invited to dinner around here, you are now served Champion veal, prepared in every kind of sauce and reputed to be so tender that no one is offended anymore by the sign which, lit up day and night, can be seen from every patio, including the Klausens’ patio, highest of them all, and where, defeated by Susi Klausen’s insistence and her endless telephone calls since June, I finally had dinner last night. Last night, after having resisted their solicitations for over a month, I subjected myself to the Klausens’ house, the Klausens’ champagne, the Klausens’ conversation, and while Louis was taking me to their house, I thought about what awaited me there, Rolf Klausen in his yachtsman’s outfit, leaning against his balustrade as if against the railing of a ship, Susi Klausen appearing, like a bolt of lightning, out of nowhere, to dismiss Louis with a sweep of her hand, seize the handles of my wheelchair, and, with the dexterity of the nurse she had been before getting Rolf Klausen in her clutches, whip it suddenly in the direction of the rectangle of lawn dedicated to aperitifs. There, lit by tiny spotlights, were a mix of botanical species, sculptures, and guests, bearing testimony to the use Susi Klausen makes of Rolf Klausen’s millions, the latter who, invariably affable, displayed, as he did at every party, a studied bonhomie, awaiting the moment when he could go off to bed. And last night I found myself shaking Rolf Klausen’s hand as if I were shaking the hand of the good and amiable man he appeared to be, all the while perfectly aware that I was shaking the hand of a crook, and as I was shaking Rolf Klausen’s hand and then those of the guests, I could still hear George’s voice, the voice I miss, declaring that the entire hillside is nothing but a pile of crooked businessmen. In each of the houses on this hillside, George would say, when we were still friends, there is a con man who has lived his murderous existence in perfect legality, completely devoted to speculation. And the money he has made, he recycles into art foundations and art galleries and museums worldwide, wherever there is art, George would say, there is a crook who, along with art, buys himself an artistic conscience, even though he understands nothing about art, even though art bores the shit out of him, he has, nevertheless, perfectly understood and evaluated all the profit, with regards to respectability, he can extract from art. George, back when the Klausens first moved to the hillside, was an art critic and it was as an art critic that he was invited to dinner at the Klausens, only once, after which the Klausens did not want to hear anymore about George, either because he had subjected the paintings with which the Klausens covered the walls of their new home to his criticisms, or else because he had contented himself to walk past them without uttering a single word, or had lifted Susi Klausen’s skirt at the moment when she was offering him a plate of hors d’oeuvres, one way or another George managed to avoid ever getting invited again.

And while Susi Klausen, who had positioned my wheelchair with its back to a shallow pool whose moisture spread diffusely across the small of my back, recounted the burglary of which they had been victims that very afternoon – a small Renaissance-era bronze that was still in the living room when she had come down from the second floor at five-thirty on the dot to go to the kitchen, was no longer there when she came back out some ten minutes later – I was thinking that I myself was not so lucky, as to be done with the Klausens’ invitations. It would have been, Susi Klausen was saying, just as easy to take this or that painting down from the living room walls, because naturally the alarm system to which each painting was connected was not activated during the day. But, overlooking the paintings, they had only taken the little Renaissance bronze, as well as a table lighter next to it, so that the policemen were leaning towards the theory of an amateur burglary, the first of the season, according to them. At that moment, each of the guests, pretending to be interested in the Klausens’ burglary, must have actually been worrying about his own house and the doors and windows that he had perhaps neglected to lock, I hope that you have all taken precautions, went on Susi Klausen, come on, said Rolf Klausen calmly, after all, we’re pretty well protected here, proof positive, countered Susi Klausen with bitterness. Believe it or not, she added, it’s my table lighter that I most regret, we’d been using that lighter for years, and everyone knows a table lighter that works after the first twenty-four hours is priceless. The woman seated to my right turned towards me, looked at me with her head slightly cocked, and I had yet again to acknowledge the strange attraction that it has on certain people, this wheelchair, without which I cannot go anywhere since a year ago now, when I was ejected from George’s car. The woman had placed her hand on the wheel of the chair that she was stroking slowly with her index finger. Her husband, or at least the man I finally understood to be her husband, was extremely old. He must have been the famous Genevan philosopher whose presence Susi Klausen had mentioned to me. His wife, roughly thirty years his junior, had vaguely red, frothy hair, a dress with a loose neckline, and was speaking quickly, with the false gaiety of a melancholic, they had rented one of the houses on the hillside for the summer, probably the only house on the hillside without a pool, she announced, smiling, and I did not disabuse her of the idea, although I myself have never had a pool, except George’s, George’s pool was always enough for me, but what were we waiting for to be seated at table?

The story is now added to your reading wish list. All the stories you want to read are waiting for you in your new personal area
try it
8
Fernanda Melchor