In View of the Geese 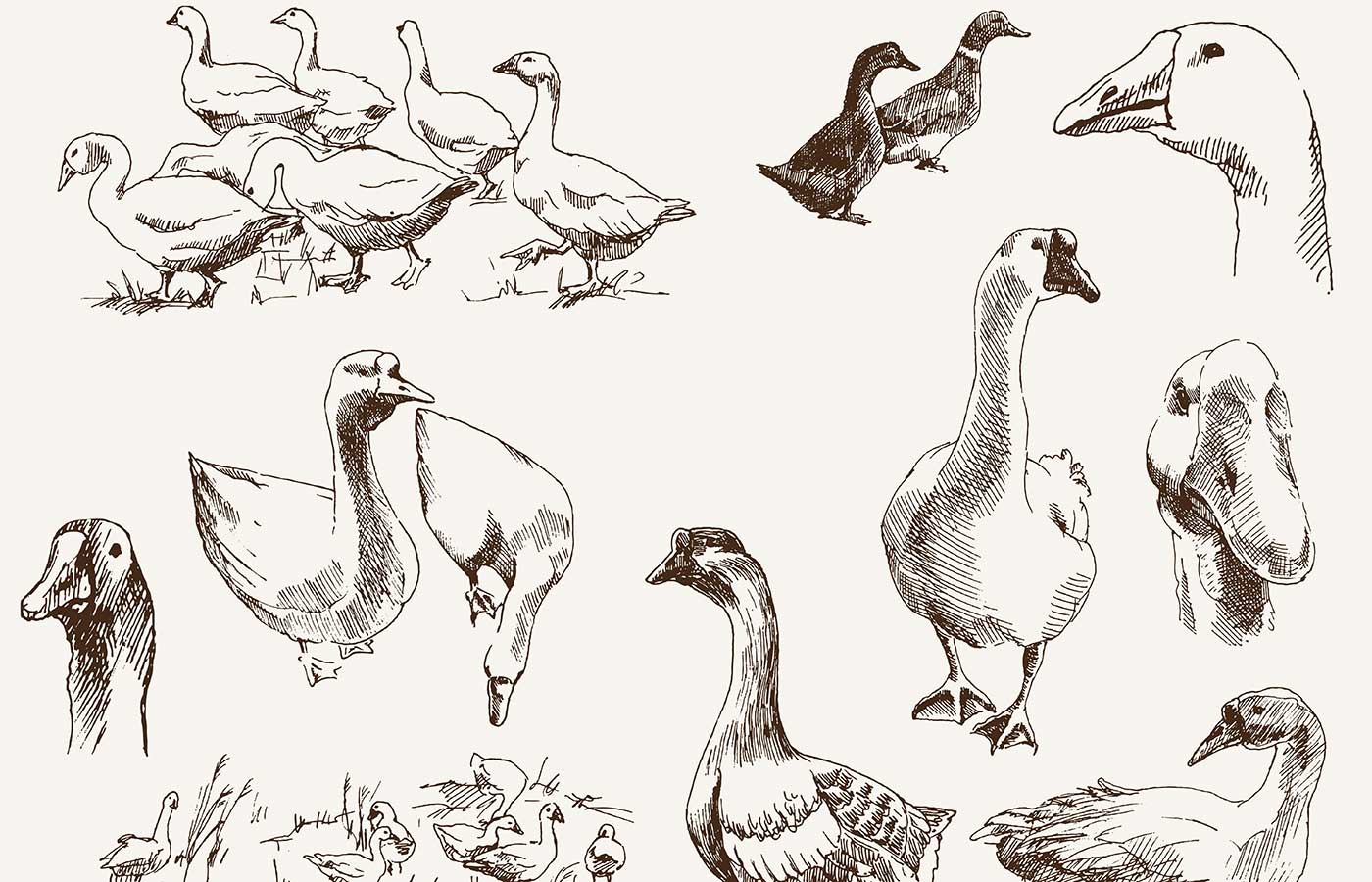 In View of the Geese

What you might think just after you’ve said goodbye to him and just before you leave the house:

2. Is that her in the photo on the wall?

3. She’s standing in front of a not very high wooden fence separating her from a small herd of geese, you might think. Her body taut, her head thrown back. You can’t see where she’s looking.

If you don’t walk straight past you see a photo she would never have hung on the wall when she was alive: standing in front of her fence, in front of her geese, while they waddle happily through the shallow puddles almost everywhere around their fanned feet. The geese aren’t looking at her, they’re looking at each other or at their own feathers. Their plumage isn’t dirty; quite the opposite, it’s very white. Some of them don’t have their beaks pressed to their chests; they are stretching their necks as though trying not to cross the puddles but to heave themselves out of them. And she too, you might think, looks like she’s trying to get herself out of something, out of a great big mess into extremely clean air, so deliberately strained that she must have briefly forgotten all notions of cleanliness she acquired over the years.

That she must not have noticed being photographed, her behaviour becoming a picture. She never engaged in excesses of the body; at most of her mouth. A remarkable number of people poorly disposed to her for certain reasons – idiotic reasons, she said – had died shortly after she quietly cursed them.

The path in the photo would lead her to the house, were she to continue along it: alongside the fence, over the edge of the photo, to the place where her photo is being looked at now, this picture of a body collapsed in almost stubborn permanence, which seems to have straightened up very suddenly, vertically towards the sun, towards the wind blowing on high, into which she has stretched. That’s how she’s standing there in front of the fence while on the other side of it common or garden geese waddle, avoiding looking at her directly as consistently as if that gaze had been practiced for centuries from the Baltic Sea to the Atlantic Ocean, migrating birds having flown it in from the most African of all countries and dropped it from the air onto these animals like heavenly providence.

At their feet, vaguely visible: goosegrass, gooseberries, gooseneck loosestrife, gooseplant, gooseweed. Geese live on an earth named only after them, which expands productively upwards every morning out of growing gratitude at being sidestepped, until its foreseeable end, a fence. On the sidestep is where she is, not looking around and not noticing she’s being photographed. Her arms outstretched alongside her, ahead of her dull wood, above her circling air.

She never behaved that way, neither outside nor inside this house she had moved into, coming from the town. For love – later she said: for sheer idiocy – she had married a man who had joined Hitler’s bodyguards at the age of 18; later, he gained a PhD in ornithology.

The camera had collapsed her and only unfolded her again over a sheet of paper, in a generous gesture – indiscernible whether she was the depicted or responsible for the depicting, on this narrowly passing rectangle of wall you’re standing in front of now: with him. And about which he’s attempting to provide information; in other words, he goes over to his books, opens them and closes them and does so again three rooms along, as you hear him murmuring: Deuterostomia, Deuterostomia. That’s the superphylum of all goose species, in ornithological terms, but what’s the phylum? It must be here somewhere – and also, why insight comes about by hitting something to make it open and hitting so that it closes.

By the side of the tiny herd of geese is a tiny stream. The water flows horizontally into the air, from right to left – against the motion of the thoughts circling above the photo. Possibly, as opposed to their peculiar eye contact behaviour, the geese’s sounds, albeit proceeding on invisible paths, were directed at the person standing by the fence, especially the lower and stronger, female sounds. Possibly, the geese were not chattering but screeching. Possibly, that’s why their beaks are so wide open. Possibly, she was screeching back, her head tipped, vertical into mid-air. Her body launching itself upwards as she screamed, a motion she hadn’t made for a very long time, or only in secret. Cursing someone as she did so, this time very loudly because she was alone. Possibly, that’s why the photographer never showed the photo to anyone but her, and he survived because he hid the evidence of her acrobatic soul from others until her death. Whereby the question in that case would be: with what intent did the photographer want to photograph her; had the camera happened upon her by chance; or had she perhaps cursed him audibly days before and he had been trying ever since, sweating with fear, to capture her in a position undepictable for her, an inconceivably depictable position, and to blackmail her with it. – Possibly, she had said nothing in view of the geese, in view of a subphylum from the superphylum of Deuterostomia; possibly, the air had been taut around her in the pose caught in black and white, taut as a net with hard or thin thread, at its loosest around her chest and tightest at her neck; possibly, she had realized how pretty and useless perspectives are when everything is so close to you, even if everything close immediately vanishes, like the brightness does in the evening, having spent all day shining from a sky filled to the brim with light.

Will he come up with the correct ornithological term for the phylum if he chants the Latin name of the superphylum to himself, as he’s doing now?

Above the white-feathered heads, the outstretched head in front of which she is stretched out: the pale leaves of the hornbeams, or white beeches. Are they too, going by the logic of the previous plant names, named after the animals beneath them? The leaves of the white beeches hang close to their branches and the branches don’t grow far away from their trunk, the whole ensemble more shrub than tree.

You might think: her parting looks rather messy in the otherwise very neat surroundings.

The hornbeams are still standing back there, you might think, just after you’ve said goodbye to him a second time and just before you leave the house. The fence still in front of it. In front of that the path. Walks are taken along the fence and glances are cast over it as you leave the house. Among the walkers is a child who tries to stop and look through the fence, his hand held by another walker’s hand. The child is very small and clumsy and tries hard to see what the fence posts alternately hide and reveal:

the subfamily of geese.

The weather was excellent that day, you hear him calling inside the house, as if searching for you and then at a window: The clouds stood still above the geese, not moving an inch!

The child doesn’t manage to stand still. The fence posts the child is pulled past recall eyelids, fluttering and blurring what is seen; if they were mouths they would chatter without revealing anything of what they were saying. The child tries nonetheless to get through to the hidden things behind the fence, at least with his eyes. It doesn’t look as though the child might be lifted up so as to see more. Someone tugs at his arm (the same someone who was holding his hand) and tugs at his arm until all walkers have passed the fence; continuing along the path, the child’s head is slowly lowered, so slowly that it’s hard to watch the disappointed onlooker.