Insurrection – A chapter from “The Gorilla” 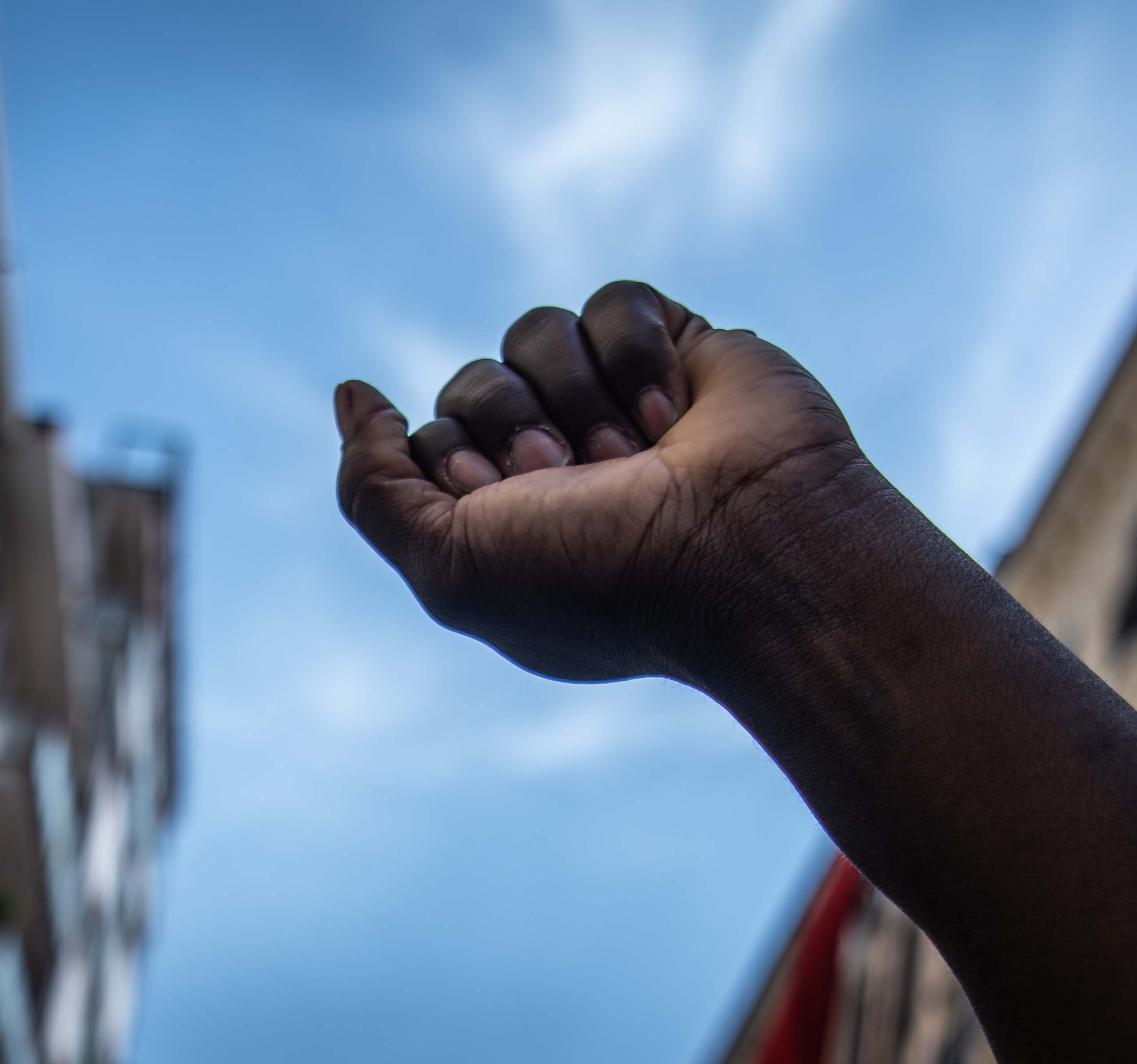 Insurrection – A chapter from “The Gorilla”

This is the first chapter of a novel called “The Gorilla” by the Tunisian writer Kamal Riahi which was published in 2011 by Alsaki Publishing house, Beirut. The story of the novel is based on a real event that took place in Tunisia a few years earlier. In the summer of 2009, citizens in the Tunisian capital were surprised to see a man climbing the clock tower that symbolizes the previous regime of Ben Ali. There was great confusion in the street, and the security men could not persuade the man to leave the tower. He stayed there for seven hours and then went down. Since then people have not heard anything about him.

Riahi noticed this event and decided to write the imaginary biography of the mysterious man who burst into the tower. This chapter tells the story of a black man who climbs the tower in daylight and refuses to come down. Under the tower, people gather in a scene that reminds us of the film “King Kong”, and the protagonist gets the nickname “Gorilla”–which his friends originally gave him because of his skin color. From there, the novel opens an essential discussion about discrimination and racism in Tunisian society. The hero tells the story of his life and the suffering he undergoes in a racist society in a corrupt regime, and that the time has come to replace it

About one o’clock in the afternoon. The wind is busy rolling along some beer-can that has been drained of its contents in the deserted street. A massive silence links the arch of the Sea Gate with the enormous clocktower The clocktower in November 7 Square is a symbol of the coup mounted by General Zine al-Abidine ben Ali against President Habib Bourguiba on November 7, 1987. The clocktower stands where a statue of Bourguiba stood before. [note/] where Mohamed V Street crosses Avenue Habib Bourguiba. The tranquillity of the deserted capital city is disturbed by its well-known nutter: a paranoiac who circles the tower for the last time then starts pushing people away, warning them of the poisonous hands of the clock high above. He then starts to throw stones, pieces of iron, houses, trees, crows and goats at imaginary enemies; things that are invisible to anyone else. He imagines that he is picking them up from the marble base of the wrought-iron clocktower that flaunts itself like a whore in the last years of the struggle. People have forgotten the days of forced disappearances and fear. Not a single person has disappeared for a year or more. People are enjoying the sacred siesta of August. The temperature is over fifty degrees, and the devil of midday picks the crab lice caught in transient lust from its crotch.

Ambulance and police sirens suddenly massacre the slumbering siesta, and everyone rushes, with the traces of drowsiness and dried semen stains still on them, to the street of streets. Something is happening at the lofty clocktower. Cordons of police officers surround the place. Rapid intervention forces hide behind cold helmets, and press back with batons the onlookers at whom car horns honk from every direction. Human beings without number look up to the top of the stern clock. A small remote figure, apparently no bigger than a finger is climbing the clock-tower with the speed of a cockroach. Everybody is amazed. He is about to announce the end of the world.

Necks strain to look at the bold climber who has reached the top of the clock and is holding on to one of its hands. He takes a water-bottle out of his back pocket, has a drink and then empties what is left over his head. He removes his leather belt and secures himself with it to some iron rings, and turns to the crowds that have gathered below like ants. Nervous policemen surround the crowds and run in all directions talking into their radio sets. Gesturing nervously they ask the man up there to come down: up there is out of bounds. Meanwhile he mutters something, the content of which is lost in the air. Only fragments of what he says fall like droppings from a ram. There is a movement of his left hand and he waves right and left, indicating his refusal to come down. The police carry on pushing back the people who are circling the tower like dung beetles. They try to ban any photography, to silence voices and to prevent mobile phone cameras being focussed on the hands of the clock. Traffic comes to a standstill and the car engines throb like the veins of a hundred metre sprinter on the starting line.

Something serious is going on. No one has been bold enough to get near the clock for the two years since a soccer fan fell off it in a delirium of happiness after his team won the President of the Republic Cup. On that day, the water bubbling up from the fancy fountain beneath the clock turned into a pool of red. From that evening the clock was subject to strict surveillance: it occupied a strategic site in the heart of the capital, regardless of what the nutter sometimes said about it.

The crowds grow and the front rows are reinvigorated by tourists who pour in from the beaches and from hotels nearby. The policemen’s batons are a little muted, but the men grow more agitated. They run about everywhere, barricading the pavements and extending the restricted area. Meanwhile the man clings to the end of the hand at the top of the clock like a gecko.

For years on the site of this clock stood a verdigrised statue of Bourguiba on a horse, with one of its forelegs raised to the faces of those who looked up. It was said that it raised its hoof in the face of Ibn Khaldun, whose statue had been planted like a bad dream opposite Bourguiba – and at his request. After he was swept away by order of the present rider, the statue was removed and there sprouted in its place a giant clock-tower with a cold cement pedestal. It was not long before it gave seed to smaller versions that were planted in each town and village, while statues of the Leader were banished from every part of the land.

The clock was changed for another that came from Switzerland or England or America – there were conflicting reports about the nationality of the new clock – and a bronze plinth was decorated in arabesque style. Groundless talk without proof about the clock of unknown origin was installed in the heart of the city that was heedless of its sons. No trace was left of the Leader whose statue was moved to La Goulette to gaze at the bitter sea.

Spiderman remains above the restricted zone, supporting himself with the leather belt from which he hangs as he swings about, like a professional mountaineer. Below, the world, bewildered. The crowds grow after workers leave their offices. One whole hour passes by and the police are chewing their sticks, unable to persuade the man of the hour to come down. Among the crowd strange things are going on. Thieves and pickpockets are busy stealing mobile phones and necklaces from the women onlookers; hands grope startled breasts or oblivious bums.

Climbing to the top of the clock is a serious crime, an unpardonable sin.  What is happening today undermines security. The police are facing a dilemma: how can they get on top of the situation when the scandal is unfolding in front of everybody – citizens and foreigners, and the whole country at the height of the tourist season too?

An officer almost bites the head off one helpless policeman, asking him for the thousandth time, “How did that dirty son a of a bitch get up there? Where were you, stupid idiots? How did you let him get near the clock and let him climb up as well?”

Elsewhere a policeman pounces on a tourist and snatches the camera that he was pointing at the clock. The policeman rips out the battery and nervously hands back the camera, cautioning him against using it again. The barricaded area is a restricted security zone.

The crowds start to mutter about the behaviour of the police as they clear a large space between the people and the location of the incident. Their grievance becomes louder when they see the man on the clock waving his hand and addressing the chief of the rapid intervention forces. As he is waving the empty water-bottle about, they understand he is asking for water. Another bottle is brought. A policeman scales the clocktower’s inner stairway. He throws the man the end of the rope tied round the bottle. The man grabs it and, after the policeman tries to open negotiations, orders him to go back down.

Nothing of his conversation with the policeman is heard. People are busy listening to the ravings of one young man who is shouting, “They’re showing what’s happening on television and you can hear what the guy is saying. Look, I’ve had a text message giving the news and the frequency of the channel.”

People take out their phones. The message reached everybody at the same time. The policemen get more het up and frenziedly start to look for something or other. Another group of policemen come and busy themselves searching buildings all around for the source of transmission and for the camera that is filming the incident.

Some people rush home but crowds remain and others arrive until the pavements and streets are packed to overflowing.

The translation appeared in “Emerging Arab Voices: Nadwa I”, Edited by Peter Clark, Dar al-Saqi in collaboration with IPAF, 2010.