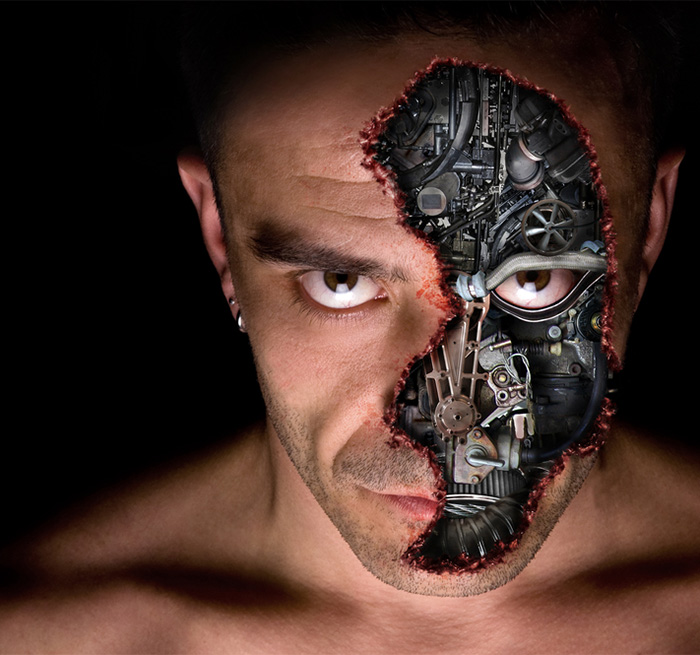 Citizen Jabir Sabeel awoke to the alarm of his Nokia mobile phone at exactly 6:05. He tried, like every morning, to cover his face with a pillow, but he felt an awful weakness. He could not move. The ringing of the alarm hammered and hammered louder and louder in his head. Eventually, he decided to reach over to the bedside table and silence the alarm; then he would give his heartbeat a few minutes to settle down before getting up. But he felt debilitated again. He had no sensation in his hand, in both hands, in his head, his legs, his whole body.

Citizen Jabir Sabeel had a shocking realization: he had turned into something else. He was no longer the person who had fallen asleep late the previous night, physically exhausted after a long evening at work. As he mentally gauged his rigidity, he became certain that he had metamorphosized into something metallic. Something stiff and hard lay in his place on the bed.

Citizen Jabir Sabeel spent some considerable time trying to get used to the hard, stiff body that had replaced his body of flesh. He then became aware of the voices of children racing through the streets on their way to school and the shouts of the sellers of vegetables, household items, and milk calling out their cheap goods. He had a strange feeling that the sunlight had started to seep into the room through a crack in the ceiling. In a panic, he remembered that he was very late for work at the government office and that a deduction from his wages and a rebuke from his stern boss awaited him. He made an effort to stand up quickly, but his heavy metal body failed him and pulled him back to the bed. In a panic, he thought, “I’m made of iron. I’ve turned into iron.”

Citizen Jabir Sabeel managed, after furious efforts, to fall out of the bed. In fact, he flung his whole new iron body onto the concrete floor. With the loud clang he made, he discovered that he had the equivalent of two long thin legs. He somehow willed himself to prop himself upon them, and he tottered over to the full-length mirror set in the middle of his wardrobe. He discovered something else: he had what appeared to be a single, seeing eye. Its sight was powerful and it led him with great accuracy towards the wardrobe.

He stopped for a few moments before lifting up his thin iron legs and positioning himself in front of the mirror. As he looked at the reflection of his new iron self, Citizen Jabir Sabeel could not stop himself crying out in a strange voice of shock and fright that made him spin around like crazy. Bullets sprayed from a tube sticking out of his front and lodged in the walls and furniture as they flew all over the place.

Jabir Sabeel was devastated to see that his new body had turned into a machine that looked like a cross between a DShK machinegun and a four-barrelled howitzer. Its sights were telescopic, like a deadly eye; its muzzle blazed like Hell; its two sturdy supports seemed to have been made to bear death. His sense of devastation worsened when he sensed the deadly bullets continue to fly out of his blazing body in every direction. His body jumped around erratically and led him into the street, leaving a trail of death and destruction all around.