00.00
Kunfoosa the Terrible Or: How to tell the difference between harmless pets and very harmful jinn

Kunfoosa the Terrible Or: How to tell the difference between harmless pets and very harmful jinn 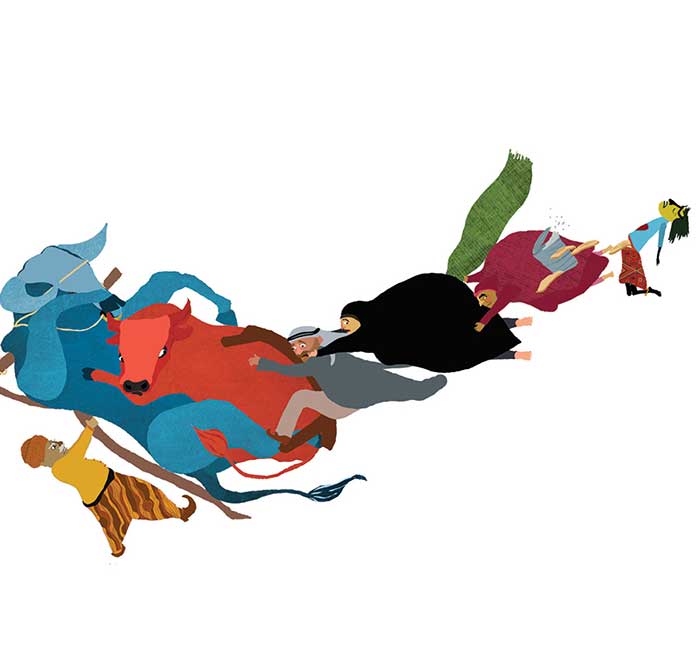 Kunfoosa the Terrible Or: How to tell the difference between harmless pets and very harmful jinn

Many years ago, before the days of highways-speed internet and underground tunnels, before natural gas drilling sites ever existed, human beings lived here side-by-side with jinn. Today it may sound strange, but back then it was well understood that just like there are human beings, each with his or her own personality, wishes and dreams, so too there are jinn.

The jinn were good and bad and temperamental, just like human beings. But an angry jinni, as you probably can imagine, is much worse than an angry person. For that reason, it was important to know how not to make a jinni angry, unless, that is, you were looking for trouble.

The primary jinn experts back then were the grandmothers (and a few grandfathers too), who knew exactly how to act around jinn. They would make a point of reminding everyone about those rules at bedtime and in the morning, and sometimes after a siesta too.

So before I begin to tell you my story, you have to know a few of those grandmothers’ important rules:

2. Many jinn share their name with an animal. For example, you could meet a girl jinni whose first name is Goat, just like a girl in your class could be Noa.

That’s about it. Now you know everything you need to know to read this story.

A long time ago but right here, in this exact spot, lived a peasant woman who had only one wish – to give birth to a daughter. But, as fate would have it, or as Allah (or no one in particular) decided, she did not give birth to a daughter, or a son, or anything at all. Day after day, she would sit at her doorstep to watch the sun set and pray for a daughter. One evening, as she sat and watched the round glowing sun sink behind the mountains, she noticed a tiny black beetle crawling by her foot. “Oh Allah,” thought the woman sadly. “I want a little girl so badly! I would be happy even if my little girl was a black beetle. I would love her as if she was a regular girl.” That is what the woman thought as she cried out, “Oh, dear Allah! Bless me with a Kunfoosa!”

But as you may have already guessed, the woman was so overcome with emotion, she forgot what her grandmother had taught her, and did not point at the beetle, whose name too was “Kunfoosa.” And so, instead of reaching the heavens, her prayer actually landed on the ears of a horrible jinni who was hiding nearby. The jinni (You’re right: Her name was Kunfoosa…) smiled an evil smile: “This woman really wants me to come stay with her. Little does she know how much trouble I’ll bring with me,” thought the jinni and immediately turned herself into a cute black beetle and hurried off to hide inside the woman’s abaya.

Night fell, and the woman got ready for bed. Suddenly, she felt a tickle going up and down underneath her abaya. She broke into a fit of laughter. “What’s wrong with you, woman?” asked her husband. “You’re acting as if you’re being possessed by a jinni!” But the woman couldn’t answer. She felt tickled all over, and could only twist and jump until a little beetle popped out of her cloak and gave her a big smile. The woman couldn’t believe her eyes. A smiling beetle! “Praised be Allah,” said the woman in amazement. “This is my Kunfoosa, the daughter I’ve been praying for every night has finally come to me.”

One day, Kunfoosa decided that she’d been a good girl long enough and it was time to turn back into a jinni. “Mama,” she said in a sweet voice. “What’s this dough you’re kneading for?” “Pita for your father’s breakfast,” her mother answered. “Soon you can eat one and take the rest to him, out in the field, with a jar of labaneh. “I don’t feel like waiting,” the jinni whined. “I want to eat the pitas right now!” The woman looked at her with a smile and said, “Sweetie, you can be patient and wait, or you can eat me up in the meantime. It’s your choice.” “An excellent idea!” cried the jinni and before the woman realized what was happening, the jinni swallowed her up in one big gulp without thinking twice, and then gobbled up the dough, the rolling pin, and the table.

“Now that’s much better,” thought the horrible jinni, feeling content. But ten years of hunger is not something to be dismissed so quickly and so she left the house and walked out to the field. “Kunfoosa, what are you doing here? Where is my breakfast?” asked her step-father, who had been plowing the field all morning. “I ate it,” answered the jinni with a smile. “And now I am going to eat you, too!” The man assumed she was joking and answered with a smile, “Okay, my dear. You can eat me up right now if that’s what you want. “ And in a blink of an eye, without thinking twice, the jinni gobbled up the man and also swallowed his plow on its two oxen.

“Now I will go and check on Grandma,” she thought as she burped.

At that moment, Kunfoosa’s step-grandmother was home, weaving a carpet. She was very happy to see Kunfoosa, who never came to visit just by herself. “Kunfoosa, honey, did you come to visit your grandmamma? “No. I came to eat you!” But her grandmother did not hear very well and so she asked, “What did you say, sweetie? That you want to eat me?” Instead of responding, the horrible jinni opened up her mouth and moved closer. “Kunfoosa!” exclaimed Grandmamma. “What a big mouth you have!” but she did not have time to ask anything else because the jinni swallowed her up in a blink of an eye, without thinking twice, in one big gulp, and then ran away.

With a full stomach, Kunfoosa roamed around the stalls of the marketplace, trying to decide what she wanted for dessert. The scents that floated in the air were all so tempting. She debated between baklava dripping with honey, tart pomegranate juice, or white, anise flavored ice cream. Suddenly a delicious scent reached her nose and she hurried to follow it to its source. “How are you today, sweetheart?” asked the old merchant when he saw Kunfoosa approaching his kanafeh stall. “I am hungry,” answered the horrible jinni, her eyes automatically drawn to the flaky orange pastry. The old merchant, who had already met a jinni or two in his lifetime, easily recognized that this was not a little girl but rather, a horrible jinni in disguise. “Can I offer you some kanafeh?” he asked slowly, silently pulling out the sharp dagger hidden in the tarbush he wore on his head. But Kunfoosa did not notice the curved blade moving towards her and staring at the kanafeh she only chanted with an eerie voice, “First I will eat you and then I will eat all your kanafeh.”

“You want to eat me?” asked the old man. “Come over here and eat me, if you dare.” Kunfoosa opened up her enormous mouth, but one second before she could close it on his head, the old man thrust the dagger into her throat and sliced her body in two.

And then, something wonderful happened: Out of the little stomach of the girl-beetle-horrible jinni popped, healthy and in one piece, as if they had never been eaten up in the first place, the woman and her husband, the table and the rolling pin, the pita dough and jar of labaneh, Grandmamma and the green carpet, the two oxen and the plow. The entire marketplace filled with joy and everyone around lifted the old wise man up high, and cheered and held a big Hafla celebration among the merchants’ stalls.

Darab on the River

The story is now added to your reading wish list. All the stories you want to read are waiting for you in your new personal area
try it
10
Shoham Smith