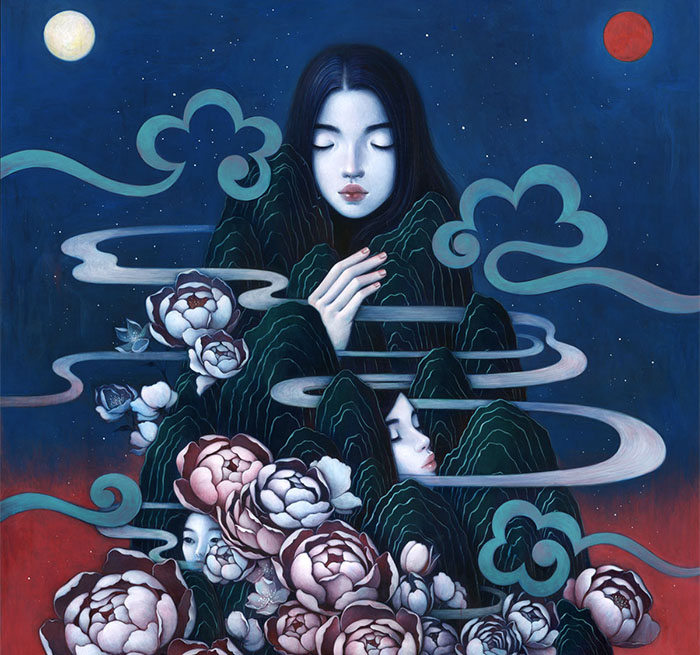 During the early years of the Ming Dynasty, one young woman in particular was praised for her beauty. Of course there were other beauties, but wherever Liling went, admirers clapped, as if she were on stage rather than in her own life, or they bowed— and sometimes they did both—for they were captivated by her coiffed hair, her straight, small shoulders, her perfect, blushing skin, and her hands—so exquisite, so delicate, able to express everything in the most minuscule gesture. Liling leant on silken pillows embroidered with all the colors of the rainbow.

But she could not walk. At least not very far. Her feet had been bound at birth and now the deformed stubs at the ends of her legs could barely support her. Slaves bore her where she wanted to go, the poles of the litter supported on their shoulders, which in warm weather were oiled to glisten. In that case she would drape silk scarves over her face to prevent the sun from damaging her skin.

Liling was happy, but, she thought, she would be so much happier if she could walk without always being about to tip over. She longed to explore the city on her own. She wanted to dance, if only for an hour. Her younger brother told her of his adventures in the city. How he ran and jumped and leapt over obstacles. How he climbed stairs and played games with his friends.

One day Little Brother came home wet. His hair was wet, there were drops of water on his hanfu. His feet were wet, his black cotton shoes soaked. “Where have you been, Little Brother?” Her voice was sweet, lulling, as it always was.

“I’m learning,” her brother said. “At school. At school I am learning to swim.”

“At school? I thought you were studying letters and numbers at school.”

“I am. But there is also swimming. We swim in the pool at school.”

When her mother and father called Liling and Changming to dinner, she made up her mind.

Her father’s eyebrows went up. As if each were a little springbox or a rolled scroll.

“Females do not swim,” he said, and his voice was low, as if he didn’t want anyone to hear it. Maybe he thought a servant would overhear.

Liling adopted her calmest manner but she did not lower her voice from its natural range.

“Females have no need to swim,” her father countered.

Her father laid down his chopsticks and propped his chin on his hands. The rice in the centered bowl was still steaming. He brought his teacup to his mouth and sipped. At last he spoke. “What is this need?” he asked. “Have we not provided you with everything you need?”

“No, Papa,” she said, not so much stubbornly as assuredly. “You see, my Lotus shoes”—by which she meant her deformed feet—“prevent me from learning about the world. And I am desirous of learning the world.”

“Desirous,” Papa said. “Perhaps you mistake the world for a husband. You will find a husband.”

Mama and Little Brother were as still as statues as this conversation continued. They were afraid Papa might stomp out of the room or lash out at Liling for her unconscionable request. Did she think she was above the rules? She was her father’s favorite, yes, but he had to conform too. He too was bound—to convention.

“Must?” her father said.

“I am telling you the truth, Papa. You must take my word for it.”

“Must and must again.”

“Your need is strong.”

She looked straight into his eyes and did not flinch.

“So be it,” he said, whereupon Mama, Little Brother, and even Liling relaxed their shoulders and sighed with relief.

The first time she dipped her foot in water she thought the water was like silk that moved of its own volition. It seemed as if a silk scarf were draped over her foot. She sat on the edge of the pool, that one foot—the right foot—dangling in water, and not until she became accustomed to the sensation did she lower her left foot. The water seemed to be cool and warm at the same time. Her brother demonstrated dog paddling, and then her father taught her to float.

She closed her eyes and she was floating on air. When she opened them again, she almost went under, but her father held her up with his strong arms and hands. Changming taught her the breast stroke. After she learned them, she practiced the breast stroke, the backstroke, the butterfly each day. It did not happen overnight, but eventually she had the hang of it. Now she felt as if she were crossing miles, though it was only the length of the pool. Freedom, she thought. I now know what freedom is.

Her small shoulders strengthened. She thought she might grow wings, because swimming was a kind of flying.

Did Liling drown? Her family may have thought so, but no, she did not drown. She swam the Yangzi. She swam the Nile. She swam the Mississippi and the St. Lawrence. She swam the Panama Canal and the English Channel. The Volga. The Dnieper. The Rhine. The Baltic Sea and the Vistula and the Seine. The Po and the Tiber. The Zambezi. She swam so far and so much that in time she forgot the names of some of the places she’d visited.

She skipped the Amazon. She had no wish to be nibbled to death by piranhas.

She never returned. She did not want a husband. She wanted to see the world.

Her parents missed her. Papa scolded himself for letting her learn to swim. Mama scolded Papa for letting Liling learn to swim. Little Brother would inherit all their earthly riches, which he would have gladly given up if only Liling came back. He missed his sister! Indeed, he missed her so much that he never again wanted to swim, not even in a pool. He thought it was his fault that she had gone away, and he’d been so proud of his big sister, her beauty, her intelligence. Her power, because he had felt that. Her power. Her strength. But he also thought: She must never have loved us. Any of us.

Licensed from Press53, LLC. Copyright 2018 by Temporium by Kelly Cherry.