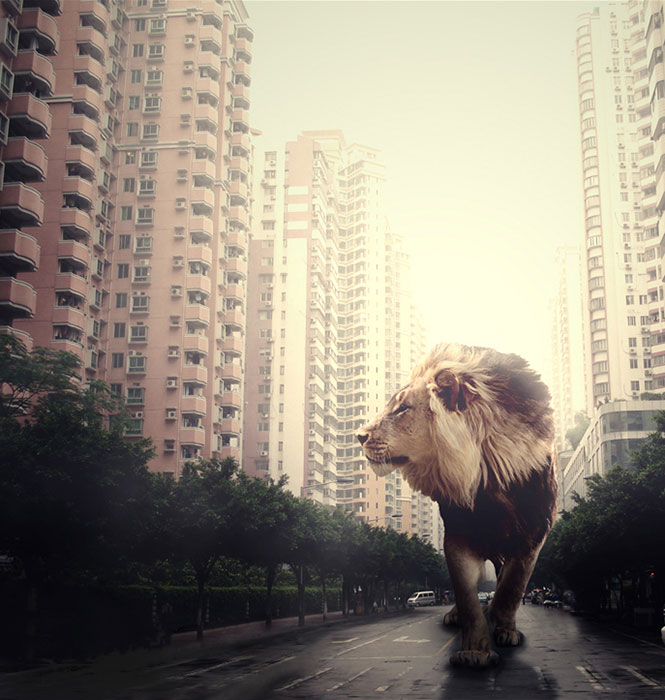 At some point in history, men and lions knew how to live together in harmony. Take for example the five felines who achieved fame thanks to the Hollywood production company that hired them over the years for the logo at the beginning of their films. Some of them were even directed by Alfred Hitchcock. Bef proposes an alternative history where this link has been broken: the kings of the jungle are now the pests of the city, a plague that must be eradicated. Bef suggests that fear is difficult but not impossible to extinguish; this is our true challenge. A roar that grows louder at our door signals the start of the battle.

These days we flee, hiding in dark corners, shying away from daylight. But things weren’t always like this. There was a time when they were just pests.

The lions first began to appear in public parks, moving under cover of darkness, hiding in the thick undergrowth, where the grass grew tall enough to hide them.

But as they ran away from us, they began to realize that we were responsible for their loss of habitat, that it was us who had taken them into a captivity that they soon outgrew.

At first we noticed a sudden decrease in the number of stray dogs in the city. Soon their gnawed bones began to pile up near the public gardens. But as usual, we didn’t pay attention until it was too late.

If it had been an endangered species like gorillas, panda bears or manatees, our zoos would almost certainly have made more effort to keep them locked up. But they had a surplus of lions.

And so they started letting them out onto the streets.

It went like this: the city zoos were ordered to get rid of excess lions. There was no point in keeping so many specimens of such a common species of little interest to visitors.

Dozens of big cats were sacrificed to keep budgets from spiraling out of control.

This policy was soon abandoned: it was too hard to kill such a large predator. It almost cost as much as keeping them, and the Sanitation Department protested vehemently. Its workers refused to handle the corpses, and the bums hated the taste of lion meat.

But orders must be followed. This was how the first lions ended up padding the streets. They were secretly shipped out in the middle of the night to the public parks, where their droppings wouldn’t be so noticeable.  No-one knows quite how many were abandoned like that. The official files were destroyed when the scandal broke. But the sensationalist figures put out by the media are undermined by more conservative estimates.

The real issue is the high fertility rate of lions. A virile adult male can copulate up to a hundred times in a single day.

A hundred copulations and a hundred ejaculations. Quite a few were likely to hit the mark, and then there was the lack of natural predators.

Although we don’t know which parks they were originally released into, we now know that at night they were migrating to every green area they could find, gradually occupying every inch of available space.

We didn’t notice the presence of our new neighbors until much later. Morning joggers, the elderly unemployed, children, young couples, and drug dealers, everyone who frequented public parks, was observed by attentive amber eyes whose owners kept out of sight in the shadows cast by the trees.

The big cats changed their habits, becoming nocturnal creatures. Their diet consisted chiefly of dogs and rats; they weren’t particularly tasty, but they were never in short supply.

If it weren’t for their eye-catching droppings, there would have been no sign at all that something unusual was going on.

Until the famous incident with the lovers.

An unnamed young couple snuck into one of the biggest parks in the city, looking for cheaper intimacy among the trees than they could find in a hotel.

It seems that they were so engrossed in their lovemaking that they didn’t notice the policeman quietly sneaking up to collar them. The officer’s gambit was thwarted by a two-hundred and fifty pound lioness that emerged from the shadows before he could blow his whistle. The terrified lovers fled, still in a state of undress.

The next day, the policeman’s remains and the lovers’ clothes were found in a pool of blood.

The forensic experts who came to investigate the crime scene soon reached the conclusion that this was an ordinary workplace accident. A couple of days later, in a different park, the body of a drunk was found torn to pieces. The following day a retired postal worker was mauled: his legs chewed off during his afternoon nap.

This marked the beginning of the attacks. The authorities would almost certainly have acted more decisively if it hadn’t been for the fact that on the fourth day a chewed up body was found whose surviving fingerprints matched those of a famous serial killer. On this occasion the boys at the station decided that it had been a suicide, attributing the previous deaths to the defunct murderer. Then the case was closed.

And so, perhaps emboldened by official indifference, the lions left their hiding places and started to brazenly shake their manes in the street.

When they’re not hungry, they’re as tame as pussy cats. But they eat all the time, so you can never tell when they’re getting ready to bite off the arm of a balloon salesman or snap up a kid.

And don’t even mention their shit.

We tried to complain, we organized neighborhood committees to demand the immediate elimination of the big cats. But our protests fell on deaf ears. The authorities believed that it was more practical – and economical – to avoid public parks and cross the street if you saw a lion coming your way. The media covered the story for a while, but the lions were soon overshadowed by the World Cup and the minor victories of the national team.

And they might never have been mentioned again if it hadn’t been for the incident in which a group of fans celebrating a tie with Bolivia was attacked by a pride of lions at the Angel of Independence monument.

The lions didn’t hang around to hear what the government and opposition had to say, or to watch the TV debates or read the editorials in the newspapers.

They were busy settling into their new habitat. Soon they were occupying the larger traffic islands.

Crossing the street had become a dangerous activity. The mayor’s advisers, who were more concerned with his run for the presidency than fixing the problem, opted for the ineffective short term solution of declaring the entire city to be an ecological lion reserve, arguing that it would keep the population in check and provide another tourist attraction for the surrounding area.

By now, the felines were occupying every green area they came across. Soon, private homes, schools, sports facilities and cemeteries were invaded by the city’s new proprietors.

You’d wake up in the morning and find that a pride of lions had moved into the yard. It didn’t seem to matter how large it was. Those living in the adjoining house were generally devoured.

Bones bigger than those of dogs and rats began to litter the streets, often with shreds of meat still attached. Soon swarms of flies became an ordinary part of the urban landscape.

Rumors started to spread: they hunted in packs, they were intelligent, they were taking over the city, there was no way to control them. The authorities denied everything, dismissing media reports as alarmist and calling on the public to tolerate their new neighbors.

Then, one day, a child’s body appeared.

Just like that, it turned up at dawn in the middle of the Zócalo, at the foot of the flagpole. It represented an official provocation.

The mayor’s advisors decided that if he ever wanted to sit in the presidential office, he’d have to declare all out war on the lions. And he did.

But it was too late. None of the resulting plans was capable of holding back the plague. Police, firefighters and army personnel were powerless against the thousands of big cats living on the streets.

One day, a lion strode to the center of the Zócalo and disdainfully spat out a human head. It turned out to belong to the mayor. A pride had taken him during an official ceremony in Alameda Central Park. The lions had been careful to make sure that it was still recognizable, if just barely.

Then the lion roared. It was as though it was proclaiming victory. There was no need; by now they owned the streets, the parks, the gardens, everything.

Every day there are more of them and fewer of us. We have to slink around in the shadows and go out at night, while they’re asleep, now that they’re diurnal again.  We hide in the dark, hoping to scavenge scraps of food from what they leave behind.

Sometimes the lions organize hunting parties to wipe us out. They can sniff out our hiding places. Sometimes we manage to get away, sometimes we don’t.

But whenever they catch one human being, another takes their place. When they are taken, another comes to replace them.

We have decided to retake our city, even if that’s the only way. Now, we’re their pests.

The translation was revised by Kit Maude.

The story is now added to your reading wish list. All the stories you want to read are waiting for you in your new personal area
try it
11
Leonid Andreyev