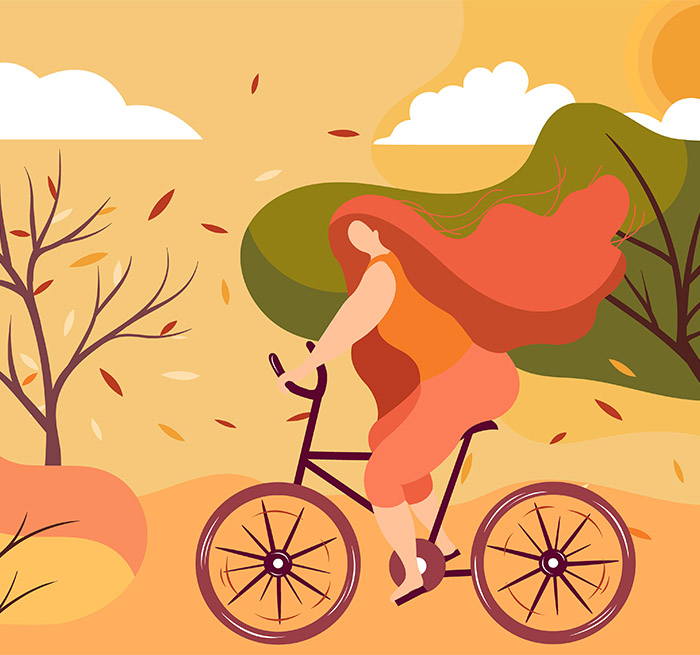 When Suzanne came back from Switzerland, she’d left three-quarters of her body weight behind.  That wasn’t her only loss, however, or the most significant. And I don’t think she’d object if I told you that losing her husband as soon as she got back wasn’t her greatest loss either.

I’d been working mornings as a waiter in a cheap café. When my shift was over, I’d switch to being a customer and enjoy the service until fairly late, and then ride my bicycle back to my humble room. One night I crossed the street not far from a thin girl. As soon as she saw me, she started screaming as if she’d seen a ghost.

Flustered, I fell off the bike, which rolled into the middle of the main street. Meanwhile, the girl started laughing hysterically. Then suddenly she calmed down and said, “Sorry, I’ll make it up to you! Here’s a hundred dollars. But don’t buy a bicycle with it!”

“You wouldn’t want to hear the story.”

“That’s all right. Besides, that’ll keep another bicycle from getting in your way.”

I bought a cup of hot coffee from the last street vendor, and Suzanne started telling her story.

“It was a month ago in Lucerne, Switzerland. I got off the bus, happy to have the long ride over with, since my butt was killing me from being squished into the narrow seat all that time.”

“But you’re so skinny,” I interrupted.

“Let me finish the story,” she said. “There’s a group of chalets at the edge of Lake Lucerne that I’d been wanting to visit. I wanted to go there to meet a Frenchman that I’d heard had a phenomenal ability to help people lose weight.”

“But you’re so skinny,” I interrupted her again.

“Let me finish the story, damn it! The village can be reached by boat, or by crossing a bridge. But the bridge had been under repair for years, and getting there by boat wasn’t an option for a big fat girl like me.”

Glaring at me with an unspoken warning not to interrupt her again, she continued, “I decided to get there through a narrow tunnel that had been used in the past by wine-transport wagons. And since it was really late, I decided to rent a bicycle. I saw a guy wearing a tall green fur cap and riding a red mountain bike. Getting straight to the point, I asked him if I could rent it.

“But you’re skinny as a rail!” I interrupted again.

“You can go to hell,” she snapped. “Just let me finish my story! . . . So I handed the guy 200 bucks. He took it and thanked me. Before leaving, he said, ‘Don’t use the tunnel road. Don’t even think about it. Better wait till morning, or go around the lake.’ But I didn’t pay any attention to him. I got on the bike and headed straight for the tunnel, which was only half-a-kilometer long. Within minutes I’d nearly come out the other end. But just as I was exiting, I noticed something weird. I was exerting a huge effort, and the wheels of the bicycle were turning, but I wasn’t getting anywhere. The road surface was moving, but the bicycle was at a standstill. Before long I realized that it was like riding on a treadmill!”

“I tried, but whenever I quit pedaling, the bike would start sinking into the asphalt, so I had no choice but to keep going. Exhaustion was killing me. Meanwhile, the street kept moving, and when it was almost sunrise, I thought I was going to die. People I knew would pop out of the darkness and wave at me, saying, ‘Hi, Suzanne!’ Then the moving asphalt would take them away like a conveyor belt, and others would appear, and so on it went.”

“It went on for hours. Then all of a sudden, the bicycle started moving—I don’t know why. Maybe the giant machine that had been moving the roadway stopped. In any case, when I came out of the tunnel, I’d lost two-thirds of my weight, and I looked like a little girl wearing her grandmother’s clothes.”

“What kind of a machine was that?”

“I don’t know. And who’s to say there actually was a machine? I’m just trying to imagine what happened. But that damned bicycle haunts me in my dreams every night, and I run away from it in my sleep.”

A shiver went through me as I said goodbye to Suzanne. I turned and cast a momentary glance at my wreck of a bike, and when I looked back in her direction, she’d vanished into thin air.

I never met up with that shadow-puppet of a girl again, and I don’t ride bicycles anymore. As for jesters in green hats, I never liked them, even before I heard this story.