Make Me Do Things 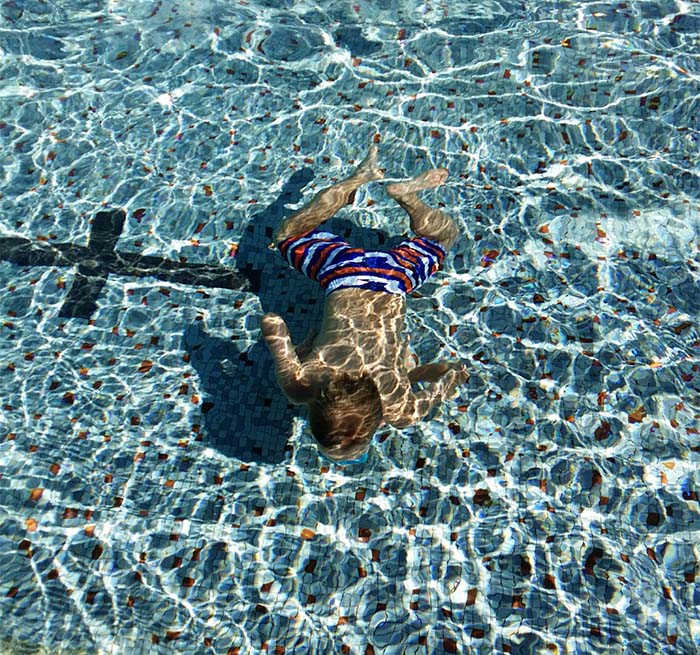 Make Me Do Things

“Try that I can’t swim,” he’d said to his mother as she bobbed

“Well, palley-walley, it’s you who’s making the big mistake,” she said before she rolled over and spread out her arms.

He could see them in their sprawl, Dan Dog’s legs sunk down

in the water, the straps of his mother’s swimsuit in a drifty signature around her.

When he saw the man lift his face up, he shouted, “Hey Dan Dog, fetch this.” The man took a closed-eyed breath and lay his billowed face back down in the water.

The boy stood on the pool steps and opened his arms. He wore wings, blown-up, electric-orange wings, bunched on his arms.

He leaped. He bounced on his tiptoes till he came to the place where the bottom sloped steeply. It had a pull, he could feel it, the deep end, a suck that the boy knew wanted to get him. He doggie-paddled back to the stairs. Tucking his legs up, he kept himself down in his tuck and squatted his way up to the top step.

The man rolled on his back, his feet pointing straight up, the way the boy had seen a man float on a morning cartoon.

His mother lifted her face for air, squinching open her eyes, then she dove under in a clean pike. The boy could see her below water arranging her swimsuit and he guessed she would break surface just where she broke the surface, squeezing herself up in a rush through the man’s legs.

His mother downed the man in a swift dunk.

The boy saw a pawed hand come out of the water and pull his mother under in a quick yank. She popped up, blowing water in a snorty laugh. The man popped up beside his mother, whipping her swimsuit top in a skim on the water, and the boy heard him bark into her hair, “I’m going to get you bad.”

“Look at me, Dan Dog!” the boy shouted from the top step, where he stood making half flaps with his winged arms.

“Look, pal,” said his mother, flattening out on her back, “what did we say about that?” She sculled in place and then did a little watery arabesque, her body folding and sinking slightly. “I haven’t done all this in I don’t know how many years,” she said, coming back up, her shut face, the boy could see, cresting just on top of the water.

“If you throw a brand-new baby in water, it will swim,” said the man. “You’re making a big deal out of nothing. I mean, we’re practically fish for Christ’s sake,” he said and tossed the strappy swim top out onto the pool deck.

The mother said, “I’ve got you, really,” and pushed off against the side of the pool. “Trust me,” she said, stretching her arms out above her head. “See, the water holds you up.”

He pulled and the nylon squeaked, stuck and sticking against the boy’s wet skin before the wings came off.

They could just forget about his going in, but the boy knew they were not forgetting—the way they kept lifting their faces, calling to him to join them in the dead man’s float. He would—no matter what they said to him—just not go in.

The boy was out again, doing his tiptoed best.

Whatever they said, his mother and the man, Dan Dog, the boy could feel the drain’s pull. Even back here, on the shallow steps where he’d crab walked himself over to, there was the drain’s suck, sucking him over to the deep end, where his mother hung on Dan Dog’s back while Dan Dog did pull-ups on the diving board.

Really, it was proof, wasn’t it? His furred neck, and the way he shook himself off, water spraying out just like water shook from a dog, wasn’t that proof, really?

“I used to do a hundred,” the man said, yanking himself up in what looked to the boy to be a motion from the same cartoon where the big bad guy had the little woman and she was holding on for her dear, good life.

“Twenty-five, twenty-six,” the man yanked, “twenty-seven, twenty-fuck, twenty-shit, oh shit!” he said, letting go, and the boy watched the joined splash of his mother and the man and the sink and sunk shape of them still joined, over in the deep end.

“Oh, Dan Dog,” he called. “Ruff, ruff, Dan Dog.” The man was facedown in his dead man’s float. His mother was floating on her back, her hands cupped and sculling close to her side. If they were dead men and dogs in the deep end, the boy wondered what that made him over in the shallow end.

“Check this out,” he called, flapping his wingless arms. Then he dropped his arms and called out, “You know, I’m a human, too.”

“Make me do things,” said his mother.

The boy sat on the steps.

“Say anything and I’ll do it—it’ll be fun,” the mother said. She was treading water.

The mother splashed over. “You know, you’re a real pill. Come on, can we have a little fun or what? Please, just give me a thrill, just say, ‘do a crab’ or say, ‘do the bunny breaststroke.’ It will be fun, really. Okay? Please.” His mother stretched out flat on her back and did a flutter kick over to where the man floated.

The boy said, “Okay, fine, be the ocean,” but his mother had already rolled over into her dead man’s float.

It seemed to the boy that they were hardly coming up for air—Dan Dog’s back looked swollen and pink, his mother strapless and drifting slightly under—neither raising for full enough breaths and neither lift¬ing, now, very much at all.

The boy called, “I say be an octopus,” and when his mother did not stir, he said, “I’m playing. Okay, Mom, I’m playing now.”

The boy walked around the edge of the pool, his bare feet pumiced by the cement. It felt good to the boy to be over here by the deep end of the pool and safe too, looking out there back to the shallow end. He saw one wing floating, orange and puffed, by the steps. The other he could not find, till he found it shored, electric, under the man’s arm, black hair seaweeded thickly over it.

His mother floated right in front of him. He thought that if he just leaned over he could touch her; for good luck he might just give her a little touch; he might touch the clean, white stripe of skin on her back for extra good luck. He did it and she startled, roiled, rolling over with her legs kicking and her arms grabbing up, raising herself as his mother would in alarm. The boy was holding on to something hard of her.

“Oh, it’s you,” he heard her say. Then he felt the seizing under-tow and knew that about his position in the animal kingdom he had been right.

*Victoria Redel, “Make Me Do Things” from Make Me Do Things. Copyright © 2018. Used with the permission of The Permissions Company, Inc., on behalf of Four Way Books, www.fourwaybooks.org.