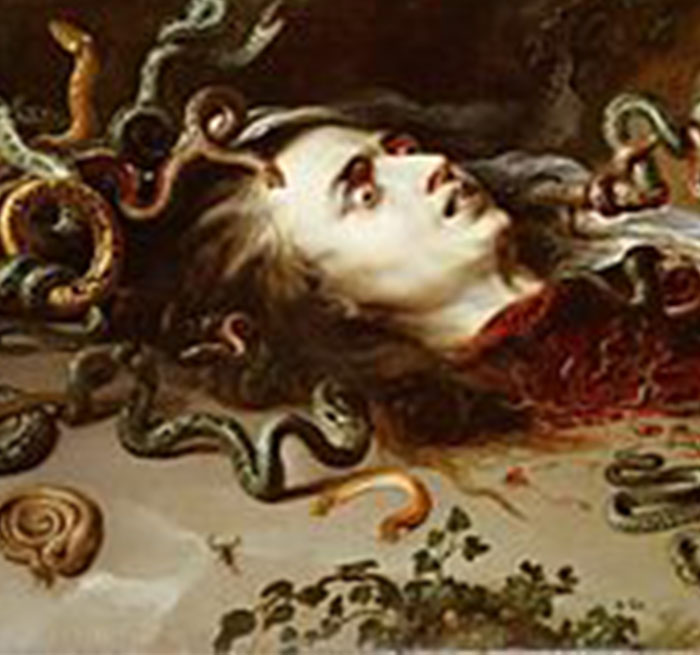 “This song’s about you.”

He leaned against the slick mahogany bar, watching a jazz trio perform Lady in Red. She glided past him and stood a few feet away, so as not to appear that she followed him in.

“It’s more purple,” she said, tugging at her dress. She bought it a year ago. Tonight, she’d finally gathered the nerve to wear it. She was never comfortable with her thighs. Or her chest. Or her rear end. The formidable dress vividly presented all of those features.

Change of subject. “I saw you at the lecture. Did you enjoy it?”

“I saw you, too.” She refocused her attention to her skirt, tugging and smoothing as if she could coax the material to grow. “The story of Medusa bothered me.”

He leaned in closer, intrigued.

“I always thought she was a monster. The snakes for hair. That twisted look on her face…” She shook her head. “She was a victim. They made her a monster—”

“–Because she was raped.”

“Because she broke a vow.”

“Depends which version you believe”

She was suddenly aware of people’s eyes on her. He wanted to be a good man. But god, that dress.

“It’s so lovely to have a real conversation with someone. And thank goodness women have more sexual liberty these days, don’t you think?”

“I think if it happened today, they’d ask what Medusa was wearing.”