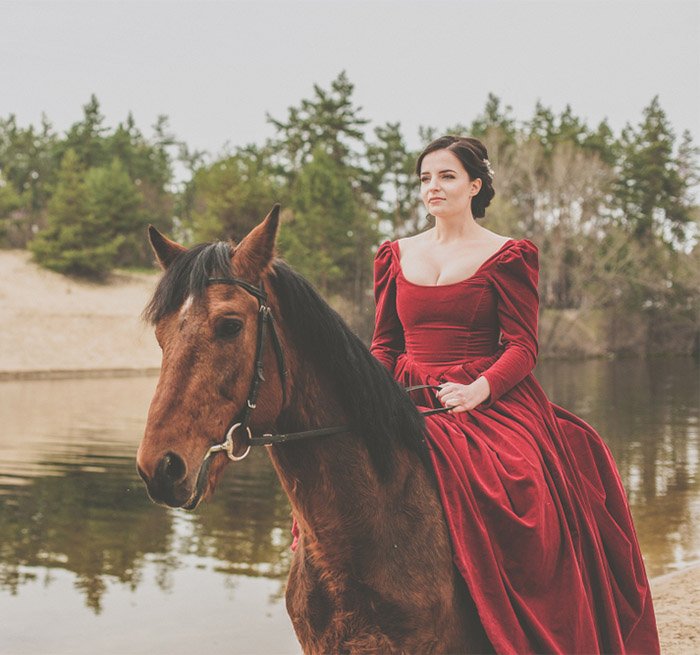 And so the beautiful Nina began to chair regular and special meetings while holding her beautiful infant. When she had to give a small speech, she handed the baby to her neighbor on the right – the “he” of our prologue — or to her neighbor on the left (on the side of her heart) — a Hungarian horse rider who might have been half as powerful as the one on the right but was, it must be said in his favor, half his age. The baby preferred this one, since the rider didn’t have a beard. But the child also loved the all-powerful man, since a certain object glittered and danced between that one’s myopic, trusting eyes, the object called a “pince-nez” in my country. The infant pinched the nose of the Commissar and tugged at the pretty curl of the Hungarian. So the clever little baby had two favorite past-times with both nannies of the male gender.

But while this was going on, what was her husband doing? Yes, there is also a husband in our story. The husband was elsewhere, at the other end of the city on the lawn in front of the former mansion of the former Counts Sollogubov, now a “Palace of Arts,” where he was writing poetry, or to be more precise — ruminating on writing poetry — at some point, when he had time, inspiration and so on, in short: on one fine day when “all this comes to an end.” But there was no end to “all this,” and he did well to be elsewhere, at the other end of the city, since the baby, occupied with the pince-nez and the curl, didn’t have an extra hand for or interest in the red beard of Nina’s husband. He, Nina’s husband, had a red beard that was endless and pointless (as all beards are pointless), a beard that he let grow as God lets the grass grow, but which — the beard — grew faster and longer than grass. And so, redder against green, flame on emerald, beard on grass: Nina’s husband dreamed. He dreamed and drank straight from the bottle.

The Revolution had broken all the glasses and the Restoration, that great Atoner and Mender, had not arrived yet, so he really did drink “straight from,” just like a baby drinks milk and just as greedily — in fact, even more greedily. Certainly the beard made him thirsty. When he noticed the bottle becoming empty, Barbarossa Red-beard (Italian)  , the true son of a Russian merchant, was troubled by the sight of its emptiness and felt remorse over the emptying he had done, and he began to whisper prayers. Which prayers? All of them. Even for the repose of the soul. If the sun was too hot, he’d go through a little door into the former family chapel of the former Counts Sollogubov, which had been turned into a Museum of Cults, whose director and sole visitor he was, and busied himself there for hours with icons and crosses of all sizes.

Toward evening Barbarossa exchanged the green carpet and baking sun for an ordinary chair and the only candle, and, sitting at the table in front of a bottle that would fill up as soon as it was empty and empty as soon as it was full, he would tell anyone who would listen to him the same story, the only story in his life: how he abducted the beautiful Nina.

“In Crimea, you know, my friend, how black the nights are. So not a drop could be seen (“glug-glug” and swallow). And the roads, you know, all lead down (the level of liquid in the bottle also went down)… of course, there are roads up, but then you find yourself on the top of the mountain, and there’s nothing there — nothing except a dreadful peak, absolutely bald, with an eagle that pecks your eyes out. So it looked like we had to choose the roads that led down, since we decided to go to… Well, now I don’t remember where. In any case, we decided to go to the place you could leave from, seeing as I abducted her. Aha! I figured that the ones that led down — see where I’m going with this? — led to the sea and the ones that went up — got it? —led into the mountains. And since we soon decided to take the ferry — you see? —we naturally needed water… but the driver was really drunk… really very drunk. The car tore off… with Nina inside… and Nina tore off since she’d abandoned her father and mother because of me (tender emotions; a long “glug-glug”). So the car sped off with Nina, who sped off inside… You wouldn’t believe how fast it went, that car! The night was black, the roads ran off in all directions, the wheels slipped, the driver was drunk, drunk as the black night!”

“You see, Nina inside… the driver – drunk. The night – black… Potholes. Gouged… the car sped… it sped…the car at top sp—(“—eed.” His mouth open on the last syllable, the storyteller fell asleep.)

Meanwhile, Nina, dressed in all her finery, like a jinn, put one hand, wide with rings,  on the hands of the all-powerful one and used her other hand to throw a red flower across the red railing of her theater loge to the Hungarian rider, who  once again basked in glory, flowers, smiles, and sweat.

The clever little baby lay deep inside the loge and slept.

Every morning we humble people, who had fetched up here in this former neighborhood of the nobility, watched raptly as Nina, like the rising sun, glided between two rows of ancient linden trees in a yellow cabriolet on two enormous wheels that turned like two suns, pulled by two horses that were also yellow.

A poet would say: Aurora in her chariot.

We all said, “Look the Commissar of the Circus.” Or “Look — the wife of Barbarossa.” Everyone, poet or not, expressed one profound thought: “Such good fortune! In these times, for one woman to have ten legs…”

We were not envious since we were Scythians — or Sarmatians — or Slavs (captives, Tatars, Barbarians) — in short, since we were Russians, we weren’t envious and were able to take pleasure from the beauty gliding past us.

(What would I, who called up this vision, do in my actual poet’s garret with two yellow horses, two wheels — also yellow — a husband with a red beard, a commissar in a pince-nez, a red-headed Hungarian rider, and who knows whose baby? No thanks. I’d change nothing. To each their own!)

And so, every morning Povarskaya Ulitsa turned into the pagan firmament and Nina became Aurora.

But also every morning, on the same street, in a lovely, large, round and very old white church dedicated to the brothers and martyr princes Boris and Gleb, an old and stubborn priest held Matins.

And also every morning the Red Army replied to the church service right there in front of the white church with a marching band.

It is a Sunday morning in sunny May. All hungry Moscow is out on the street to taste the scent of the lindens, drink in the blueness and especially – to imbibe the music, that regimental music that is always so soothing, exactly like the sight of a beautiful horse or two beautiful horses, especially yellow ones, especially driven if not by the masterful hand of the man who kept them, at least by the hand of his kept woman.

But what is happening with our two yellow horses today? Have they been lit on fire from the beard of Barbarossa? Or did the sprite of the linden trees addle their minds? Instead of stopping by the Palace of Arts next to the automobile that was already waiting for the all-powerful one to make his morning visit, they galloped to Kudrino Square, where, even more skittish, they ran around in circles, in circles around the square, not heeding Nina’s heart-rending shouts or obeying the reins in her hands, which were growing weak.

Spin ‘round, spin ‘round, wooden horses! But these horses are not made of wood, and they should run straight. But these… have they finally gone mad? They spin around like whirling dervishes, turning their necks, swinging their chestnut manes over the old cobblestones of the old square, with no mercy for the cabriolet or rider, who was standing on legs turning to wood with arms shaking spasmodically and a mane wilder than those of the horses.

This will not end well! Being the Commissar of the Circus, throwing flowers to the Hungarian rider, suckling a baby who also might be from the Hungarian — that does not make her Hungarian or a rider.

A poet from the Palace of Arts shouts: “It’s a race from hell!” An artist from the same palace pronounces: “Phaeton.” Everyone else, like people always do everywhere, watched and did nothing but comment: “It’s the end of Nina. The all-powerful one is witness to his own powerlessness… The Hungarian rider is witness to his absence…” Suddenly a shout goes up: “Barbarossa!”

Yes, Barbarossa, Red Beard, verily risen from his crypt of grass, Barbarossa in flesh and beard, running out and jumping like a kangaroo, holding an enormous silver cross. He holds it right in front of the horses’ noses, shaking it at them. They suddenly come to a halt, since they are horses and they can halt suddenly. But that is not all. They kneel down. Yes, both of them — and they do it gracefully, like people. And that is not all. They bow. They bow with dignity, like people, as the Commissar and Barbarossa take Aurora, weeping copious tears but already breaking into a smile, into their united, or rather, separate hands.

Caught up in the heat of events, or rather, by the events of the heat, I forgot to say that the end of the horses’ race coincided with the end of the music — the ceremonial and daily march from former times in the recent past when they were still just simple circus horses who did not have to pull a cabriolet with a Commissar astride.

But if in past times their bows were intended for the public, couldn’t their current bows — considering the extraordinary circumstances — be intended for God?

And since the horses kept on bowing, we applauded.