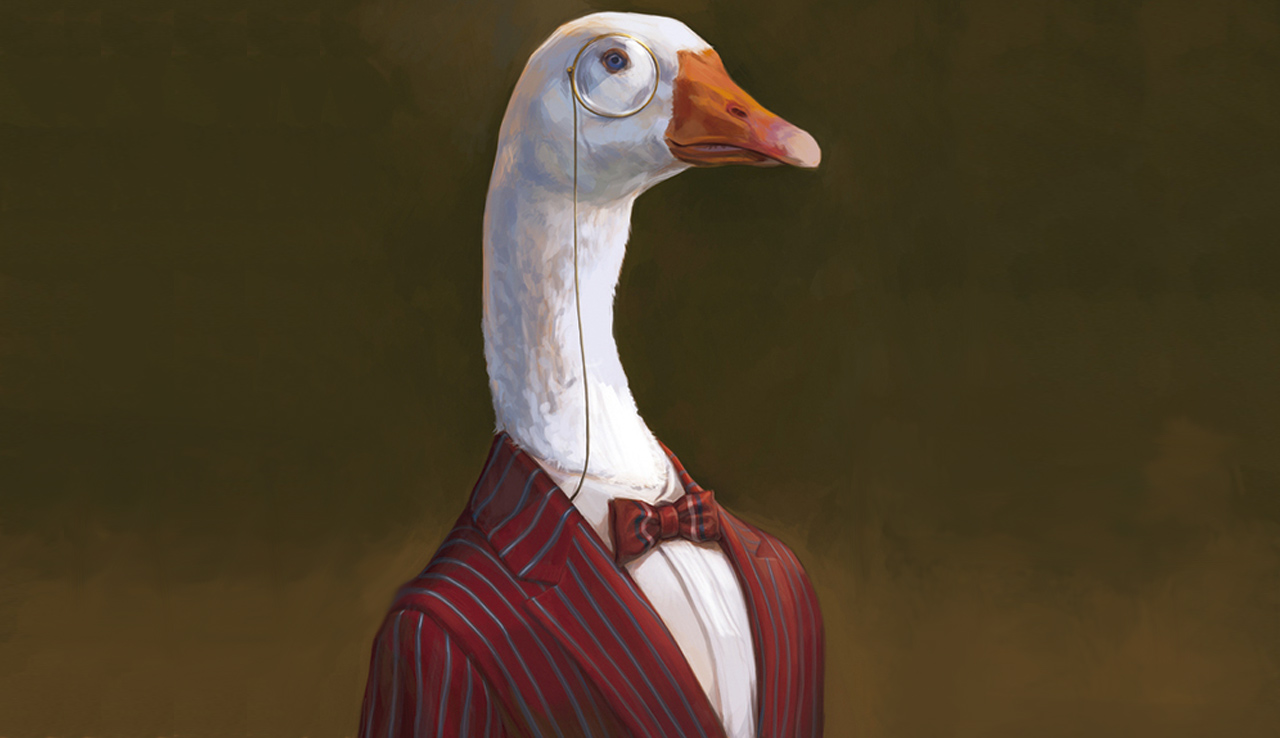 Despite being a committed reader from a very young age, I had, for a long time, only a passing interest in short-form literature. There was, I acknowledged to myself, something about it that I found unsatisfying. To read a standalone story, even a great one, felt rather like meeting a beautiful woman on the last day of a holiday, an hour before boarding the flight home. However, my attitude changed with the discovery of the Red Cavalry collection by Isaac Babel, a Russian writer of genius who was executed at the age of 45, a victim of Stalin’s purges. By the end of the first story, Crossing the River Zbrucz, I was hooked and horrified in equal measure; it had everything: style, perfect form, atmosphere, heart, etc. Yet the story I have chosen for this project is not that one, but My First Goose. I won’t recount the plot, because you can find that out for yourself by reading it. In any case, I was, and still am, most struck by the range, and intensity, of emotion; the journey the narrator goes on in such a small number of pages; the brilliant imagery; and the fact that Babel manages to convey something of the brutality of war without a single human casualty.

Savitsky, the commander of the Sixth Division, rose when he saw me, and I was taken aback by the beauty of his gigantic body. He rose — his breeches purple, his crimson cap cocked to the side, his medals pinned to his chest — splitting the hut in two like a banner splitting the sky. He smelled of perfume and the nauseating coolness of soap. His long legs looked like two girls wedged to their shoulders in riding boots.

He smiled at me, smacked the table with his whip, and picked up the order which the chief of staff had just dictated. It was an order for Ivan Chesnokov to advance to Chugunov-Dobryvodka with the regiment he had been entrusted with, and, on encountering the enemy, to proceed immediately with its destruction.

” …the destruction of which,” Savitsky began writing, filling the whole sheet, “I hold the selfsame Chesnokov completely responsible for. Noncompliance will incur the severest punitive measures, in other words I will gun him down on the spot, a fact that I am sure that you, Comrade Chesnokov, will not doubt, as it’s been quite a while now that you have worked with me on the front….”

The commander of the Sixth Division signed the order with a flourish, threw it at the orderlies, and turned his gray eyes, dancing with merriment, toward me.

I handed him the document concerning my assignment to the divisional staff.

“Yes, I can,” I answered, bristling with envy at the steel and bloom of his youth. “I graduated in law from the University of Petersburg.”

“So you’re one of those little powder puffs!” he yelled, laughing. “With spectacles on your nose! Ha, you lousy little fellow, you! They send you to us, no one even asks us if we want you here! Here you get hacked to pieces just for wearing glasses! So, you think you can live with us, huh?”

“Yes, I do,” I answered, and went to the village with the quartermaster to look for a place to stay.

The quartermaster carried my little suitcase on his shoulder. The village street lay before us, and the dying sun in the sky, round and yellow as a pumpkin, breathed its last rosy breath.

We came to a hut with garlands painted on it. The quartermaster stopped, and suddenly, smiling guiltily, said, “You see we have a thing about spectacles here, there ain’t nothing you can do! A man of high distinguishings they’ll chew up and spit out — but ruin a lady, yes, the most cleanest lady, and you’re the darling of the fighters!”

He hesitated for a moment, my suitcase still on his shoulder, came up very close to me, but suddenly lunged away in despair, rushing into the nearest courtyard. Cossacks were sitting there on bundles of hay, shaving each other.

“Fighters!” the quartermaster began, putting my suitcase on the ground. ”According to an order issued by Comrade Savitsky, you are required to accept this man to lodge among you. And no funny business, please, because this man has suffered on the fields of learning!”

The quartermaster flushed and marched off without looking back. I lifted my hand to my cap and saluted the Cossacks. A young fellow with long, flaxen hair and a wonderful Ryazan face walked up to my suitcase and threw it out into the street. Then he turned his backside toward me, and with uncommon dexterity began emitting shameless sounds.

“That was a zero-zero caliber!” an older Cossack yelled, laughing out loud. “Rapid-fire!”

The young man walked off, having exhausted the limited resources of his artistry. I went down on my hands and knees and gathered up the manuscripts and the old, tattered clothes that had fallen out of my suitcase. I took them and carried them to the other end of the yard. A large pot of boiling pork stood on some bricks in front of the hut. Smoke rose from it as distant smoke rises from the village hut of one’s childhood, mixing hunger with intense loneliness inside me. I covered my broken little suitcase with hay, turning it into a pillow, and lay down on the ground to read Lenin’s speech at the Second Congress of the Comintern,  The Third Communist International, 1919-1943, an organization founded in Moscow by the delegates of twelve countries to promote Communism worldwide.  which Pravda had printed. The sun fell on me through the jagged hills, the Cossacks kept stepping over my legs, the young fellow incessantly made fun of me, the beloved sentences struggled toward me over thorny paths, but could not reach me. I put away the newspaper and went to the mistress of the house, who was spinning yarn on the porch.

The old woman raised the dripping whites of her half-blind eyes to me and lowered them again.

“Comrade,” she said, after a short silence. “All of this makes me want to hang myself!”

“Goddammit!” I muttered in frustration, shoving her back with my hand. “I’m in no mood to start debating with you!”

And, turning around, I saw someone’s saber lying nearby. A haughty goose was waddling through the yard, placidly grooming its feathers. I caught the goose and forced it to the ground, its head cracking beneath my boot, cracking and bleeding. Its white neck lay stretched out in the dung, and the wings folded down over the slaughtered bird.

“Goddammit!” I said, poking at the goose with the saber. “Roast it for me, mistress!”

The old woman, her blindness and her spectacles flashing, picked up the bird, wrapped it in her apron, and hauled it to the kitchen.

“Comrade,” she said after a short silence. “This makes me want to hang myself.” And she pulled the door shut behind her.

In the yard the Cossacks were already sitting around their pot. They sat motionless, straight-backed like heathen priests, not once having looked at the goose.

“This fellow’ll fit in here well enough,” one of them said, winked, and scooped up some cabbage soup with his spoon.

The Cossacks began eating with the restrained grace of muzhiks who respect one another. I cleaned the saber with sand, went out of the courtyard, and came back again, feeling anguished. The moon hung over the yard like a cheap earring.

“Hey, brother!” Surovkov, the oldest of the Cossacks, suddenly said to me. “Sit with us and have some of this till your goose is ready!”

He fished an extra spoon out of his boot and handed it to me. We slurped the cabbage soup and ate the pork.

“So, what are they writing in the newspaper?” the young fellow with the flaxen hair asked me, and moved aside to make room for me.

“In the newspaper, Lenin writes,” I said, picking up my Pravda, “Lenin writes that right now there is a shortage of everything.”

And in a loud voice, like a triumphant deaf man, I read Lenin’s speech to the Cossacks.

The evening wrapped me in the soothing dampness of her twilight sheets, the evening placed her motherly palms on my burning brow.

I read, and rejoiced, waiting for the effect, rejoicing in the mysterious curve of Lenin’s straight line.

“Truth tickles all and sundry in the nose,”  A pun on “truth,” Pra·vda, which is also the name of the Russian daily that the narrator is reading to the Cossacks.   Surovkov said when I had finished. “It isn’t all that easy to wheedle it out of the pile of rubbish, but Lenin picks it up right away, like a hen pecks up a grain of corn.”

That is what Surovkov, the squadron commander, said about Lenin, and then we went to sleep in the hayloft. Six of us slept there warming each other, our legs tangled, under the holes in the roof which let in the stars.

I dreamed and saw women in my dreams, and only my heart, crimson with murder, screeched and bled.