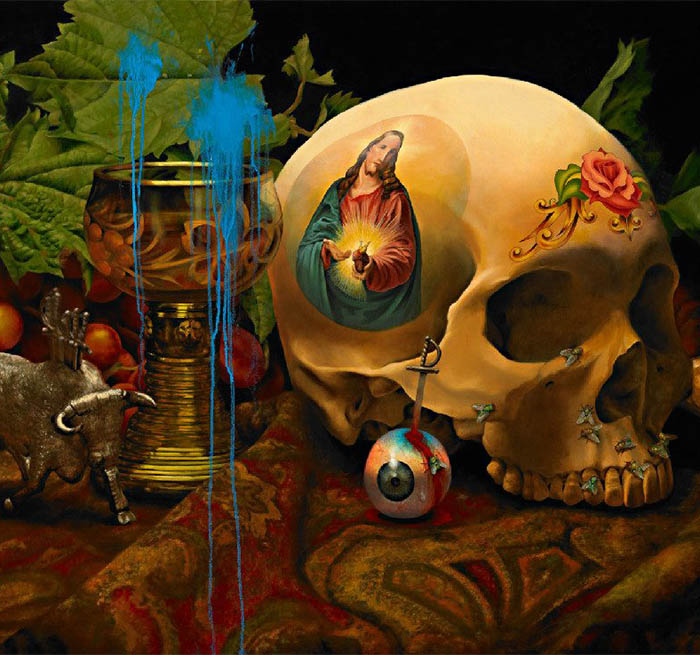 By Kamal Riahi
The French philosopher David Le Breton says that “we live, like children, in a world full of odors, which we are not necessarily aware of, but which undoubtedly affect our behavior towards others.” With this, Le Breton moves into a mysterious world that reveals how our discourse, which is overloaded with racism and hatred towards the other, stems from the moment we lose the neutrality of the smells of childhood. This is the same world that Sonallah Ibrahim, the Egyptian writer,  penetrated in his famous censored story “The Smell of It”; as well as Patrick Süskind’s protagonist Jean-Baptiste Grenouille in his novel “Perfume: The Story of a Killer”.

This is another story that bursts into this same world, in which the Palestinian writer Naji Dahir observes death closely–death as the most profound issue for humans, and yet the most rarely discussed.  Despite our sorrow as human beings, we have not yet discussed death and have not yet written about it enough.

A surreal, melancholy story that does not cease to embody the surprises that lie in the rhythms of death until its last word.

I could smell the stench of death. From the first shades of darkness, I smelt the stench of death. A stench above me, a stench below me. Wherever I turned, I smelt the same stench. A putrid smell, like the smell of burning human flesh. Little by little, it flooded my nostrils. I tried to evade it but it pursued me. I turned to the right but it came up behind. I turned to the left but it struck my nostrils all the more. Whenever I ran away, it assailed me more. Where did this hateful smell come from? Who was forcing it up my nose?

The stench became unbearable. I had to overcome it. From my earliest days, I was accustomed to facing up to fears rather than run away from them. So why could I not outface this stench? I ran into the darkened street, guided by that stench. I ran and ran and ran until the stench was right under my nose. Then I stopped. My eyes lit upon a door that was beginning to open very slowly. My eyes were unable to distinguish the surrounds of the door. All I could be sure of was that the door was opening. I went in. The stench hit me full blast. I tried to block my nose with my hands but was unable to do so. My hands were helpless, not responding to what I wanted. I looked right and left, in an attempt to get away from the stench. But it only became stronger.

There I was, listening to the smell, hissing at me, “Where will you run from me? Whatever you do, I will catch you.”

I replied, my tongue frozen in my mouth, “What have I done to you to make you pursue me so ruthlessly?” I tried to move my neck to getaway. It came on even more strongly. Its voice was not unfamiliar. It was like the voice of my ailing wife on her death bed. I wanted to make sure of something deep down. “Who are you?” I asked the voice.

“Do you really want to know?” it asked.

I tried to go back in time to the day I found a treasure that I had spent nights and nights seeking. That day I came to my wife, with darkness in my soul and the scant light of the treasure on my lips. I was wondering how I could persuade her to love me after about half a century of being together but with hatred evident, in every gesture, she flung in my face. I dropped the treasure at her feet. I told myself that now she would love me. I was giving her what she had wanted and sought ever since she was a child.

My helpless old wife clutched the treasure as if she wanted to tell me without saying the words that the treasure was no longer mine but had become her exclusive property. I did not argue. I wanted to make her love me. I was sick of hatred. I could bear it no longer.

“This is yours,” I said. “All of it.”  My wife seemed taken aback at my words. That was the first and last time that she was taken aback at anything I said. She asked me whether anyone knew about this treasure. I shook my head. I wanted to say that it all belonged to us, both of us. Fifty years of anger flashed from her eyes. I could tell from her look that she wanted the treasure all to herself. I tried to make her feel that it did belong to her and that all I asked for was that she loved me a little. She just clutched the treasure tighter and tighter. I understood that she had finally found what might make her happy even if only a little. Let it be so! But she would not want to love me even if I gave her the treasures of Korah. I knew that all the treasure in the world could not purchase the heart of a woman filled with hate. But it was something I had to try in that total darkness.

I turned round in this room that was full of the stench of death. Everything was in utter darkness. I went back to my wife and saw her clutching the treasure with an awful strength. Days and nights passed by and my wife clutched the treasure. She was cut off from the world, asking for nothing, not even food or drink. All her concerns were about clinging on to her beloved, her treasure. I felt she had found a substitute for everything that surrounded her. I realised behind time that it was I who had presented her with this substitute. I said to myself, “So be it. Half a century of hatred has gone by. And in exchange . . . trying to get closer to her and persuade her to love me. There’s no harm in keeping on trying.”

As I wandered among bats and jackals in the dark nights I always ended up stopping in the same place in front of her in the same room. The sight of her had not changed. My wife had cut herself off from the world, and my dream was limited to getting her back to it, then if I was able to bring her back to her normal life perhaps she would love me. Without much reflection I started offering her whatever was good and sweet from the fruits of the night. I piled them up before her in the hope she would take something that would nourish and strengthen her and make her carry on living. Perhaps then she would come to me that very night. Except she took nothing. I came back to her with more fruits and piled them up before her in the hope she would eat a very little. I was surprised whenever I came to her in her room and she was staring at the huge pile of food in front of her without stretching out her hand to it. I took one of the large pieces of fruit and offered it to her in the hope she was conscious of me, but she turned her face away. She stuck her tongue out in revulsion. I felt the fruit with my hand. It was a big apple. I turned away – it had gone rotten and there were maggots crawling out of it.

My wife started wasting away until I could hardly see her. If it had not been for the treasure in her grasp, perhaps it would have been impossible to see her. As she wasted away, I observed that disease was ravaging my wife. I had no alternative but to take her to the doctor but she refused. I felt she was afraid that I would take the treasure from her and keep it for myself. Perhaps it occurred to her that I might look for another woman to love me after all that overwhelming hatred that had endured to feeble old age. Still, I tried to convince her to see the doctor and to go through with an operation which I knew was risky, but that was better than sleepwalking to death. She went on refusing.

Thus we both found, she first of all and then myself — although the truth was completely the opposite, me first, then her — that we were in a dilemma. I wanted her to have an operation that might save her life, she refused so that I did not take her treasure, which earlier had been mine. Time passed hurling me from blackness to blackness. I grew tired waiting at the edge of the dark and the mist, and I surrendered to fitful sleep.

I saw my wife get up, lift the treasure, and crash it down on my head with all the strength of her weakness. She shouted at me, saying I wanted to make her have an operation to give me the chance to seize the treasure and to enjoy a happy life with one of the virgins of Paradise. She continued to bash the treasure on my head. Blood gushed until it was not long before I was like some fountain. After that my wife poured a burning substance over me. The smell of burning flesh spread from my body pervading the streets and the darkness. Meanwhile I left my own body. I saw her cast beside my corpse. I cried out, “Has my wife died?” I carried on screaming while I ran in flames through the streets… the stench of death in my wake.