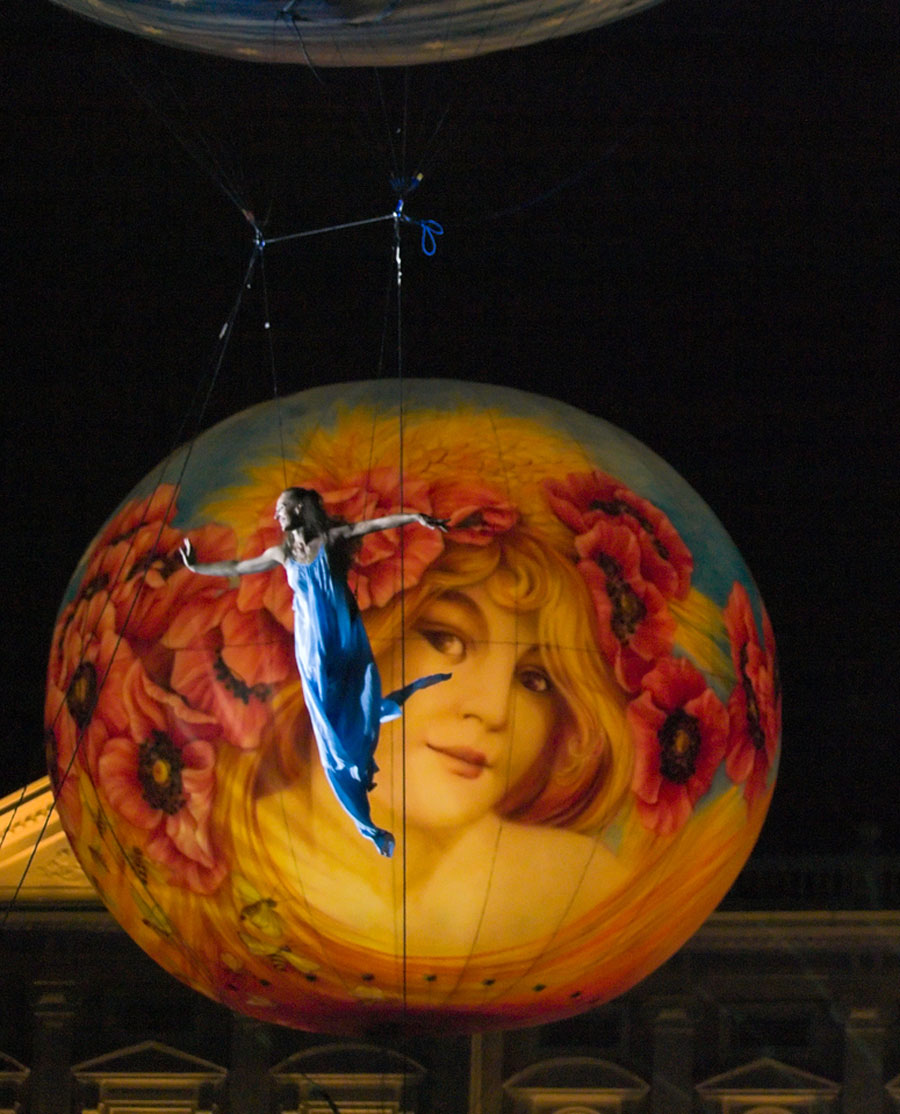 You spotted the trapeze rig in the spring, where it seemed to have sprouted, like a flower, from its otherwise concrete surroundings. It was pitched on a medium-sized plot of grass in what counts as a park in your Midwestern city, and you passed it as you drove across town to go to the new international food market for ingre­dients for a complicated Asian noodle dish. You are at an age— thirty-three—at which all of the sudden you aspire to be thought of as a foodie.

It was empty that day: There were no other hints of circus around—no jugglers, no fire-eaters, no high-wire act—and the trapeze looked lonesome there all by itself, nobody swinging into its net, nobody sitting in the half-ring of bleachers that sur­rounded it. You didn’t think about it as you and your husband ate dinner that night, your noodles fragrant with Thai basil and delicious, a rare success (except for two varieties of grilled cheese sandwich, which you do very well, you are not a good cook). But the next week when you drove by, this time with the goal of homemade sushi, there were figures swinging delicately to and fro from the contraption, and you nearly rear-ended the Toyota in front of you. You found the trapeze school on the internet, where you learned that they give performances on Friday nights and lessons on Saturdays. Experience the thrill of the flying trapeze! All levels welcome! And so that Friday you dragged your husband to the spot, half-expecting the whole thing to have vanished, like a mirage. But there it was, beautiful at night in the glow of white lights. You took note of the fact that the bleachers were half­empty in only a peripheral way, watching in awe as the aerialists tossed their lithe bodies from bar to bar. “It was okay, I guess,” said your husband, who has very specific preferences—romantic comedies with unhappy endings, partially finished basements, steak only if he doesn’t have to see it raw first—and then the two of you went out for pizza. But the next afternoon you tied your hair into a ponytail and fished out a pair of old spandex shorts and went bravely back, determined to try this thing for yourself.

You didn’t know that it would feel a little bit like sex—the bodily connection, the fitting together of parts—the small oh! you released when Isaac, the catcher, grasped you by the wrists and held you swinging through the air, an incredible three or four seconds of weightlessness until he dropped you gently to the net. You didn’t know that when the sweet, fresh-faced college student behind you in the fly order, also taking her very first lesson, cried thank you! and that was wonderful! as she landed on the net after being caught by Isaac that you would know exactly how she felt (amazed, grateful). You didn’t know that when Isaac, halfway up the ladder, turned back and said I want to catch you again that it would feel like your heart leaving your chest.

He is so beautiful you almost cannot believe it. As a girl you were used to boys who were sweaty and awkward, who you developed crushes on despite their tendency to talk too loud and too quickly, despite their outfits picked out so obviously by their mothers. They were boys whose over-long limbs seemed not a part of them; boys who touched you with clumsy sweaty fingers and then waited eagerly for their turn. At some point these boys became men who worked in marketing and knew a lot about microbrews and played kickball on weeknights, who took you out to reasonably nice restaurants before touching you with clumsy sweaty fingers and then waiting, only slightly less eager, for their turn. With his black eyes and dark curly hair, Isaac is beautiful in a nearly Biblical way: You think that he would not have looked out of place in the Garden of Eden, a banana leaf over his crotch.

You didn’t know that you’d be back the next Saturday, and the next Saturday after that. You didn’t know that you’d fake severe menstrual cramps to get out of a trip to the vineyards with friends two Saturdays later. You didn’t know that you’d take such pure and unsullied pleasure in leaping from a board two stories above ground, in learning how to get upside down, how to arch your back to look for the catch. You even like the terminology that the aerialists use, even before it makes any sense to you, those beautiful strange words: planche, whip, salto. Every action of your adult life is a measured, careful decision, even things that are supposed to be fun—what kind of fro­zen yogurt to buy, whether to go to the movies or rent one on demand—and you take an uncomplicated joy in your uncom­plicated accomplishments on the trapeze. Joy is not a word you can use to describe any other singular thing in your life. You work for a company that assesses the competency of call center agents—which agents do a good job solving customer problems, which do a poor job, and which do very subtle gradations of jobs in between. None of you, except a plumpish, forty-something woman who always declines your invitations to go for drinks, care anything whatsoever for your jobs.

You didn’t know that when you didn’t tell your husband how much you love the trapeze that this would feel like a small betrayal, and you didn’t know that you’d fall in love with Isaac the way you fell in love with Mike DeCarmo sophomore year of high school—recklessly, carelessly, with the hot spark of adolescence. You didn’t know flying on the trapeze would make you realize things about your marriage, like how you wish your husband read books, how you hate that he suspects a conspiracy in everything— even the price of ice-cream cones—how when you’re with him you turn into a sly, sneering version of yourself. You didn’t know that on the eve of your thirty-fourth birthday, one month after your first trapeze lesson, you would realize that you didn’t want children, despite the plan you and your husband meticulously plotted out, the first pregnancy at thirty-five, after you are both established in your careers, the (admittedly small) college savings already socked away. You didn’t know that when you told your husband this that he would say that’s okay and then take a pair of pruning shears to the bushes around your house until they looked small and sad and eventually one of them sort of shriveled up and died. You didn’t mean for that to happen.

You didn’t know that Isaac would like you back. That he’d notice as your old training from high school diving practice came back, more relevant than you would have guessed, muscle memory returning slowly from wherever it was stored away (forever, you thought) and push you to learn harder and harder tricks on the trapeze, back-end straddle whips and penny rolls and then layouts and double-backs, performing catches with you himself (always), lifting you by your hands your ankles your waist, the two of you a perfect match with your strong lean bodies and dark hair, like brother and sister, almost, except that the parts of your body he touches pulse white-hot for days, until finally the part of you he touches is your lips, and you think you might die, immediately and without warning, from happiness.

But you don’t die. You keep flying, every Saturday, except now Isaac meets you some weeknights, too, at the company’s indoor rig. You do catch after catch, his hands wrapped firmly around your wrists, and when you finally sleep with him (quietly and urgently, on the trapeze net) it doesn’t occur to you that this is a worse transgression than what you have already done.

You didn’t know that when the owner of the trapeze com­pany offered you a job that you would accept, that you’d leave your job, your 5 percent 401K match, your seventeen paid vaca­tion days per year, to make thirteen-fifty an hour as a junior-level aerialist at a trapeze school, that in the third decade of your life you’d start anew, having discovered pieces of you that you didn’t know existed, sparks and flashes of something presumed long dead. When you tell your husband about your decision he registers the shock quietly, mostly in his eyebrows, and does not challenge you.

On the night of your very first performance, you change into your leotard in a trailer dashed away on the edge of the patch of grass and do your own hair and makeup with the other female aerialists. When you gaze at yourself in the mirror, at your hair pulled back tightly and your eyes dark with mascara, you think that you have never looked so beautiful, not even on your wedding day. Isaac has slicked his dark hair back and when his face appears behind yours in the mirror your breath catches in your throat at his loveliness.

*Licensed from The University of North Texas Press. Copyright 2018 by Becky Adnot-Haynes from The Year of Perfect Happiness