Raggedy Ann And The Kittens 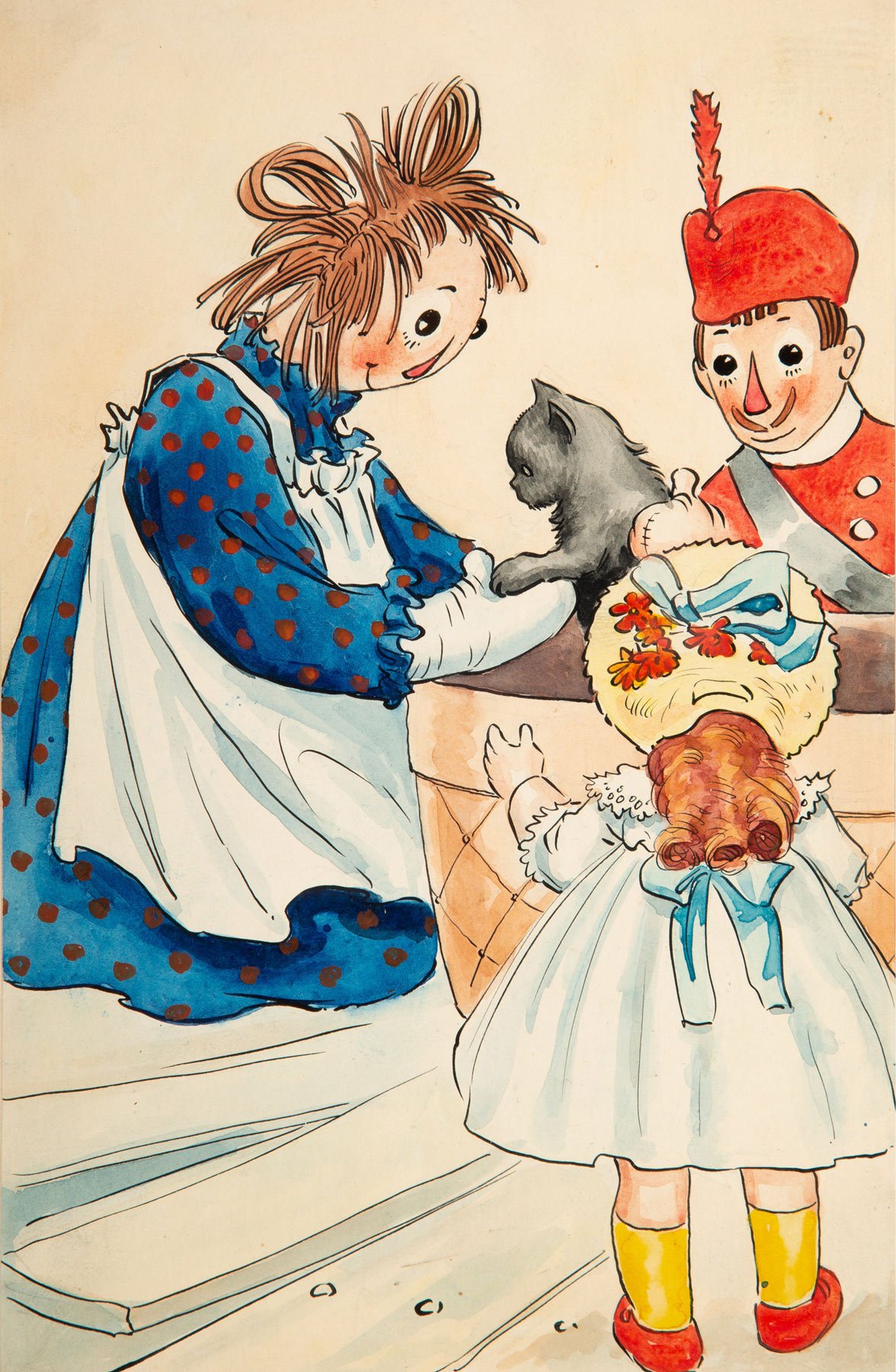 Raggedy Ann And The Kittens

Raggedy Ann had been away all day.

Marcella had come early in the morning and dressed all the dolls and placed them about the nursery.

Some of the dolls had been put in the little red chairs around the little doll table. There was nothing to eat upon the table except a turkey, a fried egg and an apple, all made of plaster of paris and painted in natural colors. The little teapot and other doll dishes were empty, but Marcella had told them to enjoy their dinner while she was away.

The French dolly had been given a seat upon the doll sofa and Uncle Clem had been placed at the piano.

Marcella picked up Raggedy Ann and carried her out of the nursery when she left, telling the dolls to “be real good children, while Mamma is away!”

When the door closed, the tin soldier winked at the Dutch-boy doll and handed the imitation turkey to the penny dolls. “Have some nice turkey?” he asked.

“No thank you!” the penny dolls said in little penny-doll, squeaky voices, “We have had all we can eat!”

“Shall I play you a tune?” asked Uncle Clem of the French doll.

At this all the dolls laughed, for Uncle Clem could not begin to play any tune. Raggedy Ann was the only doll who had ever taken lessons, and she could play Peter-Peter-Pumpkin-Eater with one hand.

In fact, Marcella had almost worn out Raggedy Ann’s right hand teaching it to her.

“Play something lively!” said the French doll, as she giggled behind her hand, so Uncle Clem began hammering the eight keys on the toy piano with all his might until a noise was heard upon the stairs.

Quick as a wink, all the dolls took the same positions in which they had been placed by Marcella, for they did not wish really truly people to know that they could move about.

But it was only Fido. He put his nose in the door and looked around.

All the dolls at the table looked steadily at the painted food, and Uncle Clem leaned upon the piano keys looking just as unconcerned as when he had been placed there.

Then Fido pushed the door open and came into the nursery wagging his tail.

He walked over to the table and sniffed, in hopes Marcella had given the dolls real food and that some would still be left.

“Where’s Raggedy Ann?” Fido asked, when he had satisfied himself that there was no food.

“Mistress took Raggedy Ann and went somewhere!” all the dolls answered in chorus.

“I’ve found something I must tell Raggedy Ann about!” said Fido, as he scratched his ear.

“Is it a secret?” asked the penny dolls.

“How lovely!” cried all the dolls, “Really live kittens?”

“Really live kittens!” replied Fido, “Three little tiny ones, out in the barn!”

“Oh, I wish Raggedy Ann was here!” cried the French doll. “She would know what to do about it!”

“That’s why I wanted to see her,” said Fido, as he thumped his tail on the floor, “I did not know there were any kittens and I went into the barn to hunt for mice and the first thing I knew Mamma Cat came bouncing right at me with her eyes looking green! I tell you I hurried out of there!”

“How did you know there were any kittens then?” asked Uncle Clem.

“I waited around the barn until Mamma Cat went up to the house and then I slipped into the barn again, for I knew there must be something inside or she would not have jumped at me that way! We are always very friendly, you know.” Fido continued. “And what was my surprise to find three tiny little kittens in an old basket, ‘way back in a dark corner!”

“Go get them, Fido, and bring them up so we can see them!” said the tin soldier.

“Not me!” said Fido, “If I had a suit of tin clothes on like you have I might do it, but you know cats can scratch very hard if they want to!”

“We will tell Raggedy when she comes in!” said the French doll, and then Fido went out to play with a neighbor dog.

So when Raggedy Ann had been returned to the nursery the dolls could hardly wait until Marcella had put on their nighties and left them for the night.

Then they told Raggedy Ann all about the kittens.

Raggedy Ann jumped from her bed and ran over to Fido’s basket; he wasn’t there.

Then Raggedy suggested that all the dolls go out to the barn and see the kittens. This they did easily, for the window was open and it was but a short jump to the ground.

They found Fido out near the barn watching a hole.

“I was afraid something might disturb them,” he said, “for Mamma Cat went away about an hour ago.”

All the dolls, with Raggedy Ann in the lead, crawled through the hole and ran to the basket.

Just as Raggedy Ann started to pick up one of the kittens there was a lot of howling and yelping and Fido came bounding through the hole with Mamma Cat behind him. When Mamma Cat caught up with Fido he would yelp.

When Fido and Mamma Cat had circled the barn two or three times Fido managed to find the hole and escape to the yard; then Mamma Cat came over to the basket and saw all the dolls.

“I’m s’prised at you, Mamma Cat!” said Raggedy Ann, “Fido has been watching your kittens for an hour while you were away. He wouldn’t hurt them for anything!”

“You must trust Fido, Mamma Cat!” said Raggedy Ann, “because he loves you and anyone who loves you can be trusted!”

“That’s so!” replied Mamma Cat. “Cats love mice, too, and I wish the mice trusted us more!”

The dolls all laughed at this joke.

“Have you told the folks up at the house about your dear little kittens?” Raggedy Ann asked.

“Oh, my, no!” exclaimed Mamma Cat. “At the last place I lived the people found out about my kittens and do you know, all the kittens disappeared! I intend keeping this a secret!”

“But all the folks at this house are very kindly people and would dearly love your kittens!” cried all the dolls.

“Let’s take them right up to the nursery!” said Raggedy Ann, “And Mistress can find them there in the morning!”

“How lovely!” said all the dolls in chorus. “Do, Mamma Cat! Raggedy Ann knows, for she is stuffed with nice clean white cotton and is very wise!”

So after a great deal of persuasion, Mamma Cat finally consented. Raggedy Ann took two of the kittens and carried them to the house while Mamma Cat carried the other.

Raggedy Ann wanted to give the kittens her bed, but Fido, who was anxious to prove his affection, insisted that Mamma Cat and the kittens should have his nice soft basket.

The dolls could hardly sleep that night; they were so anxious to see what Mistress would say when she found the dear little kittens in the morning.

Raggedy Ann did not sleep a wink, for she shared her bed with Fido and he kept her awake whispering to her.

In the morning when Marcella came to the nursery, the first thing she saw was the three little kittens.

She cried out in delight and carried them all down to show to Mamma and Daddy. Mamma Cat went trailing along, arching her back and purring with pride as she rubbed against all the chairs and doors.

Mamma and Daddy said the kittens could stay in the nursery and belong to Marcella, so Marcella took them back to Fido’s basket while she hunted names for them out of a fairy tale book.

Marcella finally decided upon three names; Prince Charming for the white kitty, Cinderella for the Maltese and Princess Golden for the kitty with the yellow stripes.

So that is how the three little kittens came to live in the nursery.

And it all turned out just as Raggedy Ann had said, for her head was stuffed with clean white cotton, and she could think exceedingly wise thoughts.

And Mamma Cat found out that Fido was a very good friend, too. She grew to trust him so much she would even let him help wash the kittens’ faces.