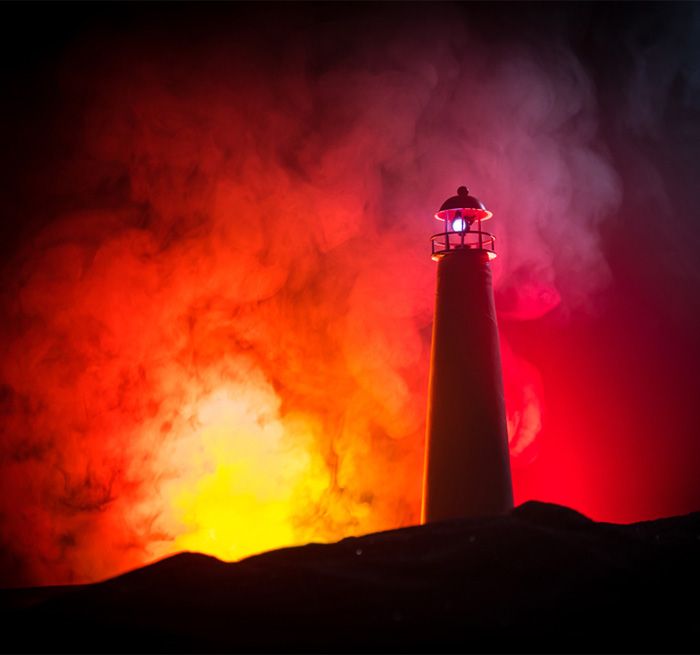 Here, people are only observed by the eyes of the night watch. The walls of Acre have not yet been completely built. Nor its lighthouse that looks over the sea to the west. The stones are cleansed by the sweat of the builders, scorched by day and then are cooled down at night by the waves of the sea.

The family sleeps, and Laila goes out under the cover of darkness. She shelters in the space between the piles of huge cut stones that are laid out east of the sea and the waves coming from the west. It does not occur to anyone that the night watch has eyes amidst the waves and in the labyrinth of emptiness among the stones.

Their love was forbidden. ‘Azim, a soldier in the guards of Ahmad al-Bushnaqi al-Jazzar, was not allowed to marry, and Laila was the daughter of a wealthy merchant family. They used to meet clandestinely there under the moonlit darkness where Acre met its waves.

“ ‘Azim, look how the sands of the beach delight when the waves break over them.”

“Laila, I will love you all my life. We will sit here, just the two of us, looking at these sands of ours.”

“But the sands of Acre will not be satisfied with one wave breaking over them.”

As dawn broke there came the din of the builders as they shifted the great building blocks day after day to line them up to make the great towering walls.  Not one of them realised that the damp patch yet to dry on a stone was ‘Azim’s semen. It was not the only stain on the rocks.

“The eyes of the night watch never sleep,” whispered ‘Azim’s comrade at the barracks into his friend’s ear.

On that morning, 13 October 1784, the din of the builders was unusual. For some minutes it masked the tapping of the chisels, and only shouts were heard.

On the site for the construction of Acre lighthouse, there were only men and one woman. She had been brought to trial for cheating on her husband with a lover from the neighbouring village, who was reputed to be a maker of fine ceramics and an innovative artist. His pieces filled the houses of the wealthy and well-off of Acre. But as for her, nobody could remember her name or family. All that was said was that her husband was a butcher who had been stricken by illness for a long time, that his skin was covered with pustules, and that he had been married to four women before here and had no offspring.

On this morning the two of them were buried alive beneath the lower stones of the lighthouse. Builders’ clay covered their bodies until they suffocated.

The commotion did not die down, but changed just as the tones of music change in a stirring symphony. After the shouts and cries for help, the roaring of the soldiers and the curses of the angry husband came the turn of the chisels and the orders of the soldiers as they tried to get the work going in an orderly way once again.

Life returned to its natural order until the setting of the sun.

‘Azim stuck to the peripheries of the city, leaving the barracks heading westward. Laila would be waiting for him after sunset. If anyone saw him in the darkness he would not be able to avoid suspicion. Indeed his tumultuous thoughts were audible behind the dark sleeping windows. “The eyes of the night watch never sleep” repeated unceasingly in his mind. He suddenly gave a secret smile, “But I know them all. If any of them saw me, would they denounce Laila and me?” He went on smiling and shaking his head, “Impossible, under any circumstances. I know how to conceal myself and protect her from any scandal. I will go to Laila and snatch delight from her after the toils of the day.” That was what went on in the mind of ‘Azim as he made his way to meet Laila.

She was waiting for him. She was sitting on the stone that had been laid out that day, its edges sealed with damp mud. ‘Azim reached her. His desire for her was like a volcano about to erupt. She turned into red-hot lava when she caught sight of him. They embraced, exchanging lascivious kisses as if they were at war, using every part of their mouths as weapons. Wildly, impatiently, they pulled off each other’s clothes. He fondled her breasts with his rough hands. Her trembling hands undid the cord of his trousers searching for his penis. She grabbed it at its base and took it up to her hungry mouth. She loved to savour its heat in her mouth, and relished its gradual swelling, inwardly proud at her ability to make it stand to attention. She looked at it fully erect and said with a chuckle, “There’s no need for the builders to wake up tomorrow. The lighthouse is already lit up.”

There was a crescent moon. Stealthily, it watched over the land. The eyes of the night watch never sleep.

I must go back to the barracks now. Before they notice my absence. He wiped the head of his penis against her breasts. Her mouth was still full, so she nodded her consent. She swallowed her saliva and whatever was with it. “You go first,” she said, “and I’ll follow after a little while.” This was what usually happened so they would not be seen together.

‘Azim went back to his barracks. He slept long and soundly.

On the western shore the waves crashed violently against the sands one after another.

Laila was down on her knees on the cold rough stone; she sucked the cocks of the watchmen one after another.

The spume of the waves drenched the sands.