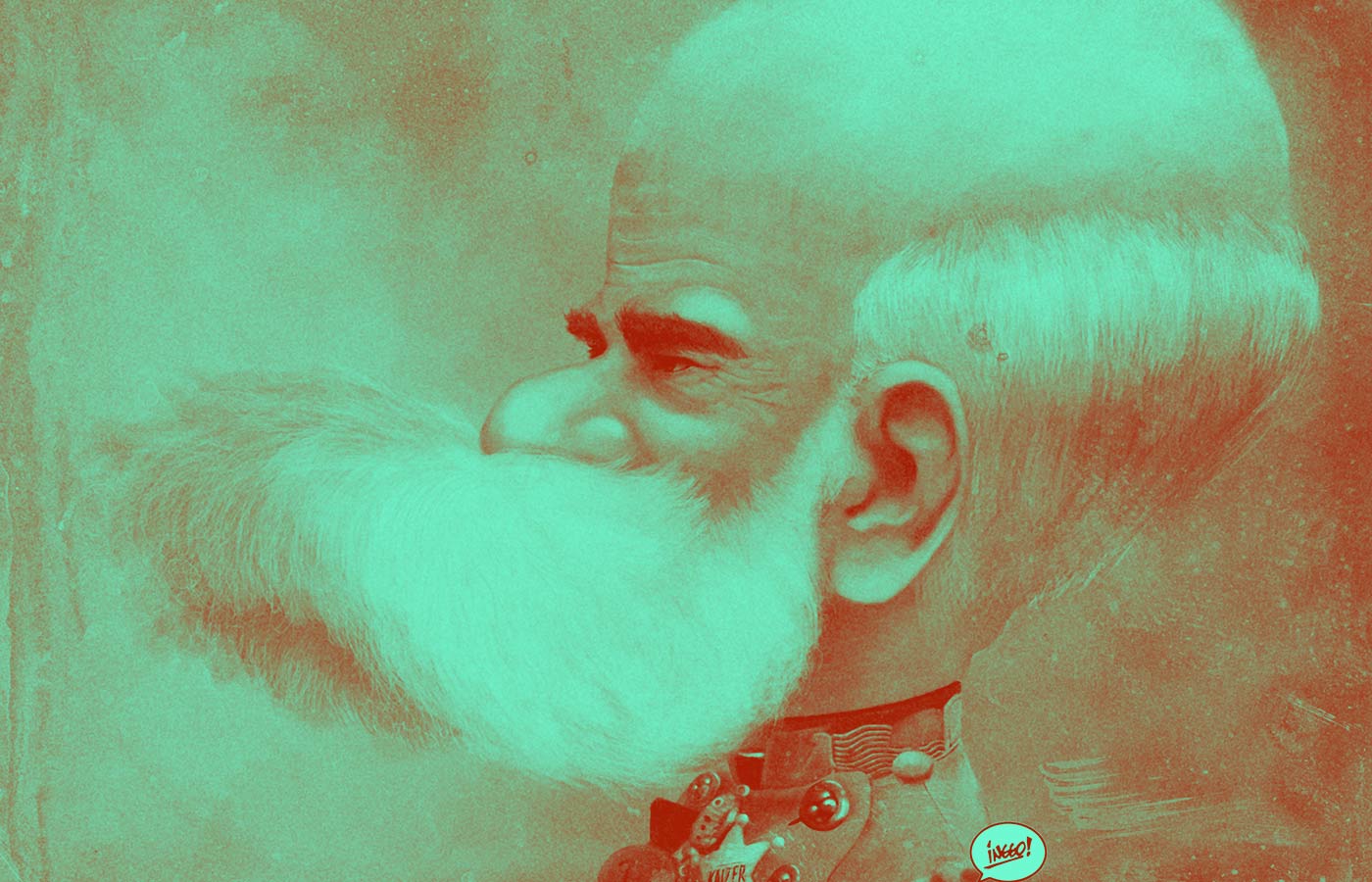 In Mladá Boleslav there lived a stationer called Petiška. He was a man who respected the law and had lived, for longer than anyone could remember, across the road from the barracks. On the Emperor’s birthday and other Imperial and Royal occasions, he would hang out a black-and-gold banner from his house and provide Chinese lanterns for the Officers’ Club. He sold pictures of Franz Joseph to gin shops in the Mladá Boleslav area and to the police station. He would have supplied portraits of Our Ruler to the schools under the administration of the local education authority as well, but the dimensions of his pictures did not conform to the specifications approved by the Regional Schools Council. ‘I’m sorry, Mr Petiška,’ the Imperial and Royal Regional School Inspector said to him once when they met in the Sheriff’s Office, ‘but you’re trying to give us a longer and wider Emperor than the one prescribed in the Regional Schools Council Instructions of 20th October 1891. The Emperor as defined in the Instructions is somewhat shorter. Only Emperor is 50 cm high and 36 cm wide are permitted. Your Emperor is 50 cm high and 40 cm wide. You reply that you have two thousand pictures of our Monarch in stock. Don’t imagine that you’re going to fob off any old rubbish onto us. Your emperor is shoddy goods through and through. And the way they’ve got him up is a scandal. He looks as if his whiskers have never been combed, there’s an enormous splash of red on his nose and on top of it all, he’s got a squint.’

When Mr Petiška got home, he said irritably to his wife: ‘That old Emperor of ours has landed us in a pretty pickle!’ And this was before the war had started. Mr Petiška had been lumbered, in short, with two thousand portraits of the Emperor. When war did break out, Mr Petiška was overjoyed and full of high hopes of shifting that merchandise of his. He displayed pictures of the bloodthirsty old codger in his shop under the inscription: ‘A good buy! The Emperor Franz Joseph for 15 crowns!’ He sold six: five to the barracks, where these lithographed portraits of the Last of the Habsburgs were hung up in the canteens to whip up the fervour of the reservists, and one which was bought by old Šimr, the tobacconist. This Austrian patriot beat him down to 12 crowns and still complained in heartfelt tones that it was daylight robbery.

All he received was a number of obscene communications, in which his anonymous correspondents advised him with total frankness to put his portraits of the Emperor where the monkey keeps its nuts, and yet another invitation to the Sheriff’s Office, where the Duty Commissar told him that he must follow the guide-lines issued by the Imperial and Royal Correspondence Office in the wording of his advertisements. ‘The Russians are in Hungry, they’ve captured Lvov and got as far as Přemyšl. You don’t talk about “glorious days” in the face of all that, Mr Petiška. It sounds as if you are amusing yourself, indulging in sarcasm and irony. With adverts like that, you could end up in the Castle, in front of a Court Martial.’

Mr Petiška promised that he would be careful and composed the following advertisement: ‘Every Czech would be glad to sacrifice 15 crowns for the opportunity to hang our aged Monarch in his home.’ The local journals refused to take the advertisement. ‘Good God, man,’ said one Managing Editor to him, ‘do you want to get us all shot?’

Mr Petiška went home very upset. At the back of his shop the parcels containing his stock of Emperor’s portraits were lying about all over the place. Mr Petiška dipped into one and was horrified by what he found. He looked round anxiously and was relieved to discover that no one had seen him. He began gloomily to brush the dust off the parcel and found that some were damp and mouldy. His black tomcat was sitting behind the parcels. There could be no shadow of doubt as to who was responsible for their moist condition. In an attempt to divert suspicion from itself, the cat began to purr. Mr Petiška threw a broom at the treasonous animal, and it fell silent. In a rage the stationer stormed into the living quarters and growled at his wife: ‘That bloody animal has got to go! Who’s going to buy an Emperor that’s been pee’d on by a cat? The Emperor’s mouldy. He’ll have to be dried out, God dammit!’

Mr Petiška’s afternoon nap, which he took while his wife was looking after the shop, was very disturbed. He imagined that the police had come for the black tomcat and that he, too, was being taken along with it before a Court Martial. Then it seemed as if he and the cat had been sentenced to death by hanging and that the cat was the first to go. And he, Petiška, was blaspheming at the Court in terrible language. He gave a fearsome shout – and saw his wife standing beside him. ‘Heavens above!’ she said to him reproachfully. ‘The language you’re using! If someone were to hear you like this!’

She reported in an agitated voice that she had in the meantime tried to dry the Emperor in the garden, but that some stone-throwing hooligans had used him for target-practice ‘and now he looks like a sieve.’

Other losses were registered as well. The hens had come and sat on one picture of the Emperor, which was drying on the grass, while they were going through their digestive processes and in the condition they were in, had turned his whiskers green. The young Saint Bernard belonging to Holeček, the butcher, which was a naïve young thing and had no knowledge of Paragraph 63 of the Criminal Code, had attempted to eat two pictures. That pup had it in its blood, though. Its mother had been destroyed by the knacker a year ago for eating the banner of the 36th Regiment on the parade ground.

Mr Petiška was not a happy man. In the wine-cellar that evening, he said something about the Emperor. The burden of his speech was that the authorities in Vienna looked on the Czechs with distrust because they weren’t buying portraits of the Monarch, at 15 crowns a time, from the firm of František Petiška in Mladá Boleslav.

‘Bring the price down,’ said the landlord, when it was closing time. ‘These are hard times. Horejsek is selling his steam-thresher for 300 crowns less than he gave for it last year and the Emperor’s in the same boat.’

And so Mr Petiška wrote out the following announcement and put it in the display-case in his shop window: ‘In view of the economic crisis, I am offering a large number of beautiful portraits of the Emperor, normally priced at 15 crowns, for 10 crowns each.’

And once more all was quiet in the shop. ‘How’s the Emperor going?’ asked our friend the owner of the wine-cellar. ‘Poorly,’ replied Mr Petiška. ‘There’s no demand for the Emperor.’

‘If I were you, you know,’ said the landlord of the wine-cellar in a confidential tone, ‘I’d try to get rid of him at any price, before it’s too late.’

And so the ill-disciplined black tomcat continued to sprawl all over the portraits of the Emperor. After eighteen months, the mould had even reached the Emperors at the bottom of the pile. The Austrians were on the way out and Austria as a whole was like something the cat had brought in.

And then Mr Petiška took paper and pencil and worked out with a heavy heart that he wasn’t going to get rich this way and that if he sold the Emperor for two crowns he’d still make a crown on each portrait.

And he devised some effective publicity. He put a portrait in the display case and wrote underneath: ‘This ancient Monarch reduced from 15 to 2 crowns.’

All Mladá Boleslav came that same day to Mr Petiška’s shop, to see how shares in the Habsburg dynasty had suddenly fallen through the floor.

And that night the police came for Mr Petiška, and after that things moved swiftly. They shut down the shop and they arrested Mr Petiška and brought him before a Court Martial for committing an offence against public peace and order. The Ex-Servicemen’s Society expelled him at an Extraordinary Plenary Session.

Mr Petiška got thirteen months of hard labour. He should really have got five years, but it was argued in mitigation that he had once fought for Austria at the Battle of Custozza. And the parcels of portraits of the Emperor have been impounded in the meanwhile in the military depository in Terezína, awaiting the hour of liberation when, on the liquidation of Austria, some enterprising tradesman will wrap his cheeses in them.

The story is now added to your reading wish list. All the stories you want to read are waiting for you in your new personal area
try it
10
Ursula Le Guin

The Author of the Acacia Seeds. And Other Extracts from the Journal of the Association of Therolinguistics