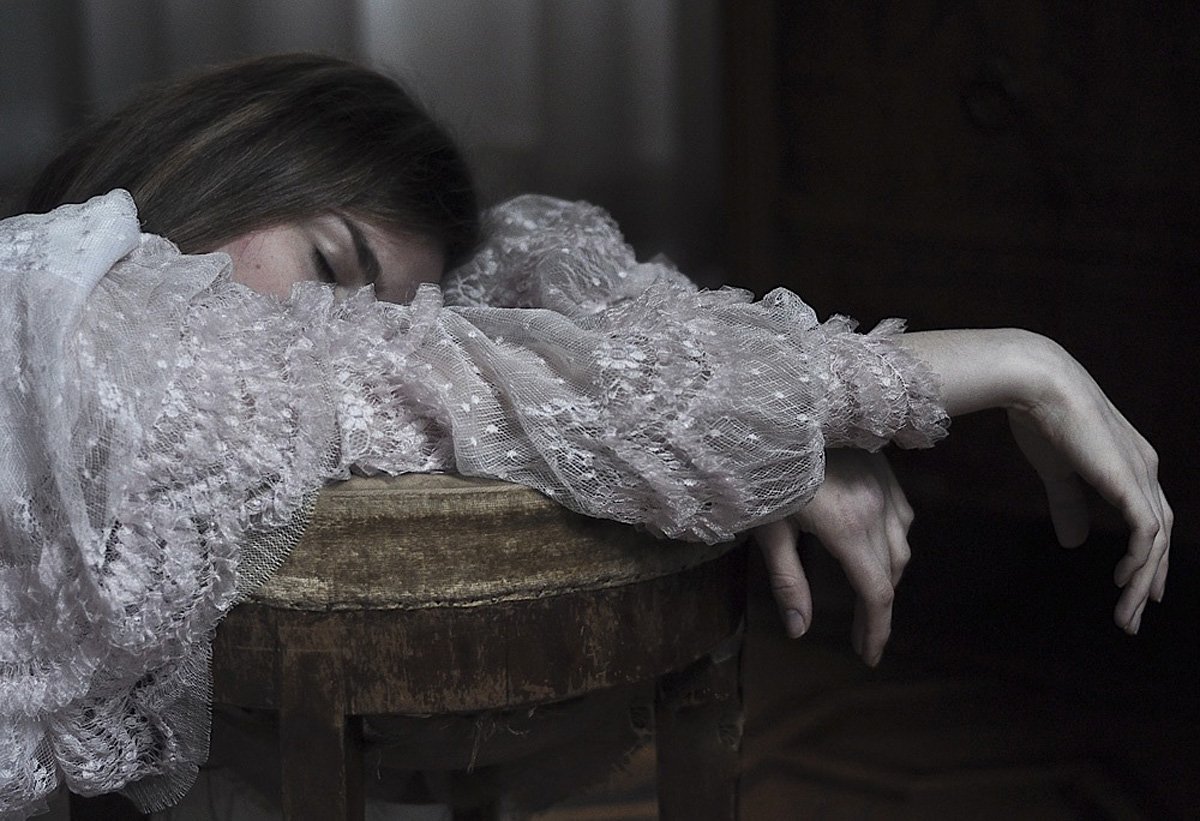 Alicia’s entire honeymoon gave her hot and cold shivers. A blonde, angelic, and timid young girl, the childish fancies she had dreamed about being a bride had been chilled by her husband’s rough character. She loved him very much, nonetheless, although sometimes she gave a light shudder when, as they returned home through the streets together at night, she cast a furtive glance at the impressive stature of her Jordan, who had been silent for an hour. He, for his part, loved her profoundly but never let it be seen.

For three months—they had been married in April—they lived in a special kind of bliss.

Doubtless she would have wished less severity in the rigorous sky of love, more expansive and less cautious tenderness, but her husband’s impassive manner always restrained her.

The house in which they lived influenced her chills and shuddering to no small degree. The whiteness of the silent patio—friezes, columns, and marble statues—produced the wintry impression of an enchanted palace. Inside the glacial brilliance of stucco, the completely bare walls, affirmed the sensation of unpleasant coldness. As one crossed from one room to another, the echo of his steps reverberated throughout the house, as if long abandonment had sensitized its resonance.

Alicia passed the autumn in this strange love nest. She had determined, however, to cast a veil over her former dreams and live like a sleeping beauty in the hostile house, trying not to think about anything until her husband arrived each evening.

It is not strange that she grew thin. She had a light attack of influenza that dragged on insidiously for days and days: after that Alicia’s health never returned. Finally one afternoon she was able to go into the garden, supported on her husband’s arm. She looked around listlessly.

Suddenly Jordan, with deep tenderness, ran his hand very slowly over her head, and Alicia instantly burst into sobs, throwing her arms around his neck. For a long time she cried out all the fears she had kept silent, redoubling her weeping at Jordan’s slightest caress. Then her sobs subsided, and she stood a long while, her face hidden in the hollow of his neck, not moving or speaking a word.

This was the last day Alicia was well enough to be up. On the following day she awakened feeling faint. Jordan’s doctor examined her with minute attention, prescribing calm and absolute rest.

‘I don’t know,’ he said to Jordan at the street door. ‘She has a great weakness that I am unable to explain. And with no vomiting, nothing…if she wakes tomorrow as she did today, call me at once.

When she awakened the following day, Alicia was worse. There was a consultation. It was agreed there was an anaemia of incredible progression, completely inexplicable. Alicia had no more fainting spells, but she was visibly moving toward death. The lights were lighted all day long in her bedroom, and there was complete silence. Hours went by without the slightest sound.

Alicia dozed. Jordan virtually lived in the drawing room, which was also always lighted. With tireless persistence he paced ceaselessly from one end of the room to the other. The carpet swallowed his steps. At times he entered the bedroom and continued his silent pacing back and forth alongside the bed, stopping for an instant at each end to regard his wife.

Suddenly Alicia began to have hallucinations, vague images, at first seeming to float in the air, then descending to floor level. Her eyes excessively wide, she stared continuously at the carpet on either side of the head of her bed. One night she suddenly focused on one spot. Then she opened her mouth to scream, and pearls of sweat suddenly beaded her nose and lips.

‘Jordan! Jordan!’ she clamoured, rigid with fright, still staring at the carpet.

Jordan ran to the bedroom, and, when she saw him appear, Alicia screamed with terror.

Alicia looked at him confusedly; she looked at the carpet; she looked at him once again; and after a long moment of stupefied confrontation, she regained her senses. She smiled and took her husband’s hand in hers, caressing it, trembling, for half an hour.

Among her most persistent hallucinations was that of an anthropoid poised on his fingertips on the carpet, staring at her.

The doctors returned, but to no avail. They saw before them a diminishing life, a life bleeding away day by day, hour by hour, absolutely without their knowing why. During their last consultation Alicia lay in a stupor while they took her pulse, passing her inert wrist from one to another. They observed her a long time in silence and then moved into the dining room.

‘Phew…’ The discouraged chief physician shrugged his shoulders. ‘It is an inexplicable case.

There is little we can do…’

‘That’s my last hope!’ Jordan groaned. And he staggered blindly against the table.

Alicia’s life was fading away in the subdelirium of anaemia, a delirium which grew worse through the evening hours but which let up somewhat after dawn. The illness never worsened during the daytime, but each morning she awakened pale as death, almost in a swoon. It seemed only at night that her life drained out of her in new waves of blood. Always when she awakened she had the sensation of lying collapsed in the bed with a million-pound weight on top of her.

Following the third day of this relapse she never left her bed again. She could scarcely move her head. She did not want her bed to be touched, not even to have her bedcovers arranged. Her crepuscular terrors advanced now in the form of monsters that dragged themselves toward the bed and laboriously climbed upon the bedspread.

Then she lost consciousness. The final two days she raved ceaselessly in a weak voice. The lights funereally illuminated the bedroom and drawing room. In the deathly silence of the house the only sound was the monotonous delirium from the bedroom and the dull echoes of Jordan’s eternal pacing.

Finally, Alicia died. The servant, when she came in afterward to strip the now empty bed, stared wonderingly for a moment at the pillow.

‘Sir!’ she called Jordan in a low voice. ‘There are stains on the pillow that look like blood.’

Jordan approached rapidly and bent over the pillow. Truly, on the case, on both sides of the hollow left by Alicia’s head, were two small dark spots.

‘They look like punctures,’ the servant murmured after a moment of motionless observation.

‘Hold it up to the light,’ Jordan told her.

The servant raised the pillow but immediately dropped it and stood staring at it, livid and trembling. Without knowing why, Jordan felt the hair rise on the back of his neck.

‘What is it?’ he murmured in a hoarse voice.

Jordan picked it up; it was extraordinarily heavy. He carried it out of the room, and on the dining room table he ripped open the case and the ticking with a slash. The top feathers floated away, and the servant, her mouth opened wide, gave a scream of horror and covered her face with her clenched fists: in the bottom of the pillowcase, among the feathers, slowly moving its hairy legs, was a monstrous animal, a living, viscous ball. It was so swollen one could scarcely make out its mouth.

Night after night, since Alicia had taken to her bed, this abomination had stealthily applied its mouth—its proboscis one might better say—to the girl’s temples, sucking her blood. The puncture was scarcely perceptible. The daily plumping of the pillow had doubtlessly at first impeded its progress, but as soon as the girl could no longer move, the suction became vertiginous. In five days, in five nights, the monster had drained Alicia’s life away.

These parasites of feathered creatures, diminutive in their habitual environment, reach enormous proportions under certain conditions. Human blood seems particularly favourable to them, and it is not rare to encounter them in feather pillows.