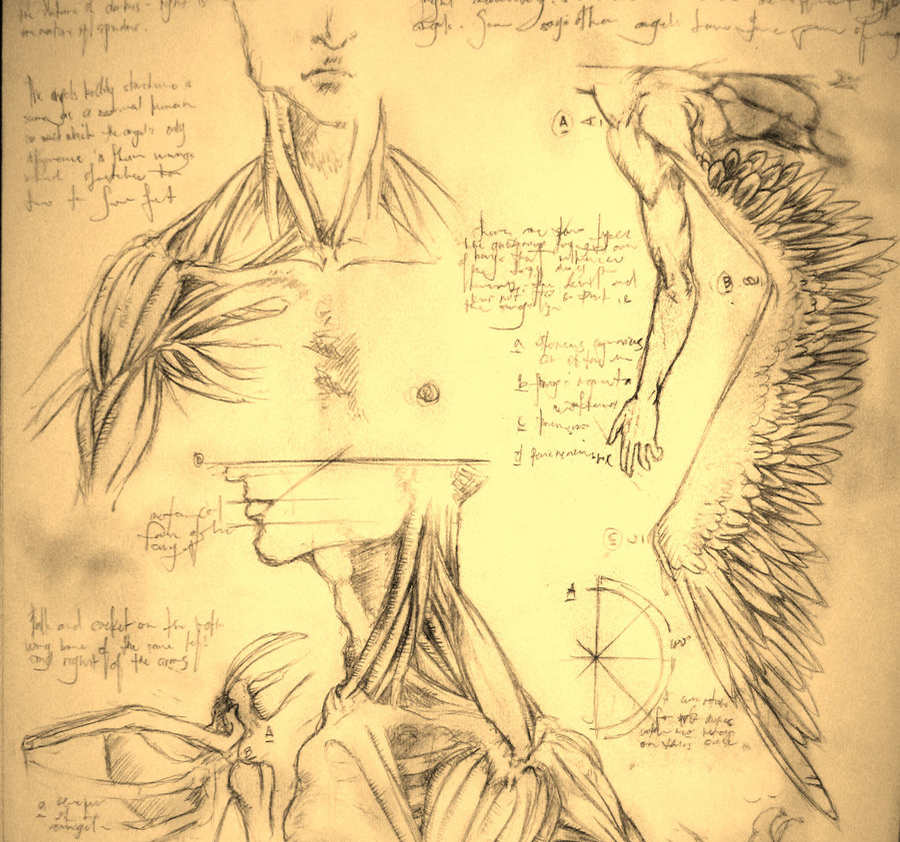 But now, as he stands in the older man’s bedroom, he feels as if skin is not the only thing confining his wings, but that they are also fastened by a cord that is contorting his entire body, as if he were one of the characters rolled up between the lines of his notebook.

The older man snuffles. He stands leaning on the doorpost of the bedroom door, following Jerry’s movements. “You can come over whenever you want to…I don’t keep the apartment locked.”

“I don’t know,” Jerry shrugs his shoulders. “It’ll stress me out.” He looks into the eyes of the skinny adolescent like a grayish line staring back at him from the mirror, thinking: I need to slip inside, and the closet door will close on both of us.

“Yes. Everyone runs into everyone else here…I’ll try to move into the far apartment,” the man thinks aloud. “I brought you a gift,” he moves closer to Jerry, producing from his pocket a small box wrapped in lined notebook paper and tied with twine.

“It stresses me out…”

“What stresses you out?”

“That everyone runs into everyone else. That they’ll run into me when I come over to your place.” Jerry passes the gift from one hand to the other, his fingers working the paper as if searching for his own character between the lines.

“No one really cares…It only seems that way to you. Besides…you’re allowed to come see me, aren’t you? It’s about work. That’s what you’ll tell whoever asks.”

“Yes.” Jerry looks out the window. A man and a woman pass by. Brief laughter rolls into the room. “…I told you so.”

Five seconds pass like the heavy beats of a bass drum. Neither one of them move. “Wings, wings, open!” Jerry whispers.

The man moves really close to him, really reaches over to him, his hand really, almost absentmindedly, unbuttoning Jerry’s pants.

As if he were busy, Jerry tries to untie the knot in the twine.

“Tear off the paper already…” the man says, in a slightly annoyed tone.

His palm is warm. Boiling. Burning.

Jerry closes his eyes. How much time is passing? What disaster is underway in the world? What’s gone awry in the order of nature to start the fire?

“It’s not getting hard,” the man says.

The door of the wardrobe moves and the entire picture of the room shakes as if in an earthquake. Only the man’s hand remains steady. It grasps Jerry’s dick so hard it hurts. Be careful, Jerry almost whispers, I have wings. They’re about to open up, and then I’ll fly away, Jerry almost says. But the man is not careful. Or maybe that’s just the way it is at the beginning – brutality, no concessions.

“You look wonderful.” The older man searches for Jerry’s eyes. For a moment he traps them, as if insisting on exposing the fraud. Jerry looks down, his eyes stopping on the bulge in the man’s pants. He has a big one.

What am I doing? What does he want me to do? What do I need to do?

“What exactly do you want?”

Sixty centimeters stand between the edge of the bed and the wardrobe door. They are four. Jerry watches them, imagining them struggling with one another, for life and death: their arms are wrapped forcefully around their bodies, there are no concessions. They fall. They rise. They push. They are drawn.

An earthquake begins, the mirror cracks, and one Jerry falls into the mirror. Now they are only three.

You three…you are the only ones who love me, a thought fleets through Jerry’s mind.

The large freckled ass glares in the mirror. It flashes at him. Dash dot, dash dash, dot…Jerry is excellent at Morse code. He follows the flashes, trying to decipher the message, as if it is already within him. The imprisoned message is somewhat frightening, confusing. The man’s ass is the opposite of that of a king, with small sores and all that.

Jerry is following a different message: “Come here, quick. Here, close. Hold it. Like that. Your mouth. Just like that. Do it right. Don’t rush it…” The man’s body blocks the flashes in the mirror, and to Jerry it seems to have gone dark. Suddenly. Darkness. His eyes are wide open but the world is in darkness and he is choking a little. I am trapped in the ruins of an earthquake. He tries to take a breath and feels his eyes popping out of their sockets.

Jerry inhales, fixes his gaze on the mirror, trying to receive more flashes. The older man reaches behind his back and slams the door of the wardrobe. “Later. Later. Don’t stop. All the way. Like that. Yeah, like that. Afterward I’ll do you, and you’ll watch yourself. And us, the four of us.”

With every breath of air, with every passing minute, Jerry tries to clarify the truth within him. But the truth contracts, or is hidden within the mirror, and Jerry asks the door to open. He counts: One. Two. Three. Four. Five. Six. Seven. Eight…Hot. It’s too hot in his mouth. On his forehead. Sweat drips from his face.

“You drive me crazy. Your tongue. I’m alive. Keep it slow.”

With an abrupt motion, Jerry reaches up and manages to open the wardrobe door.

“Looking at the three of you,” Jerry says, and takes a breath.

He has been buried beneath the ruins of an earthquake before, and then he felt a kind of keep on moving, keep on moving, keep on moving. He has the same feeling now, flowing like some sort of program for his hands and his feet, and perhaps sometime: he grabs hold of the man, pushes him back, and knocks him onto the bed. He takes out a box of matches, lights one, and moves it toward its greenish cover. And once the flame catches, he extends his index finger and places it over his lips, as if to say: Hush!

“Say the magic word!” Jerry whispers. He raises his head and looks up at the man from below. His stomach is glistening. All the hairs on his forearms are glistening. What a commotion, that earthquake. The man is writhing, pressing Jerry’s head against his stomach, as if to say: ask my stomach, ask whatever you want!

Jerry feels that it takes mountains of strength to emerge from the ruins and begin walking. The earthquake occurred many years ago, he thinks. He walks along the path that runs behind the older man’s apartment. There’s a light on in the window. There never was an earthquake, he thinks. Life is just like that, broken. The man calls to him from the window: “Hey, you forgot your gift!”

Jerry stands erect out of physical recognition, like an animal that is sleeping or wounded. Out of the same instinct he opens the notebook. A mad wind blows, and the intensity of the madness causes characters to move in and out from between the lines. He feels as if he is being carried on their backs, like Nils Holgersen on the back of the wild goose. From this height, the fields look like hopscotch squares and the houses are tiny. He thinks about Nils who heard the language of the wild geese, which has only two words: one that is more or less the equivalent of what is known as sky, and another for all other things.