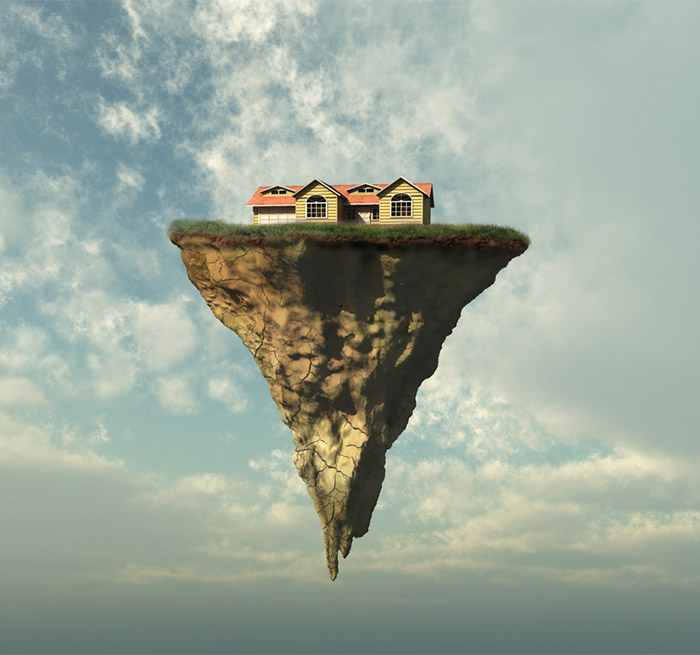 There was a wall of Ruth and Sam’s house that bordered the neighbor’s bed of ivy. These neighbors allowed the ivy to spread unchecked. It crawled up the wooden fence and weighed it down so that the fence now listed dangerously to one side. Then it overtook Ruth’s carefully tilled flowerbeds and strangled the roses. It even made its way toward their house after dark, sneaking up like a band of terrorists. For a while, she’d tried to tear it out, whacking at it with shears, brutalizing tendrils and shredding the sharp little leaves, but it continued to spread and grow like a cancer, she told Sam, just like a bad cancer, a melanoma.

We could try poison, Sam told Ruth. There’s a kind of poison that will kill ivy, I’m pretty sure. But we wouldn’t want it to kill the cat, said Ruth. True, said Sam.

They were getting ready to go to bed. Ruth had smeared on some kind of cream which caused her face to gleam in an unpleasant way. Why she always got so greased up before bed was a mystery to Sam, who was propped up on the pillows reading a magazine article about one of the candidates. Perhaps it was a way of avoiding sex. Hey get this, he said, and he went on to read a very long and tangled criticism of that candidate’s economic policies.

I wish this election were over, Ruth said, so you could talk about something else. I am passionately concerned, he agreed. Then they turned out the light.

The next morning the neighbor’s ivy was gone and in its place was another part of the city. How odd, said Ruth, regarding a group of children with spray cans of paint and another group of children passing envelopes to people in cars in return for cash. We seem to have changed neighborhoods overnight. She stood at the window that had formerly held a view of the brick sides of the neighbors’ house and all that ivy. Sam was in the kitchen grinding the beans for their coffee. Usually the noise of the grinder overpowered every other noise, but this morning it was very faint in the din coming from the city street: cars honking, tires screeching, sirens, glass breaking, gun shots, et cetera.

When she joined Sam in the kitchen, things were calmer. The view from that window was the same as always—a bland lawn (theirs) and a tree with a twisted trunk, like the arms of a contortionist. Something’s happened, Ruth said, and she explained. Sam rolled his eyes. You are a dreamer Ruth, a big funny dreamer. Come look for yourself, said Ruth. In a minute, said Sam. First I’m going to drink my coffee and then check my email. Maybe there’s some new news.

Ruth returned to the bedroom. She considered it possible that she’d invented this strange turn of events, as wish fulfillment. Perhaps her desire to banish the neighbor’s ivy extended to the neighbors themselves—it was entirely possible. She disliked them. Once the woman told her that she overheard “every word” of Ruth’s telephone conversations. So you should keep your voice down, concluded the woman triumphantly. Another time, the man offered her a very strong gin and tonic when Sam was at work. Stupidly, she drank it and became drunk and wound up laughing with the man over nothing. After that, he’d acted as though they had a special bond.

Yes, her mind might have been playing tricks on her. But when she went to their bedroom window she saw a group of police with clubs chasing the kids with the spray cans of paint and one of the kids shot a spray of silver paint on their bedroom window as she raced passed. This was a lanky, awkward-looking girl wearing a baseball cap and very orange lipstick. For a moment, Ruth thought she would come crashing into the bedroom.

Sam! Ruth shouted, but when Sam didn’t answer she thought the better of it. Why involve Sam? He would find out sooner or later and it would make him angry. He would blame her. He would think that her obsession with the ivy had produced this consequence. That’s the way Sam was. He was a fan of the status quo—and Ruth, he believed, always threatened to tamper with it.

He sat in front of his laptop, finger-mousing his way through the New York Times. He was obsessed with the upcoming election because it meant, he explained to Ruth, a new chapter in history. Our hopes and dreams will be fulfilled, he prophesied, sounding a little too much like a sound bite from his candidate’s stump speech.

But really, there was nothing more important these days, he thought, pausing at the latest Gallup, which favored a landslide. Outside the birds were chirping, a sound most pleasant on this Sunday morning and Ruth, mercifully, had ceased to call out to him. He imagined her industriously cleaning out a drawer or sewing a button, though these were things Ruth never did. In the distance, he thought he heard her cry out and what that was about he did not know. Ruth was not the type of person given to crying out.

Not for the first time, Sam considered his choice of Ruth. That he could have done better occurred to him occasionally; everyone had told him so way back when. His ex-wife had been especially adamant. She is not your type, mark my words, Myranda had said. But, at the time, Sam could not be deterred. Ruth’s sensibility appealed to him—he had seen her as eccentric and cultivated. Now he believed her neurotic.

What’s so funny? he shouted, because suddenly he heard her whoop with laughter. Nothing! Ruth shouted back and then broke into a fresh bout of laughter. He knew from the sound of it that whatever it was would not amuse him. He would rather be checking the news on his candidate anyway.

The thing about the candidate was that he heard from him everyday. A personalized email that began, “Dear Sam,” and then went on to report the progress of the election. Sam knew that the email was not really from the candidate, but he still liked the idea of getting this correspondence: to pretend that the actual candidate had emailed him, that he and the candidate had a personal relationship was only a small leap of faith under the circumstances. He liked to imagine the candidate calling him up for advice or just to relax and laugh on the phone, the candidate confiding, “if it weren’t for you—” and “man, I really need your help.” In fact, the emails themselves said something similar to the above, which is why Sam found himself donating more and more money to the candidate’s campaign.

Ruth did not know why she was laughing, but on she laughed. She beheld a city under a hot, flat sky: the homeless and their shopping carts piled with bottles and rags; dead-eyed teenagers plugged into headphones; taxis screeching to curbs to retrieve or deposit business-suited passengers with hard mouths. Across the street, a tall building had sprung up, gunmetal grey with row upon row of window squares that put Ruth in mind of hundreds of blind eyes, staring down at her. Ruth no longer cared if Sam joined her at the window. It seemed to her that it was all a joke, the house, the ivy, the incomprehensible city street—even Sam himself, her partner in another room, was a form of tragic irony perpetuated by the gods, whoever the gods were. She laughed a little bitterly.

And Sam called from the other room. What’s so goddamned funny? But she didn’t answer. She didn’t want to hear his voice.

Gripping the sill, she stuck her head out. A hot breeze slapped the sides of her neck, the sun dug into her hair. A mother dragged a child by one arm; a cat huddled near a fire escape. Three women brushed by, so close she could smell their perfume. Arm in arm, they walked, speaking in high, beautiful voices. Right where the ivy had been so recently flourishing, a pigeon with an iridescent throat flapped its wings.

What to make of any of this, Ruth did not know. It was like a certain kind of dream, unbearably sad and unbearably real.

Sam listened to Ruth’s laughter fade, the way you might suddenly realize that a movie or dream were about to end or that one phase of your life were about to vanish forever. He felt the urge to touch her, to enfold her in his arms, to preserve a little last shred of her laughter, to feel it tremble against his chest.

*Karen Brennan, “The Migrating Wall” from Monsters. Copyright © 2018. Used with the permission of The Permissions Company, Inc., on behalf of Four Way Books, www.fourwaybooks.org.