The Policeman and the Horse 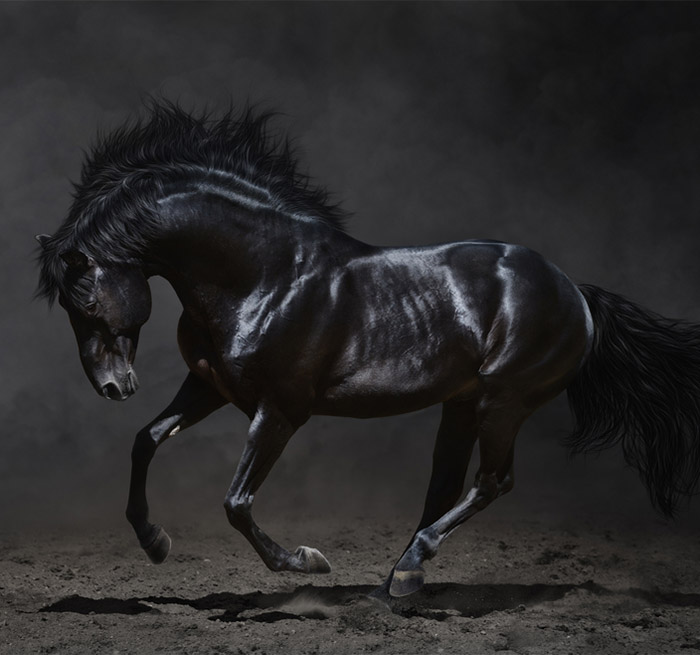 The Policeman and the Horse

Abu Mustafa parked his carriage next to the sidewalk. With a large, gnarled hand he patted his horse’s head, then headed into the nearby shop. He began hoisting bags of firewood on his back and carrying them to the carriage.

The horse was angry for no reason. But his anger began to subside after finding a piece of watermelon rind that he chomped in silence.

Suddenly the horse noticed a small boy standing nearby, staring at him and smiling. The horse said to himself: “I don’t know this boy. If he comes closer, I will kick him. I will kick a kick that’ll break his head.”

Shortly the horse finished chewing the watermelon rind, and self-pity set in. He began to stare at the boy with hatred, saying to himself: “I am going to kick him.”

During these moments, Abu Mustafa was absorbed in moving the bags of wood and placing them on the roof of the carriage.

The horse was tired and complained to himself: “Justice is lost.”

The horse had been born in the city, and he had spent his whole life on its asphalt roads. He had never once left. His ancient grandfathers used to romp free through the wide prairie where there were no buildings or walls or stones. But they were all dead.

The boy bent down and picked up a watermelon rind that was out of reach for the horse. The horse backed away but out of courage did so slowly. The boy held out the watermelon rind near the horse’s mouth. The horse hesitated for a brief second, then snatched the rind in surprise, and started chewing rather happily. Then he let the boy stroke his neck with a small, gentle hand.

Abu Mustafa finished loading the wood on the carriage. When he noticed the little boy near the horse, he yelled: “Get away, you monkey.”

Then he waved his whip through the air and let out a cry, commanding the horse to go. The horse started forward, slowly pulling the heavy carriage.

The carriage passed through a number of streets, eventually coming to a wide street lined with stone buildings on both sides. Before it could get part way down the street, a policeman blocked its way. Abu Mustafa yelled a long-drawn-out “hish” at the horse.

The policeman said: “Don’t you know that carriages are not allowed on this street?”

“Then what are you doing here?”

“My horse, look at him. My horse is worn out. If I took the other street, then I would be asking too much from him.”

The horse felt deep sympathy. The policeman said: “Carriages are not allowed on this street. Only cars and pedestrians.”

Abu Mustafa said: “I know.” He licked his lips and continued, saying: “The horse is tired. If he dies, my livelihood is stopped. I will starve to death, and so will my children. I have four children.”

“Go back, and I won’t punish you for breaking the system and the law.”

“I have four sons who eat rocks,” Abu Mustafa said, getting down from the carriage. He let out a short, dry laugh that was like a small, violent knife. He said: “I’m telling you the truth. I don’t fear for my children, I fear for their mother.”

Curious, the policeman asked: “Why do you fear for her?”

The trees were green along the sides of the street. Blue vastness stretched across the sky. And Abu Mustafa replied: “I fear that my children will eat their mother if they are starving. Their teeth are monsters.”

A car passed at high speed so the policeman blew his whistle, but the car did not stop. The policeman was able to read the license plate number before it disappeared, he wrote it on a page in his notebook, and then – his face swollen with anger – he turned to Abu Mustafa and said: “Now, go back.”

“Please let me pass, just this once.”

The policeman said sternly: “Did you hear me? Go back.”

“Go back. The law is the law. No use in pleading.”

“My horse is tired.”

“May God keep you, for your mother’s sake.”

“God, do not keep me! I do not make the law. I do what I am commanded to do, and you must obey these commands.”

Abu Mustafa stood there for a few moments, until the policeman yelled: “Go back. If you do not go back now, you will regret it.”

Abu Mustafa turned toward the carriage. But the horse’s anger had become explosive: with all of its might, berserk, it charged forward. The policeman saw the carriage coming at him, he tried to jump onto the sidewalk, but did not make it. The horse crashed into him, throwing him onto the ground on his back. The horse’s hooves crushed the policeman’s chest, then the wheels of the carriage ran over him, becoming red with blood.

The horse was surprised to see that his owner was not happy, that he was panicked and morose, and that he then took off running, fleeing.

A moment later people came running and circled the carriage. Their eyes shone fear mixed with hidden desire, as if the crushed policeman was the body of a beautiful woman.

The people did not leave until policemen arrived, who then set out to catch the murderer.

The judge was just; he sent the horse to a major stockyard. It seemed to the horse that this must be what was left of the prairie.

The horse stood there in the yard and he was happy – on his way to the stockyard he had travelled through wide streets that he had never been permitted to use before. But his bliss did not last long because soon he was hanging by his neck.

*The story was published in the collection Al-Ra’d (The Thunder), 1970, and in this English translation in Banipal Magazine of Modern Arab Literature No. 53, 2015.