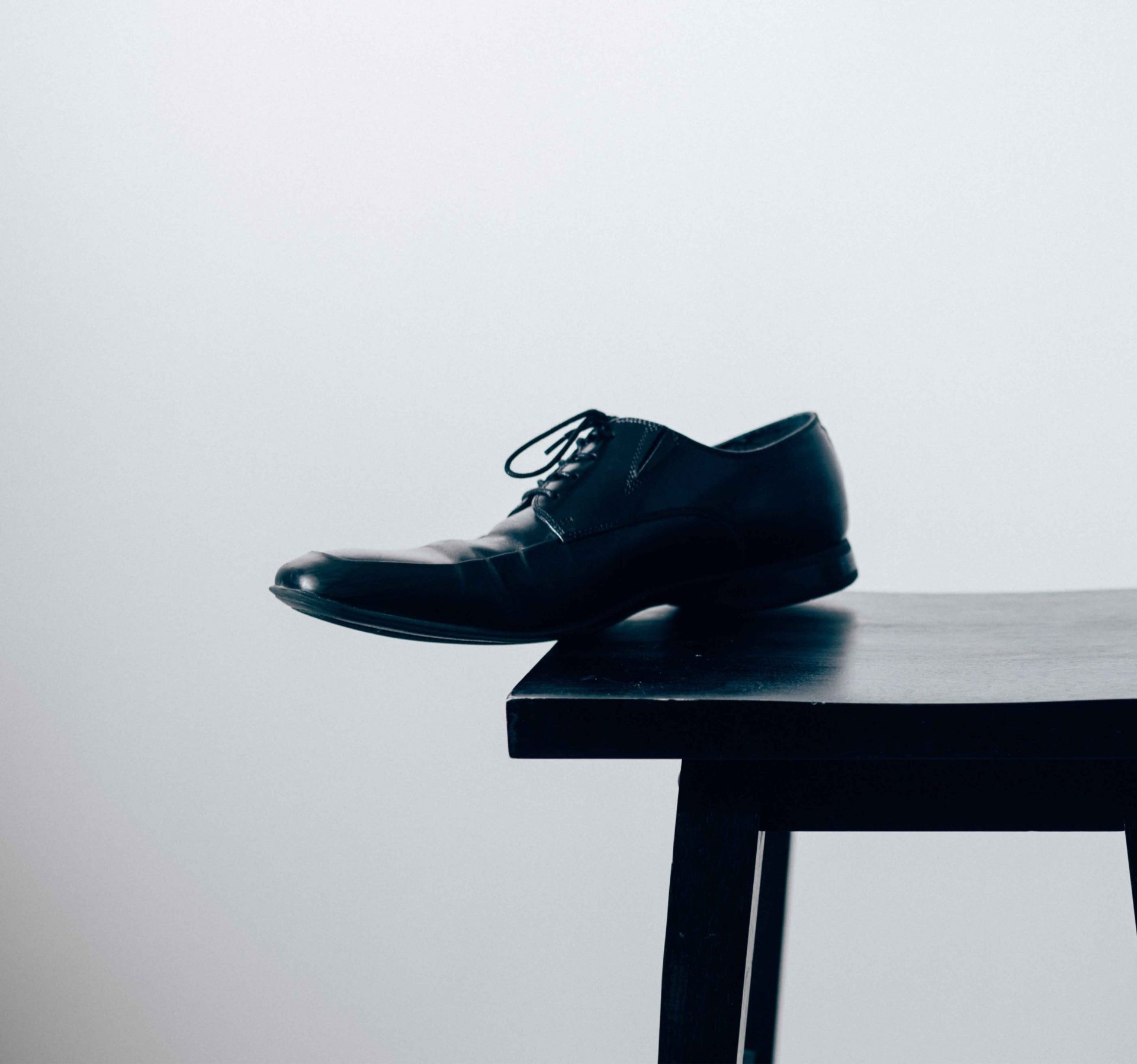 “A black shoe in the entrance to a building” opens the story by young Palestinian writer Hisham Naffa. It seems that the main protagonist of the story is a single, not very scruffy, black shoe left in the entrance to a building. In fact, the true protagonist is the humdrum routine that gives the shoe the importance ascribed to it and the element of surprise present throughout the text. People leave the building for work, school, and the daily grind, but they leave and return and the building always remains the same. How strange then that this repetitive flow of existence, where everything is fine, should be disrupted by an unwanted guest seemingly outside of time and place, without an owner or seeker, and perhaps stranger yet without its matching shoe.

“A single shoe in good condition at the entrance to a large building wasn’t something that happened every day,” writes Naffa. But in fact, the extraordinary event is not the presence of the shoe, but the person who notices it and the thoughts that occur to him. The action in the story takes place in an extremely limited space of time – the time it takes the narrator to go out to buy a pack of cigarettes and some tomatoes and come back with the cigarettes and without the tomatoes – during which the residents of the building walk past the shoe without ascribing it any special significance, and should one of them have done so, that remains beyond the consciousness and mental world of the narrator. All the same, the shoe leads the narrator to an outpouring of feeling and ideas that make him wonder about contemporary human existence, civilized, urban, alienated, and based on repetition and routine that causes individuals to feel indifferent to their material and immediate social surroundings. Within this reality, the constant presence of neighbours caught up in their endless routine does not make the narrator (who represents us) anxious about the wellbeing of others part of his environment or about the essence of his existence in the way that the shoe interests him. The shoe is alien, invasive, shocking, tearing at everyday appearances, and calling for a reappraisal of the fundamental and social truths that support him.

I had headed out to buy a pack of cigarettes and a few tomatoes, and there was a black shoe in the entrance to the building. A black shoe, just one, on the second tile beyond the doorway near the stairs. The tiles were neither white nor coloured but varied between light and dark due to the passage of time and the passage of the shoes of people going up and down, whether to and from work or school, or visiting family and friends, or going out for no other reason than to relax on a pleasantly breezy evening or on a weekend morning. That’s to say nothing of going to a nearby café or cinema or a meeting for whatever purpose. They might be heading out to a shop, clinic, or market, or to pay the electricity and water bills at the bank or send a letter from the post office. Then again, they might have been obliged to come down from the floors above to show the gas delivery man, who was new at his job, the location of their empty gas cylinder that needed replacing. There were mouths and bellies to be fed, as well as hands and minds that wished to be mildly and pleasantly occupied for an hour or two cooking, distracted from work worries, family problems, and passing quarrels with family and friends, or the rising cost of living, or anxiety about what might happen to mother, who still had a strange pain in her side, or the lack of a reply about a job two weeks after sending out a CV.

Strange that a single shoe should be there like that, the heel towards the outside and the pointed toe towards the inside. It could still be worn, and might even be considered new given that it was quite shiny. A little black shoe polish and three or four deft, or even clumsy, strokes would make it as good as new again, refreshed, just like a person who’s taken a leisurely hot bath after an afternoon nap before going out in the evening to a restaurant with friends, or even alone to an unassuming café near by in the hope of meeting friends and acquaintances, or simply staying in and listening to music or reading a novel or the news or features in the paper, or even a few pages from last week’s supplement, or sit languidly and have a drink on the balcony.

A single shoe in good condition at the entrance to a large building wasn’t something that happened every day. It might happen once a year to some, but only once every five years to others. Then again, it might not happen at all, even if one lived a long time. Take me, for example. It was the first time it had happened to me, as if there was something special, or even miraculous, about it, whether for good or ill, that only the lucky got to enjoy. It could be compared to unexpectedly falling in love, the reverberations of which could be heard in the racing of the heart inside the ribcage, and which you didn’t know how to handle. You’re as happy as a child about it but also as scared as a child at the way your loneliness has been invaded, loneliness which itself always makes you scared.

It was like hearing about an accident in which an old friend had died. A friend whom you hadn’t seen for a year and a half, and to whom you had given little thought and didn’t call, and in fact, when you missed his call once, you didn’t try to call him back. You would feel a sadness mixed with guilt and shame because you would be standing powerless right in the face of a death you never even thought about and that came knocking at your door in the black hours before dawn and shook you out of the warmth of your bed and the innocence of your dreams to make you get up in apprehension to open the door as you repeat inside, “Please God no more bad news.” Then, when you open the door and find that there’s nobody there, you only feel more apprehensive and disoriented.

Perhaps the single new shoe at the entrance to the building was more like seeing some clothes on the beach plastered with brownish-yellow sand that had belonged to someone who went into the sea and drowned. The waves had washed them up as a sign to the people on dryland that one of their sons or daughters had been swallowed up by the graveyard of the deep.

Going near the shoe was scary. It might have been packed with explosives and targeted one of the residents. That would mean calling the bomb squad. Perhaps there was something strange going on and it had been put here to signify emptiness. A shoe devoid of a foot next to the stairs, going up or going down, a shoe without its usual partner in a pair of shoes. Did that single shoe beneath five floors inhabited by dozens of people scream at all of them to pay attention to life? Did it want to tell us: “I am like the life which you will one day depart, with the same ease, indifference, and calm with which you take off your shoes before bed”? Was it there as a sign of death and death’s emptiness, like the verse saying: “Remind, in case the reminder should be of benefit”? Or was its presence here in all its blackness just one of those run-of-the-mill coincidences whereby people inundated with names, faces, and CVs die without having done anything to deserve being punished with so much death?

I kept going to the shop. They didn’t have my brand of cigarettes. I went to the shop in the next street. I headed back with my cigarettes, lighting one up on the way and forgetting the tomatoes. When I reached the entrance to the building, the shoe had vanished. A cold shiver ran through me. The place seemed so empty, emptier than ever.

Photo by Mark Rabe on Unsplash

The story is now added to your reading wish list. All the stories you want to read are waiting for you in your new personal area
try it
7
Tove Ditlevsen