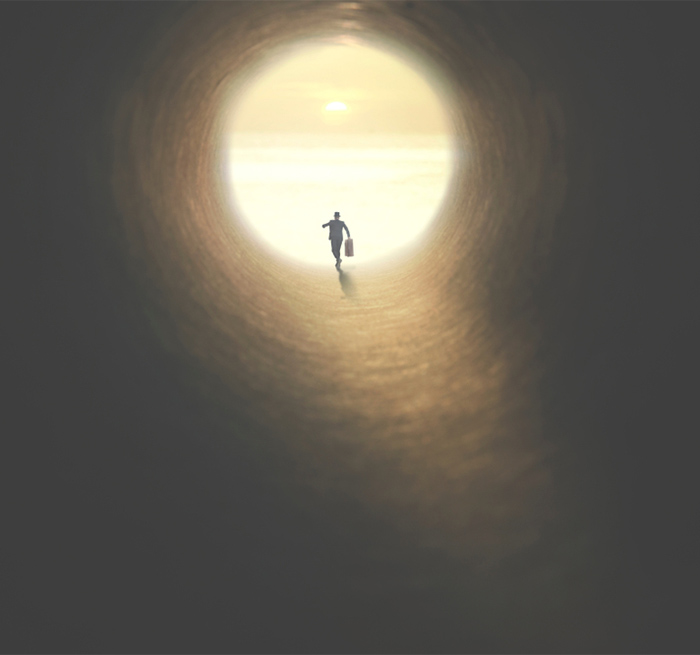 “The invention of the soul allows us to conceive of the body as a parasite. Hands can be objects that are devoid of feeling during the day but soft and tender at night. These actions do not contradict one another. They take part in the dual situation of not being me and nonetheless being mine.”

The phone rang, and when I answered it I heard a mumble and a stammer, then a cough. A few seconds later I heard a male voice: “You’ve most certainly forgotten, but you once promised to publish my book. We met in Baqa, Baqa al-Gharbiyye. You gave me your phone number and your email address. You haven’t changed it, but you’ve not been answering.”

He tried to refresh my memory about the conversation we had that evening in Baqa. As it turns out, it was an event that took place some ten years ago. “Are you in hiding?” he asked, “or has it still been possible to reach you?”

“I do that too. I distance myself from people.”

He chuckled. “It’s a long story, and I promised myself I wouldn’t take up your time.”

“Email me the manuscript,” I said. “I promise, I’ll read it and write to you.”

“I would prefer to show it to you.”

His persistence annoyed me.

Based on his rich Hebrew vocabulary, it was clear to me that he was a man who had read many books in Hebrew, although his heavy Arabic accent smoothed it somewhat, and the language sounded affected at times. “OK,” I heard myself say.

It was August, and I was exhausted by the humidity. I never left the house and I did not feel like hosting, as I am fanatical about my freedom. What had come over me to make me acquiesce? I dialed his number with the intention of postponing the meeting but I hung up at the sound of the ringtone and grumbled to myself. I suspected that it was the fact that he was an Arab that had caused me to acquiesce. I stood by the window and peeked outside at Rothschild Boulevard. The street was packed and the sky had a reddish hue. The air-conditioner gurgled softly, producing sounds reminiscent of the large fan my father had installed behind the “cooling rack” he attached to the window in their small apartment on the kibbutz. Another person trying to fix the world… An hour passed, and the man did not turn up. I searched for stars in the sky which had grown dark, but I knew I would not find even one in the Tel Aviv sky. Then I heard a sort of scratching at the door. I went to open it. In the entrance stood a tall man wearing a white shirt, a yellow bow-tie, and black patent leather shoes. With his right hand, he grasped the handle of a blue trolley bag. “Doesn’t your door have a doorbell?” he asked.

“The button’s right here,” I said.

“Is it? I’m half-blind. It comes with the years. We don’t die all at once. We do it in installments.”

“Come on in,” I said. He walked in, pulling the trolley behind him, and he stopped in the middle of the room.

“Aren’t you hot? You’re dressed as if it’s not sweltering outside.”

“Hot? No. My father, may he rest in peace, used to say: ‘What people see is more than what they think. How you dress is your opportunity to be who you want them to think you are.”

He smiled, and I noticed that his two front teeth were broken. I gestured with my hand toward the sofa. “Please, have a seat. I’ll bring us something cold to drink.” He followed my movements. I could feel his eyes boring into my back. I almost turned to face him. What was I thinking when I invited him over? When I returned he was seated calmly on the sofa, his right hand grasping the trolley handle. I put the glass of cold water down on the table, and my gaze swept over his face. It was narrow and emanated fragility. For a moment he seemed to tense up inside himself, but then I saw him relax, lift the trolley and place it on his lap, open it, and remove a tall stack of pages that were tied together with twine. He placed the bundle on the coffee table. It was at least thirty centimeters high. Printed across the top page, in large letters, was the title: “Kaddish.”

“Wow.” The word escaped my lips. “How many years did it take you to write that book?”

He shrugged his shoulders. “Who knows? My grandfather started writing it, and then my father. I finished it, or at least it seems that way to me. You tell me.”

“I don’t live anywhere.” He cleared his throat. “In our little village by the sea, where I come from, there were guys who ate in a different house every day. My father used to say, ‘They don’t want to forget their true home.’ I spend every night in a different house. I have a brother-in-law, my late sister’s husband, whose house I sleep at two nights a week. I have a friend, a fisherman, and I can sleep at his place when I need to. I once lived in Baqa, but the house was designated for demolition and then demolished. I rented a place, but when I got sick and was in the hospital they stole everything I had except the manuscript and the books. The fisherman is keeping them for me, and I keep the manuscript in the trolley. After everything that happened to my family in the village by the sea and to me, I don’t want to settle down permanently anywhere.”

“What did you do before they demolished your home?”

The man wiped the beads of sweat from his forehead with a handkerchief and smiled at me. “I did what you told me to do, during that conversation in Baqa – you told me to smuggle myself, to sneak about, to slip away. You said then that this was human nature, that people cannot do anything in a straight line. That one always needs to maneuver between the forces of evil and insanity.”

I smiled. I did not remember telling him anything of the sort. He looked at me and closed his eyes for a long moment. When he opened them he said: “The moment a person acquires the power of some kind he becomes evil. Someone holding a knife – stabs. Someone holding a gun – shoots. And someone holding a pen writes laws that are always on the side of the thieves and the murderers. This applies to the entire human race, as well as to animals. Wolves devour sheep, lions devour zebras. I read what you wrote – that even when your father tried to fulfill dreams of justice and equality it turned into a nightmare. Dreams are only good when they remain in your head. If you want to fulfill them, it becomes a nightmare.” He took a sip of water from the glass. “It’s impossible to resume living normally after they demolish your home. And if you’re an Arab, you best learn how to speak about.”

Something inside me wanted him to leave. I stood up and opened the window. The air that flowed into the room carried the sounds of a piano as if trying to say: “Look, Iftach, I brought such and such, and such and such – that is, this and that type of jazz, and a good imitation of Ella Fitzgerald singing ‘Dream A Little Dream of Me.’ Free yourself of this guy…he brings nothing but trouble!” But I immediately became suspicious of myself and asked: “How do you make a living?”

“I’m a smuggler,” he said. “My father was also a smuggler. After your War of Independence, the people who fled to the Gaza Strip wanted to move back to Israel. He would smuggle them. When the Egyptians came to the Strip to introduce order, they closed off our village. He smuggled us out. That’s how we got to Baqa. My grandmother was also a smuggler. During World War II my grandfather was drafted and she smuggled meat, tobacco, and other contraband.”

“What do you smuggle?” I asked.“I smuggle myself. I’m the only one left from my family. My sister got married and died of an illness. My older brother went to Jordan and was killed in Black September. I stayed in the house until they demolished it, and since then I’ve been smuggling myself.”

“So, the book is your family’s life story?”

“No, no. The book is about the war against ego. That is, war against the temptation of believing that you have the ability to change things. It was my grandfather who started the war. He would say Kaddish for the ego every morning and every night, in Hebrew, to make his life miserable. This book contains the history of all the wars against ego.”

The man slowly untied the knot on top of the bundle, pulled out the first page, and said: “This is the preface that my grandfather wrote. He was a fisherman, but he had books that he would copy out of: ‘God is a cosmic wolf, the tyrant of all tyrants, everything is his work: the hungry wolf, the frightened sheep, the struggle for existence, cancerous illnesses, heart attacks, insanity. He created all the evils that you know and can imagine. They say he also creates new angels every day. They ingratiate themselves with him and sing him songs of praise, and then when their ego sprouts and grows they are destroyed.’”

“So, your god is some kind of a heavenly wolf?”

He was silent. I walked over to him and picked up the stack of pages, read two of them, and said: “Leave it here. I’ll read it. Do you have a copy?”

“No,” he said. “I didn’t plan on leaving you the book. I also didn’t intend on you publishing it. Who needs books in our day and age? Not even the authors themselves. All I wanted was to speak to you.”

“I know a few people who need to do that,” I said.

“No. It’s surrendering to the ego.”

He straightened up, retied the twine carefully around the stack of pages, and placed it back in the trolley that was on his lap. Then he stood up and made his way to the door, pulling the trolley behind him. I walked him to the hallway, and I told him again that I’d be happy to read the book. “Thank you very much,” he said. “But what can literature do? Nothing. Good night.”