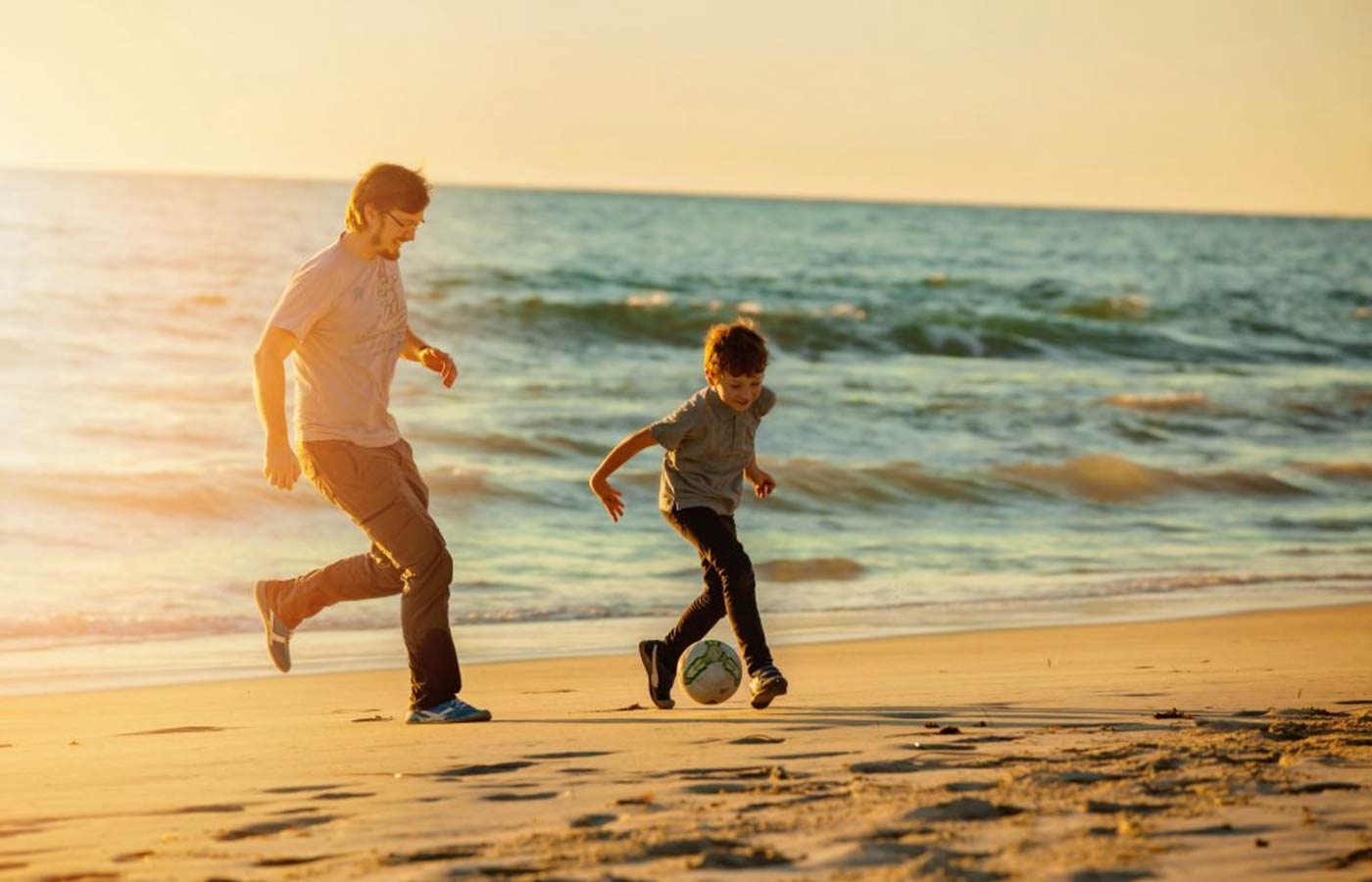 It’s a rough summer morning in Misiones, with all the sun, heat and tranquility that the season can provide. Mother Nature, open to the skies, seems proud of herself.

Like the sun, the heat, and the tranquil atmosphere, the father opens his heart to nature.

“Be careful, little one.” He says to his son, summarizing in one phrase all of the observations of what could go wrong, and his son understanding perfectly.

“Yes, papa.” Responds the young child, while picking up the shotgun and filling his shirt pockets with cartridges, buttoning them closed carefully.

“Come back at lunchtime.” The father adds.

He balances the shotgun in his hand, smiles at his father, kisses him on the head and leaves.

His father follows him a bit with his eyes and goes back to his daily chores, gleaming with joy over his young one.

He knows that his son, taught from the youngest age proper habit and precaution when dealing in danger, can handle a firearm and hunt whatever he wishes. Even though he is very tall for his age, he’s only thirteen. And judging by his pure blue eyes, still sparkling with infantile joy, he looks even younger.

The father doesn’t even have to raise his head from his chores to follow his son’s path: already across the reddened path and walking upright to the forest past the opening in the grass field.

In order to hunt in the forest—a game hunt—one needs more patience than his young son can muster. After crossing the island of trees, the boy will follow the line of cactuses towards the marshland, looking for doves, toucans, or any kind of heron, like those that his friend Juan had discovered a few days back.

Now alone, the father smirks recalling the passion for hunting that young children share. At times they would hunt a yacu-toro or—if lucky— a surucua and return triumphant. Juan to his ranch with his nine millimeter firearm that had been given to him, and his son to the plateau with his huge, sixteen caliber, white powder, four lock Saint-Etienne shotgun.

The father had been the same. At thirteen he would have given his life for a shotgun. His son, at the same age, now had one—; and his father smiled.

Nevertheless, it is not easy for a widowed father, who without any other faith or hope in life other than his son, to educate his son like he had been taught, free in his limited range of knowledge, confident in his tiny feet and hands since four years old, conscious of the immensity of certain dangers and the scarcity of his own strengths.

This father had fought hard against what he sees as his own selfishness. It’s so easy for a child to miscalculate, put a foot in an empty hole and one loses a son.

Danger can always linger for a man despite his age; but the threat diminished since at an early age he learned to count on nothing besides his own abilities.

This is how the father had raised his son. And to achieve it he had to resist not only his heart, but his moral torments as well; because this father, of weak stomach and poor eyesight, has for some time suffered from hallucinations.

He has seen, in painfully clear visions, memories of a happiness that should have remained in the void where he has locked himself. The image of his own son has not escaped his torment. He had once seen him rolling, covered in blood, from hammering a parabellum bullet in the vice in his workshop; he had felt this despite that his son was only polishing his belt buckle.

Horrible things…But today, with the burning summer day full of live, the love of which his son seems to have inherited, the father feels happy, calm and sure of the future.

In that moment, not far off, he hears a loud boom.

“The Saint Etienne” the father thinks recognizing the detonation. Two fewer doves in the forest.

Without paying any more attention to the menial event, the man distracts himself with his work.

The sun, already very high, continues to rise. Wherever one looks—rocks, earth, trees—, the air, congested like an oven, vibrates with heat. A deep humming sound fills the entire body and saturates the atmosphere for as far as the eyes can see, a time that harnesses all tropical life.

The father takes a look at his wristwatch: twelve. And lifts his eyes out over the forest.

His son should already be back. In the mutual trust that the two give to one another—the father of silvery sideburns and the child of thirteen—there were never any lies. When his son said, “yes, papa”, he did what he was told. He said he would be back before twelve, and the father had smiled watching him leave.

But he hasn’t come back.

The father returns to his chores, struggling to concentrate on his work. It’s so easy, so easy to lose track of time when inside the forest, sitting a bit on the ground while resting motionless.

Suddenly, the midday sun, the tropical humming, and the beating of father’s heart stop in rhythm at the thought: his son, motionless…

Time has passed; twelve thirty. The father leaves his workshop, and resting his hand on the metal bench, the explosion of a parabellum bullet rushes from the depth of his memory, and instantly, for the first time in the last three hours, realizes that he has not heard a sound after the blast if the Saint-Etienne. He has not heard gravel stirring under familiar steps. His son hasn’t returned, and nature stands guard at the edge of the forest, awaiting him.

Oh, how the calm character and young confidence of the boy’s education is not enough to scare away the fatal ghost that the hallucinating father sees rising from the edge of the forest. Distraction, forgetfulness, fortuitous tardiness: none of these minute motives that could have delayed the arrival of his son could fit into the father’s heart.

A shot, he had heard one single shot, and a long time ago at that. Since then the father has not heard a single noise, has not seen a single bird, not a single person has walked through the opening in the grass field to announce that at the wire fence…a great disaster.

Distracted and without a machete, the father sets out. He cuts through the grass field, enters into the forest, follows the line of cactus without finding the slightest trace of his son.

Nature continues to stand still. And when the father had gone over all of the familiar hunting paths and had explored the marshlands in vain, he knew with certainty that each step forward would bring him, relentlessly and brutally, to the body of his son.

He could only blame himself, poor thing. There was only the cold reality, terrible and consuming: his son had died crossing a…

But where, in what field? There are so many fences, and the forest is so, so, muddy. God, so muddy. If one is not careful crossing the fences with the shotgun in their hand…

The father’s shout is stifled. He saw something rise into the air, oh, no, no it’s not his son…He turns to one direction, then the other, then the other.

Nothing could be gained by seeing the complexion of the man’s skin and the anguish in his eyes. The father still hasn’t called out to his son. Even though his heart yearns to shout, his mouth remains shut. He knows well that the simple act of pronouncing his name, calling out to him loudly, would be a confession of his death.

“Chiquito” he let out quickly. And if the voice of a principled was capable of crying, we would cover our ears with compassion from the anguish in his voice.

No one nor nothing responded. Down the sun-reddened paths, the father, who has aged ten years by now, went searching for his newly-dead son.

“Hijito mio!”…”Chiquito mio”…he clamored to his son in diminutives that rose from the depths of his soul.

Once before, in the throngs of happiness and peace, this father suffered the hallucination of his son rolling on the ground, his head opened by a chrome nickel bullet. Now, in every shadowed corner of the forest, he sees sparkling wires, and at the base of a post, with the discharged shotgun as his side, he sees his son.

Even the forces that bring a father to hallucinate the most awful of nightmares have their limits. The father feels his senses leaving him when he quickly sees his son stepping out from a side path.

From fifty meters, it was enough for the boy of thirteen to see his father’s expression, without a machete and in the forest, to make him hurry his steps with his eyes wet.

“Son” the man murmured. Exhausted, the man drops himself into the bright white sand, his hands clasped around his son’s legs.

The young one, with his legs hugged tightly, stands up, and understanding the pain of his father, caresses his head slowly.

More time has passed. It’s already close to three. Now together, father and son undertake the walk back to the house.

“Why didn’t you use the sun to keep track of time?” The father says first.

“I did, papa…but when I was headed back I saw the garzas that Juan caught and went after them.

“What you put me through, son!”

“pia pia” the boy murmurs back.

After a long silence, the father asks,

“And the garzas, did you kill any?”

Considering everything, a minute detail. Under the red hot sky, passing through the grass field, the man returns to his house with his son, on whose shoulders, almost even with his father’s, he carries the joyful arm of his father. He returns covered in sweat, and even broken in body and spirit, smiles with joy…..

Yet he smiles a hallucinated happiness…For this father walks alone. He has encountered no one, his arm supported by nothing but air. Because behind him, at the foot of a post and with his legs raised, tangled in barbed-wire, his loved son lies face down to the sun, dead since ten that morning.

*This translation is taken from: quirogatranslated.