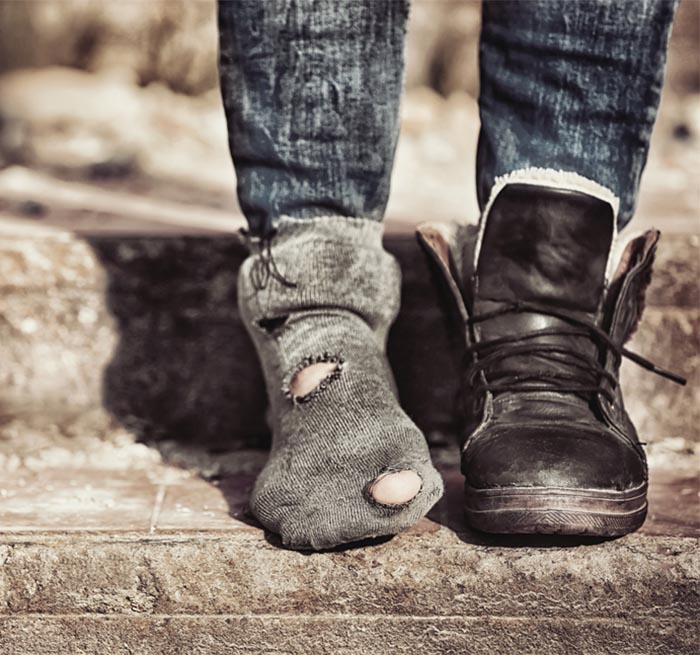 By means of the biography of a lost sock, Al-Asfar takes the reader to a multi-layered world where the sock provides perspective on one layer and captures its details and features before moving on to another. The sock leads multiple lives through the events of the story. In this reworking of an ancient narrative device – from the Golden Ass of Apollonius to the Memoirs of a Dinar by Doctor Dahesh ­– the sock is not just a sock, but made of flesh and blood into which al-Asfar breathes a soul. The sock experiences life as a sensitive human dogged by bad luck: he finds himself in the house of a poor newlywed couple where he is handled by hands gentle and cruel depending on who is doing the laundry. This symbolic story is well worth reflecting on, laden as it is with projections of the marginalized human who collects small tragedies like holes in a sock until they make up a major tragedy: loss of identity and self and being forced to become something else

I . . . am a cheap sock, I cost half a dinar. An industrial cooperative manufactured me, and my profit margin was redistributed among the elements of production. An ordinary man bought me, a manual worker quite poor. This worker married an ordinary young lady, and they lived together in a small apartment. They were very happy together.

The bride was very gentle with me, washing me every day in warm water. She did not hurt my skin with soap, nor burn me with washing soda, and to refresh me she hung me out on the balcony so the gentle Benghazi breeze would dry me.

I confided in the gusts of wind, recalling the vigorous effect of her fingertips that were dyed with henna. She scrubbed me slowly as if she were chewing gum with her polished teeth. I used to look at the skinny socks hanging up under the cupboard mirror by the front door.

One day the bride was unwell. Perhaps she was pregnant. The groom washed me in cold water – it was midwinter. All that rough scrubbing was physically painful. It almost frayed my threads. It almost ruined the elastic around my ribbed cuff. It was God’s will that I hid from him in the soap suds. When he put me on the line, he forgot to peg me, and the winds tossed me far away. I dropped into the yard of an elegant house. The wind blew me around the house from one place to another, as if it was revealing to me the difference between the flat and this grand palace. In one corner of the house there was a laundry room. Cautiously I went near it. There was a rumbling noise coming from inside. I watched with my back caught on the door handle. I saw the servant toss some articles of clothing into a metal vessel, connected by a quivering thread that hung from a box attached to the wall. This vessel that made the rumbling noise was not some narghileh that was not connected to a hose. I was afraid that the servant would see me, assume I was part of the family, and throw me in. Then I would whizz round and round with the other garments in that tomb. I got away from the room and approached the clothesline. I saw a coloured silk sock, hanging like a peacock, and held in place by a beautiful peg. I asked it in sock-language about the vessel that devoured clothes. At first, it did not understand me because I was not making myself clear on account of the small holes around my big toe . . . I repeated the question and it answered me in broken sock-language, “This is a washing machine, imported from overseas.”

I thanked him without smiling. I found it strange that there was no washing machine like it in the house of my owner, the bridegroom. I reckoned that this was because of its great expense. But I was happy that they did not have one. The clothes revolved in the washing-machine at the speed with which peace agreements are passed! I had been quite happy with being washed by ten human fingers with their beautiful smell, gentle touch, and slow scrub, and the sight of the cupboard by the front door where the shy skinny socks were stored – Oh what a lovely flat it was! I was delighted to cast my mind back to happy memories and then a spiral hose sprang at me, coiling itself like a snake seizing hold of everything: soil, dust, leaves and scraps of paper. I was violently swallowed up into its depths, and I found myself within its darkness. I took refuge with the leaf of a tree and kept myself away from the electric wires that were inside. I was happy because I was not damp and electrocuted.

In the evening they emptied the vacuum cleaner into a large rubbish bin that was by the secure steel door.

I spent the night in the body of that disgusting bin in which dirty rubbish with its awful stench was kept, and I sought comfort in memories of the smell of the bride and her kitchen and the sweat of factory workers, men and women, even the oil from machinery: those memories came to mind and defended me.

That morning the bridegroom’s holiday was over. Life went back to happy normality after the sugar rush of the honeymoon and the simple worker went back to his work as a dustman. The contents of the bin were emptied into the back of a dustcart. I was visible among the piles of garbage and he saw me. He smiled, picked me up gently, and put me in his pocket in spite of my filthiness. I was close to his heart – had I not witnessed his wedding night? After his shift, he took me back to the apartment and handed me to the bride: she recognised me and was delighted. She whooped with joy then made sure her husband was not under a spell. She brushed the dust off me, gave me a kiss, and put me on her hand as if I was a glove.