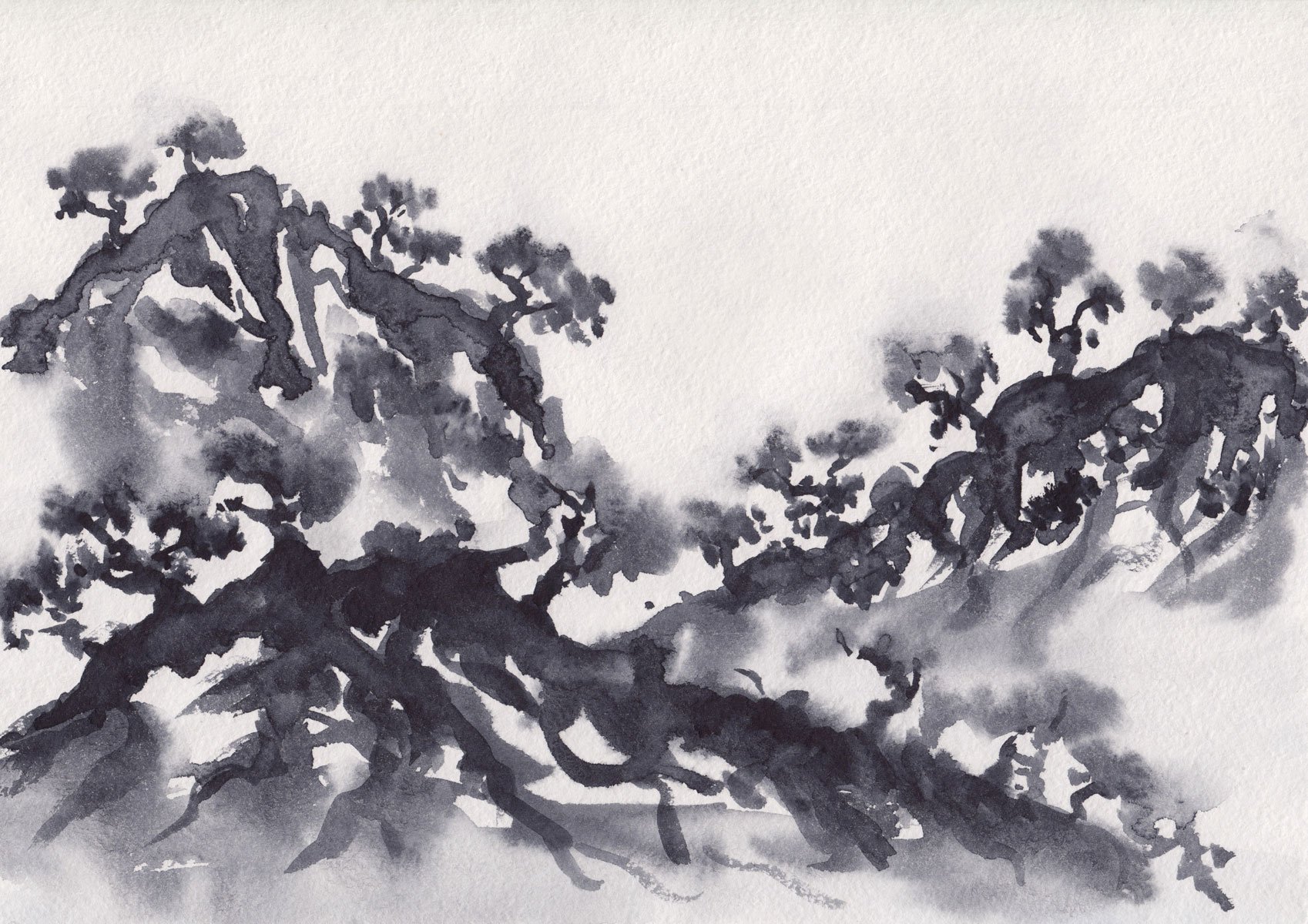 The original title of the story is Sennin, a word originally borrowed from Chinese (Mandarin xiānrén), written with characters suggesting a mountain hermit. An earlier combination, however, hints at one who, like Gonsuke, can fly into the heavens. The term originates in Daoism but also came to be used in a Buddhist sense, Buddhism itself having, in turn, influenced Daoism. One might translate the term sennin as “immortal,” but “wizard” is more inclusive. Moreover, it is more broadly cross-cultural, evoking various popular figures in Western culture, ranging from Merlin and Faust to Gandalf and Yoda. In the Edo period, Gonsuke was such a common male name that it became a quasi-generic term, roughly comparable today to Jeeves. In theory, Gonsuke belongs to the second highest social class: that of farmers, ranking below the samurai but above the artisans and the merchants. In fact, however, as is clear from the story, he is of lowly status and has no doubt fled hardship in the countryside to seek his fortune in the great commercial city of Ōsaka. Mention of Yodoya Tatsugorō tells us that the setting of the story is the 17th century. Yodoya was an extraordinarily rich merchant, whose extravagance led the shogunate in 1705 to confiscate his wealth and send him into exile. The Great Lord refers to Toyotomi Hideyoshi, who reunited Japan at the end of the 16th century.

Well now, esteemed readers, I am now in Ōsaka and shall therefore relate a local story.

Long ago there was a man who came to the city to seek a position as a menial. Ranking as he did among the kitchen help, he is known only by the generic name of Gonsuke.

Gonsuke passed through the entrance curtain of a servants’ registry agency and spoke to the head clerk, sitting atop the reception dais with a long-stemmed pipe in his mouth.

“Sir, I should very much like to become a wizard and so beseech you to place me with an employer suitable to that end.”

When the astonished clerk did not immediately reply, Gonsuke continued:

“Sir, have you not heard me? I wish to be sent out to become a wizard.”

“I am sorry to say, my good man,” replied the clerk at last, still puffing on his pipe, “that as we have no prior experience in mediating the apprenticeships of would-be wizards, I must humbly suggest that you look elsewhere.”

“Ah, but sir,” protested Gonsuke, looking most displeased, as he edged forward on the knees of his grey-blue trousers. “Is what you have said not contrary to what your esteemed establishment proclaims on its entrance curtain? ‘Introducing all manner of employment’…Is your claim valid? Or is it misleading and false?”

Gonsuke did indeed have reason to be angry.

“Oh no, what we say is quite true. If what you are seeking is a position whereby you may become wizard, I shall duly look into the matter this very day. Please return tomorrow to receive our reply.”

In this way the head clerk acceded to Gonsuke’s request, even as he sought to evade it. Yet how was he to know where he would send a man for such an apprenticeship or how anyone could be properly trained in such sorcery? Thus, as soon as Gonsuke was out of his sight, he set off to consult with a neighborhood physician.

“What then, Doctor?” he asked in a worried tone, having told him the story. “Where might we most easily send him for training as a wizard?”

The physician too must have been perplexed. For some time he sat with his arms crossed, merely staring at the pine tree in his garden. Listening in on it all was his cunning wife, whose nickname was appropriately the Old Vixen. And now she unhesitatingly intruded:

“Send him to us. Within two or three years in our care, he’ll surely be a wizard for all the world to see.”

“Ah, I am most happy to hear this and shall most gratefully entrust him to you. Intuition has somehow informed me of the karmic bond between physicians and aspiring wizards.

With ardent and repeated bows, the clerk in his ignorant bliss took his leave. The physician watched him go, then, still scowling, turned to his wife in exasperation:

“What utter nonsense! ” he chided her. “And what, pray tell, do you intend to do when in a few scant years this bumpkin complains that we have kept none of the promises you have now made to him?”

Far from accepting this rebuke, the woman scornfully replied:

“Hold your tongue! What chance would the likes of you, honest simpleton, have of keeping yourself fed in this merciless world of ours?”

And with that, she silenced him.

The next day, as promised, the head clerk returned, this time with the rustic Gonsuke, who was now attired in a crested half-coat—well aware, it would seem, that he was making his debut, though, in fact, none would have mistaken him for anything but a peasant. He was a strange sight indeed: The physician stared at him quite as though the man were a musky beast from the Indies.

“So you wish to become a wizard,” said the physician with a skeptical air. “Whatever was it that induced this ambition of yours?”

“Well now, I am not sure that know myself. But as I beheld Ōsaka Castle, it occurred to me that even the Great Lord who first built and occupied it was doomed to die. And so I was reminded that the pomp and glory of all human striving must pass away.”

“So you will do anything in order to become a wizard?”

“Yes indeed, I am prepared to do whatever is required.”

“Then from this very moment and for the next twenty years you will serve us. And then we shall reveal to you the wizard’s art.”

“Ah, then I am most truly and humbly grateful.”

“And in that entire score of years you shall receive not a single farthing in recompense.”

“Yes, yes. You have my compliance.”

And so for the following twenty years, Gonsuke served in the physician’s house. He drew water; he chopped wood. He cooked and he cleaned. Moreover, when the doctor made his rounds, it was Gonsuke who bore the medicine chest. Not once did he ask for wages, not even a single coin, and thus made himself a laborer more precious than one could find in all of Japan.

And now the decades passed. Once again clad in a crested half-coat, Gonsuke presented himself to his master and mistress and courteously expressed his thanks.

“And now I would beseech you to fulfill your oft-repeated promise and reveal to me how I might learn the wizard’s art and thereby gain immortality.”

The physician listened to Gonsuke in glum silence. Having worked the man for so long without payment, he dared not confess that he was presently no more possesed of knowledge concerning wizardry than he had been all those years before.

His reply was brusque and dismissive: “It is my wife who can teach you.”

For her part, she now spoke to him with ruthless self-assurance:

“I shall teach you the art of wizardry, but in exchange you must do whatever I command, however difficult the task I shall give you may be. Otherwise, you will not only be denied what you seek. You will also be obliged to perform twenty more years of labor for no wages, with death as your punishment should you fail to comply.”

“Please put me to my duty, however daunting!” replied the overjoyed Gonsuke, as he awaited her orders.

“Then climb the pine tree in the garden!”

Having herself no knowledge of wizardry, the wife no doubt thought that in forcing Gonsuke to do the impossible she could extract another twenty years of service from him. And yet hearing of his assignment, he immediately went forth to carry it out.

“Go on!” she called out to him, looking up at the pine from where she stood at the edge of the veranda. “Higher, higher!” Gonsuke’s half-coat was now fluttering at the very top of the large garden’s towering tree.

Gonsuke slowly and cautiously did as he was told, even as he kept his left hand tightly gripped to a thick bough.

“And now the other!”

But now the doctor had joined her on the veranda, exclaiming with a distraught look: “Stop, woman! If he releases both hands, the bumpkin will fall onto the rocks, and that will surely be the end of him.”

“This is not your turn on stage, my dear. Leave it to me…”

Gonsuke did not wait for her to finish calling out to him. Resolutely, he pulled his hand away. From there amidst the the topmost boughs there was no reason for him not to plunge to the ground. Instantly, Gonsuke and his half-coat were separated from the tree.

And yet, wondrously enough, he did not fall but, like a marionette being held by invisible strings, remained suspended there in the bright air of day.

“Thank you! Thank you!” Gonsuke called out. “At last, and all because of you, I have now indeed become a wizard!”

Bowing ever so deferentially, he gently trod the azure sky and rose into the clouds above.

The subsequent fate of the physician and his wife is quite unknown, though the pine tree in the garden endured for years thereafter. It is said that though the trunk alone was four armspans in circumference, Yodoya Tatsugorō went to the trouble of having it moved to his own garden, so that in winter he might gaze upon its snow-covered branches.