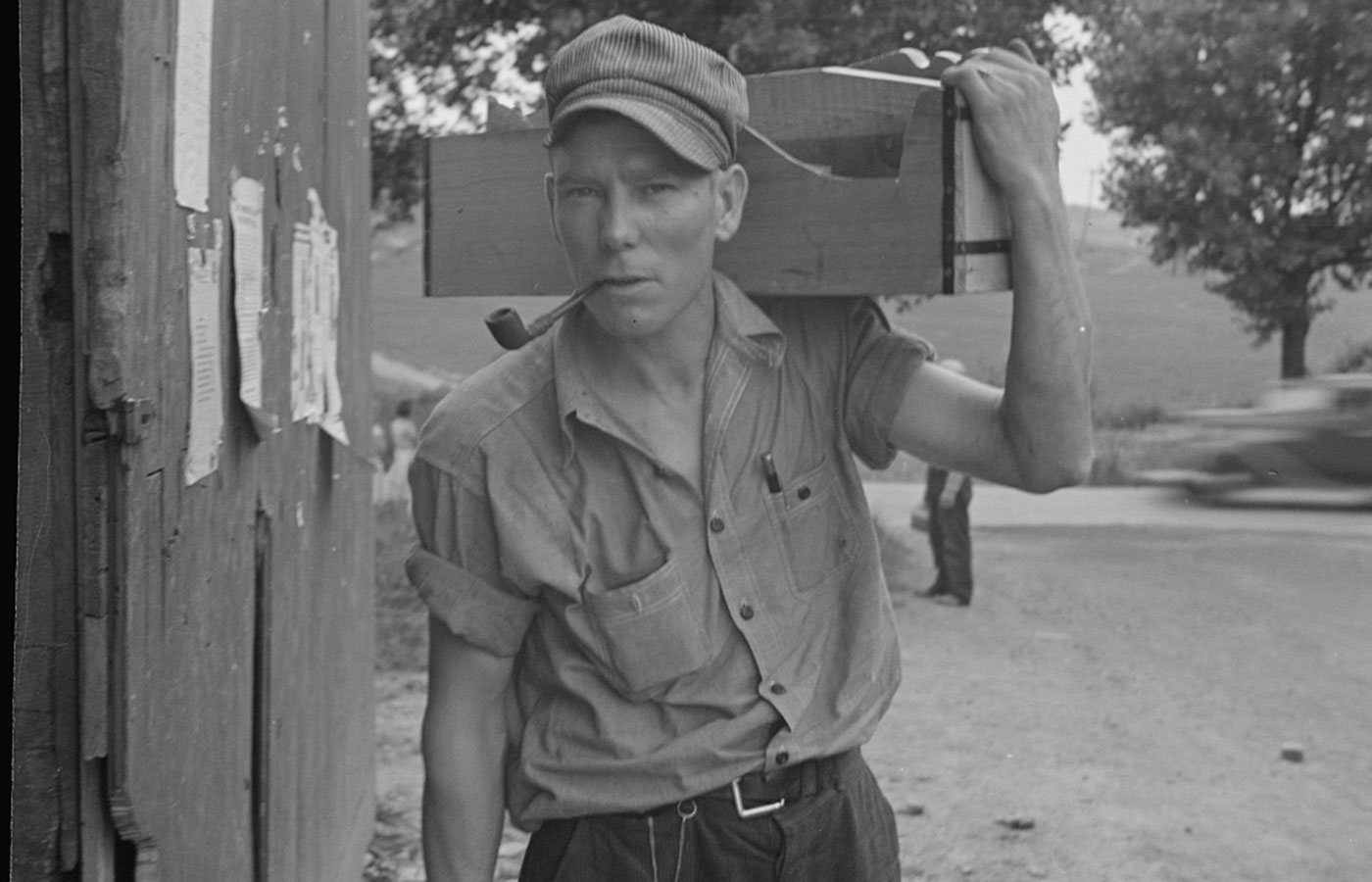 Mr. Weeks called me out again tonight, and I look back down the hall of my house. I left the kitchen light burning. This is an empty old house since the old lady died. When Mr. Weeks doesn’t call, I write everybody I know about my boy. Some of my letters always come back, and the folks who write back say nobody knows where he got off to. I can’t help but think he might come home at night when I am gone, so I let the kitchen light burn and go on out the door.

The cold air is the same, and the snow pellets my cap, sifts under my collar. I hear my hogs come grunting from their shed, thinking I have come to feed them. I ought to feed them better than that awful slop, but I can’t until I know my boy is safe. I told him not to go and look, that the hogs just squeal because I never kill them. They always squeal when they are happy, but he went and looked. Then he ran off someplace.

I brush the snow from my road plow’s windshield and climb in. The vinyl seats are cold, but I like them. They are smooth and easy cleaned. The lug wrench is where it has always been beside my seat. I heft it, put it back, I start the salt spreader, lower my shear, and head out to clean the mountain road.

The snow piles in a wall against the berm. No cars move. They are stranded at the side, and as I plow past them, a line falls in behind me, but they always drop back. They don’t know how long it takes the salt to work. They are common fools. They rush around in such weather and end up dead. They never sit still and wait for the salt to work.

I think I am getting too old to do this anymore. I wish I could rest and watch my hogs get old and die. When the last one is close to dying, I will feed him his best meal and leave the gate open. But that will most likely not happen, because I know this stretch of Route 60 from Ansted to Gauley, and I do a good job. Mr. Weeks always brags on what a good job I do, and when I meet the other truck plowing the uphill side of this road, I will honk. That will be Mr. Weeks coming up from Gauley. I think how I never met Mr. Weeks in my life but in a snowplow. Sometimes I look out to Sewel Mountain and see snow coming, then I call Mr. Weeks. But we are not friends. We don’t come around each other at all. I don’t even know if he’s got family.

I pass the rest stop at Hawks Nest, and a new batch of fools line up behind me, but pretty soon I am alone again. As I plow down the grade toward Chimney Corners, my lights are the only ones on the road, and the snow takes up the yellow spinning of my dome light and the white curves of my headlights. I smile at the pretties they make, but I am tired and wish I was home. I worry about the hogs. I should have given them more slop, but when the first one dies, the others will eat him quick enough.

I make the big turn at Chimney Corners and see a hitchhiker standing there. His front is clean, and he looks half frozen, so I stop to let him in.

“How far you going?”

“You got family there?” I say.

“I only go to Gauley Bridge, then I turn around.”

The fools pack up behind me, and my low gears whine away from them. Let them fall off the mountain for all I care.

“This is not good weather to be on the road” I say.

“Aw, buses stink,” he says. My boy always talked like that.

“Roanoke. Worked all year for a man. He give me Christmastime and a piece of change.”

“You bet. He’s got this farm outside of town — horses —  you ain’t seen such horses. He’s gonna let me work the horses next year.”

“I have a farm, but I only have some hogs left.”

“Hogs is good business,” he says.

I look at him. “You ever see a hog die?” I look back at the road snow.

“Hogs die hard. I seen people die in the war easier than a hog at a butchering.”

“Never noticed. We shot and stuck them pretty quick. They do right smart jerking around, but they’re dead by then”

“What can you do with a hog if you don’t butcher him? Sell him?”

“My hogs are old hogs. Not good for anything. I just been letting them die. I make my money on this piece of road every winter. Don’t need much.”

“My boy run off when my wife died. But that was considerable time ago.”

He is quiet a long time. Where the road is patched, I work my shear up, and go slower to let more salt hit behind. In my mirror, I see the lights of cars sneaking up behind me.

Then of a sudden the hitchhiker says, “What’s your boy do now?”

“He was learning a mason’s trade when he run off.”

“I don’t know. He was only a hod carrier then.”

He whistles. “I done that two weeks this summer. I never been so sore.”

“It’s hard work,” I say. I think, this boy has good muscles if he can carry hod.

I see the lights of Mr. Weeks’s snowplow coming toward us. I gear into first. I am not in a hurry. “Scrunch down,” I say. “I’d get in trouble for picking you up.”

The boy hunkers in the seat, and the lights from Mr. Weeks’s snowplow shine into my cab. I wave into the lights, not seeing Mr. Weeks, and we honk when we pass. Now I move closer to center. I want to do a good job and get all the snow, but when the line of cars behind Mr. Weeks comes toward me, I get fidgety. I don’t want to cause any accidents. The boy sits up and starts talking again, and it makes me jittery.

“I was kinda scared about coming through Fayette County,” he says.

“Damn, but a lot of hitchhikers gets killed up here.”

A man lays on his horn as he goes past, but I have to get what Mr. Weeks left, and I am always too close to center.

The boy says, “That soldier’s bones — Jesus, but that was creepy.”

The last car edges by, but my back and shoulders are shaking and I sweat.

“That soldier,” he says. “You know about that?”

“They found his duffel bag at the bottom of Lovers’ Leap. All his grip was in there, and his bones, too.”

“I remember. That was too bad.” The snow makes such nice pictures in my headlights, and it rests me to watch them.

“There was a big retard got killed up here, too. He was the only one they ever found with all his meat on. Rest of them, they just find their bones.”

“They haven’t found any in years,” I say. This snow makes me think of France. It was snowing like this when they dropped us over France. I yawn.

The hill bottoms out slowly, and we drive on to Gauley, clearing the stretch beside New River. The boy is smoking and taking in the snow.

“It snowed like this in France the winter of ‘forty-four,'” I say. “I was in the paratroops, and they dropped us where the Germans were thick. My platoon took a farmhouse without a shot.”

“Snapped their necks,” I say, and I see my man tumble into the sty. People die so easy.

We come to Gauley, where the road has already been cleared by the other trucks. I pull off, and the line of cars catches up, sloshing by. I grip the wrench.

“Look under the seat for my flashlight, boy.”

He bends forward, grabbing under the seat, and his head is turned from me. But I am way too tired now, and I don’t want to clean the seat.

“Well,” I say. I look at the lights of the cars. They are fools.

“Thanks again,” he says. He hops to the ground, and I watch him walking backward, thumbing. I am almost too tired to drive home. I sit and watch this boy walking backward until a car stops for him. I think, he is a polite boy, and lucky to get rides at night.

All the way up the mountain, I count the men in France, and I have to stop and count again. I never get any farther than that night it snowed, Mr. Weeks passes me and honks, but I don’t honk. Time and again, I try to count and can’t…

I pull up beside my house. My hogs run from their shelter in the backyard and grunt at me. I stand by my plow and look at the first rims of light around Sewel Mountain through the snowy limbs of the trees. Cars hiss by on the clean road. The kitchen light still burns, and I know the house is empty. My hogs stare at me, snort beside their trough. They are waiting for me to feed them, and I walk to their pen.

*This story is taken from: The Stories of Breece D’J Pancake, Little, Brown, 1983.