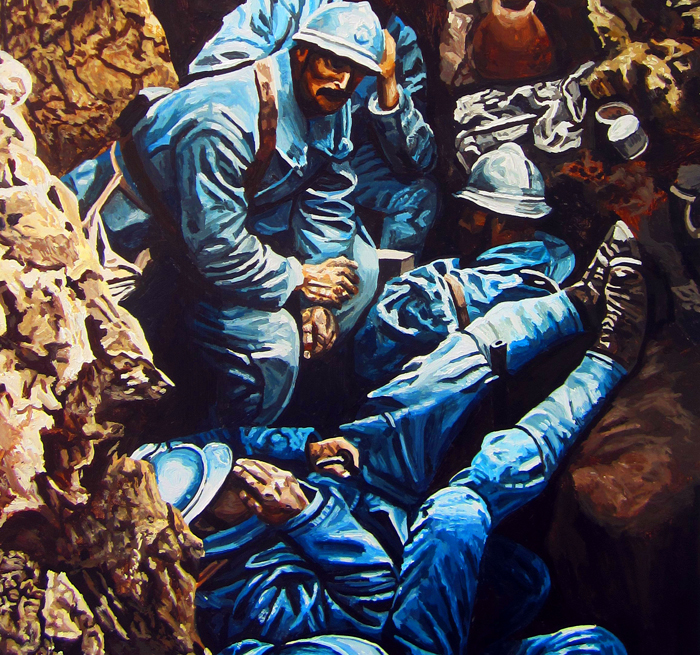 “What will we do now?” said the adjutant, troubled and excited.

The two officers looked down close to their toes where lay the body of their comrade. The face was chalk-blue; gleaming eyes stared at the sky. Over the two upright figures was a windy sound of bullets, and on the top of the hill Lean’s prostrate company of Spitzbergen infantry was firing measured volleys.

“Don’t you think it would be better–” began the adjutant. “We might leave him until tomorrow.”

“Of course,” said the adjutant, at once. “Your men got intrenching tools?”

Lean shouted back to his little line, and two men came slowly, one with a pick, one with a shovel. They started in the direction of the Rostina sharp-shooters. Bullets cracked near their ears. “Dig here,” said Lean gruffly. The men, thus caused to lower their glances to the turf, became hurried and frightened merely because they could not look to see whence the bullets came. The dull beat of the pick striking the earth sounded amid the swift snap of close bullets. Presently the other private began to shovel.

Lean nodded. Together in curious abstraction they looked at the body. Then Lean stirred his shoulders suddenly, arousing himself.

“Yes,” he said, “we’d better see what he’s got.” He dropped to his knees, and his hands approached the body of the dead officer. But his hands wavered over the buttons of the tunic. The first button was brick- red with drying blood, and he did not seem to dare touch it.

“Go on,” said the adjutant, hoarsely.

Lean stretched his wooden hand, and his fingers fumbled the blood- stained buttons. At last he rose with ghastly face. He had gathered a watch, a whistle, a pipe, a tobacco pouch, a handkerchief, a little case of cards and papers. He looked at the adjutant. There was a silence. The adjutant was feeling that he had been a coward to make Lean do all the grisly business.

“Well,” said Lean, “that’s all, I think. You have his sword and revolver?”

“Yes,” said the adjutant, his face working, and then he burst out in a sudden strange fury at the two privates. “Why don’t you hurry up with that grave? What are you doing, anyhow? Hurry, do you hear? I never saw such stupid–”

Even as he cried out in his passion the two men were laboring for their lives. Ever overhead the bullets were spitting.

The grave was finished, It was not a masterpiece–a poor little shallow thing. Lean and the adjutant again looked at each other in a curious silent communication.

Suddenly the adjutant croaked out a weird laugh. It was a terrible laugh, which had its origin in that part of the mind which is first moved by the singing of the nerves. “Well,” he said, humorously to Lean, “I suppose we had best tumble him in.”

“Yes,” said Lean. The two privates stood waiting, bent over their implements. “I suppose,” said Lean, “it would be better if we laid him in ourselves.”

“Yes,” said the adjutant. Then apparently remembering that he had made Lean search the body, he stooped with great fortitude and took hold of the dead officer’s clothing. Lean joined him. Both were particular that their fingers should not feel the corpse. They tugged away; the corpse lifted, heaved, toppled, flopped into the grave, and the two officers, straightening, looked again at each other–they were always looking at each other. They sighed with relief.

The adjutant said, “I suppose we should–we should say something. Do you know the service, Tim?”

“They don’t read the service until the grave is filled in,” said Lean, pressing his lips to an academic expression.

“Don’t they?” said the adjutant, shocked that he had made the mistake.

“Oh, well,” he cried, suddenly, “let us–let us say something–while he can hear us.”

“All right,” said Lean. “Do you know the service?”

“I can’t remember a line of it,” said the adjutant.

Lean was extremely dubious. “I can repeat two lines, but–”

“Well, do it,” said the adjutant. “Go as far as you can. That’s better than nothing. And the beasts have got our range exactly.”

Lean looked at his two men. “Attention,” he barked. The privates came to attention with a click, looking much aggrieved. The adjutant lowered his helmet to his knee. Lean, bareheaded, he stood over the grave. The Rostina sharpshooters fired briskly.

“Oh, Father, our friend has sunk in the deep waters of death, but his spirit has leaped toward Thee as the bubble arises from the lips of the drowning. Perceive, we beseech, O Father, the little flying bubble, and–”.

Lean, although husky and ashamed, had suffered no hesitation up to this point, but he stopped with a hopeless feeling and looked at the corpse.

The adjutant moved uneasily. “And from Thy superb heights–” he began, and then he too came to an end.

“And from Thy superb heights,” said Lean.

The adjutant suddenly remembered a phrase in the back part of the Spitzbergen burial service, and he exploited it with the triumphant manner of a man who has recalled everything, and can go on.

“Mercy,” said Lean. And then he was moved by some violence of feeling, for he turned suddenly upon his two men and tigerishly said, “Throw the dirt in.”

The fire of the Rostina sharpshooters was accurate and continuous.

One of the aggrieved privates came forward with his shovel. He lifted his first shovel-load of earth, and for a moment of inexplicable hesitation it was held poised above this corpse, which from its chalk- blue face looked keenly out from the grave. Then the soldier emptied his shovel on–on the feet.

The adjutant began to babble. “Well, of course–a man we’ve messed with all these years–impossible–you can’t, you know, leave your intimate friends rotting on the field. Go on, for God’s sake, and shovel, you!”

The man with the shovel suddenly ducked, grabbed his left arm with his right hand, and looked at his officer for orders. Lean picked the shovel from the ground. “Go to the rear,” he said to the wounded man. He also addressed the other private. “You get under cover, too; I’ll finish this business.”

The wounded man scrambled hard still for the top of the ridge without devoting any glances to the direction whence the bullets came, and the other man followed at an equal pace; but he was different, in that he looked back anxiously three times.

This is merely the way–often–of the hit and unhit.

Timothy Lean filled the shovel, hesitated, and then in a movement which was like a gesture of abhorrence he flung the dirt into the grave, and as it landed it made a sound–plop! Lean suddenly stopped and mopped his brow–a tired laborer.

“Perhaps we have been wrong,” said the adjutant. His glance wavered stupidly. “It might have been better if we hadn’t buried him just at this time. Of course, if we advance to-morrow the body would have been–”

“Damn you,” said Lean, “shut your mouth!” He was not the senior officer.

He again filled the shovel and flung the earth. Always the earth made that sound–plop! For a space Lean worked frantically, like a man digging himself out of danger.

Soon there was nothing to be seen but the chalk-blue face. Lean filled the shovel. “Good God,” he cried to the adjutant. “Why didn’t you turn him somehow when you put him in? This–” Then Lean began to stutter.

The adjutant understood. He was pale to the lips. “Go on, man,” he cried, beseechingly, almost in a shout. Lean swung back the shovel. It went forward in a pendulum curve. When the earth landed it made a sound – plop!