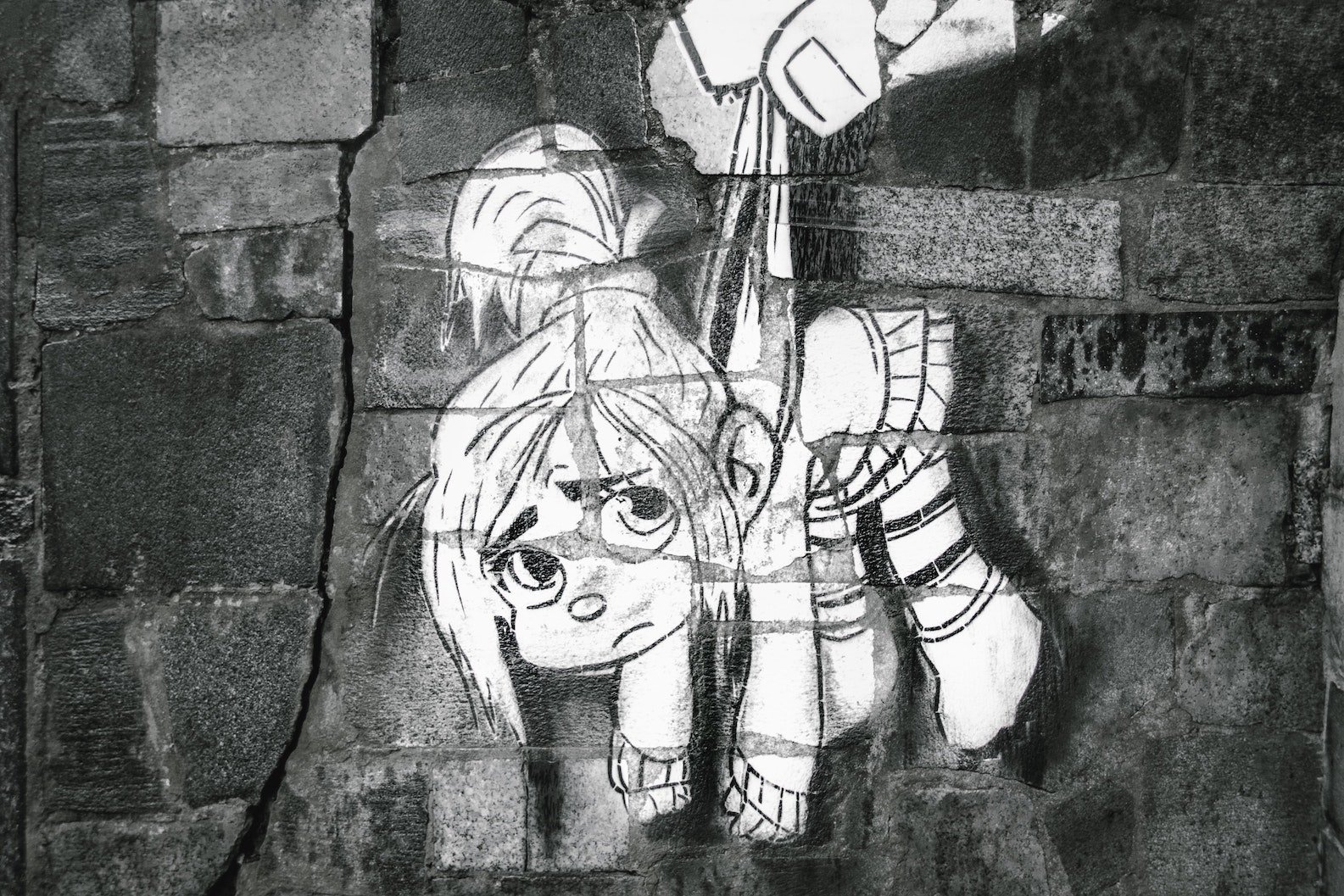 It was the talk of the town. What a miracle! It’s not every day that a man in his eighties goes to the altar with a fifteen year old.

To be precise, Inesiña, the niece of the parish priest of Gondelle, was fifteen years and two months old when her own uncle blessed her marriage (in the church of Nuestra Señora del Plomo, three leagues away from Vilamorta) to Don Fortunato Gayoso, who was eighty-three and a half years old, according to his certificate of baptism. Inesiña’s only stipulation was that they had to get married in that church. She was a devotee of that particular Virgin and always wore the symbol designated for her followers, a pendant of white flannel and blue silk. And since the bridegroom wasn’t able walk to up the steep hill leading to the church from the Cebre to Vilamorta road (how was he ever going to, poor wretch?), and as he couldn’t sit on a horse either, they came up with the idea of hiring two strapping lads from Gondelle, who were used to carrying enormous baskets full of grapes at harvest time, to carry Don Fortunato up to the chapel between them on a four hand seat. What a laugh!

However, in the casinos and the chemist shops and, let’s say, other social circles in Vilamorta and Cebre, and in the atriums and sacristies of all the parish churches, everyone agreed that Inesiña’s uncle had made a wise choice and landed Inesiña with a prize catch. After all, who was Inesiña? A bright young thing, full of life, with sparkling eyes and rosy cheeks, but what the devil, there were plenty like her in every village in the district! On the other hand, there was nobody in the whole province as wealthy as Don Fortunato. Whether they were ill gotten gains or honestly obtained (because when people come back from the New World with so much money, God only knows what story is hidden inside a locked suitcase) it’s just, well, who’s going to investigate the origin of such a huge fortune? Huge fortunes are like sunny days: just enjoy them and don’t ask where they came from.

The fact that Sr Gayoso had brought back an enormous sum was confirmed by genuine and reliable sources: in the local branch of Banco de Auriabella alone he had left almost two million reales on deposit, waiting for the right investment (note that in Cebre and Vilamorta the locals still count in reales). Whenever there was a plot of land for sale, Gayoso would snap it up without haggling over the price, and he had acquired a group of three houses in the Plaza de la Constitución in Vilamorta, no less, knocking them down and putting up a sumptuous new building on the site. ‘That crotchety old dodger doesn’t need more than six feet of land!’ the regulars at the Casino used to say, half joking and half indignant. Imagine what they would add as the extraordinary news of the wedding spread, and when they discovered that Don Fortunato had not only given the priest’s niece a magnificent sum as a wedding gift, but he’d also made her his sole heir and beneficiary. The rich man’s relatives (some of them close, some less so) howled to the heavens; there was talk of lawsuits, senile dementia, locking him up in the lunatic asylum. But since Don Fortunato still had all his faculties and could reason and manage his affairs perfectly well, even if he was past his prime and looked like a shrivelled-up raisin, they had to let him be, trusting that his punishment would be the product of his own folly.

What couldn’t be avoided was the ear-splitting racket traditionally made on such occasions with pots and pans. The newlyweds repaired to their new house, which had been decorated and furnished with no expense spared, while more than five hundred of the great unwashed gathered outside, armed with frying pans, stew pots, trivets, tin cans, horns and whistles. Anyone who wanted to could make a deafening din and nobody could tell them where to draw the line. Not a window opened in the entire building, not a chink of light could be seen through any gap. Tired and disillusioned, the revellers retired to their own beds too. Even though they had intended make a racket for the entire week, by the day after the wedding they had all given up and they left the couple in peace, alone in their house in the Plaza.

In the meantime, there inside the beautiful mansion, crammed full of expensive furniture and all the creature comforts anyone could desire or bestow, the bride thought she was dreaming. She almost felt like dancing for joy, all by herself. The fear she had harboured as she approached the altar in the church of Nuestra Señora del Plomo, instinctive rather than rational, had melted away when confronted with the gentle and paternalistic reasoning of her elderly husband, who only asked of his tender wife a little care and warmth, which are the constant concerns and demands of extreme old age. Now Inesiña understood the repeated reassurances of her uncle, the parish priest of Gondelle, who had told her, “Don’t be afraid, you silly thing” and “Don’t worry about it, just marry him.” Her role was to be kind and to be a nurse and daughter. She would need to perform this role for a time, perhaps for a very short time. The proof that she would remain a maiden were the two enormous dolls, dressed in silk and lace, which she found in her boudoir, their silly faces looking very serious, sitting there on the satin couch. One couldn’t conceive, either awake or in one’s dreams, that anyone could enter that room, other than those two dolls made of fine porcelain.

Care for the little old man! Now that’s something Inés would be more than happy to do, day and night (mostly at night, because that’s when he needed her beside him, pressing against his body like a soft overcoat) and she agreed to look after him, not to leave his side for even one minute. Poor man! He was so kind and he already had one foot in the grave! Inesiña’s heart was moved; she hadn’t known her own father so she supposed that God was providing one for her now. She would behave like a daughter; more than a daughter, because daughters don’t give such intimate care, they don’t offer their youthful warmth, the snug radiance of their own bodies; and that was precisely how Don Fortunato believed he would find some cure for his decrepitude. ‘My problem is that I’m cold,’ he would say. ‘Very cold, my dear. It’s as if all the snow has accumulated over the years and frozen in my veins. I sought you out like a man seeks the sun and now I’ll cling to you like I’d cling to a cosy fire in mid-winter. Come close, take me in your arms, otherwise I’ll shiver and end up frozen straight away. For God’s sake, keep me warm, that’s all I ask of you.’

What the old man did not mention, what he kept as a secret between himself and the Englishman, a specialist healer that he’d consulted as a last resort, was the conviction that if he brought his ancient body into contact with Inesiña’s fresh youthfulness, it would bring about a mysterious exchange. While the young girl’s vital energy, her vigour, her untapped reserves of strength, would reanimate Don Fortunato, his decrepitude and exhaustion would be passed on to her, transmitted by the mingling and exchange of their breath, the old man capturing an aura which was vivacious, ardent and pure, and the young girl absorbing a sepulchral breath. Gayoso knew that Inesiña was the victim, the lamb brought to the slaughterhouse, and with the ferocious self-interest of one’s final years of existence, in which everything is sacrificed in the desire to prolong it, if only for one year, he didn’t feel the slightest flicker of compassion. He would grab hold of Inés, absorbing her healthy, delightful, perfumed breath, captured in the vessel enclosed by her white teeth. This was the rich, expensive post-prandial liqueur which he bought and consumed to sustain himself, and if he had thought that making an incision in the girl’s neck and sucking her blood direct from her veins would rejuvenate him, he would have been capable of doing so. Hadn’t he paid his money? So Inés belonged to him.

The residents of Vilamorta were astonished (even more than they had been by the wedding) when they noticed that Don Fortunato, who they had predicted would last no more than eight days, started to show signs of improvement, even looking younger. He started going for short walks, first leaning on his wife’s arm, then on a stick, each step firmer than the last, his legs less shaky. After two or three months of marriage he started going to the casino and after six months, miraculously, he played a game of billiards, taking off his frock coat, a man once more! It was as if his skin had been renewed, injected with vital juices; he lost the deep wrinkles from his cheeks, he held his head upright, his eyes were not the same dead eyes sinking into his skull. And Vilamorta’s doctor, the famous Dr. Tropiezo, said with a kind of comic horror: ‘Well blow me down if he doesn’t live to be a hundred, like the ones you read about in the papers.’

It was Dr. Tropiezo himself who had to care for Inesiña during her long, slow illness, from which she died (the poor young lass) before she reached the age of twenty. Consumption, tubercular fever, an affliction which expressed in the most striking way the devastation of an organism which had given its resources to another. The priest’s niece did not go short of a decent burial and a fine mausoleum. But Don Fortunato is on the lookout for a new bride. This time, either he’ll have to leave town, or the rowdy mob with their pots and pans will end up burning down the house, dragging him outside and beating him to death.

The story is now added to your reading wish list. All the stories you want to read are waiting for you in your new personal area
try it
4
Charles Dickens