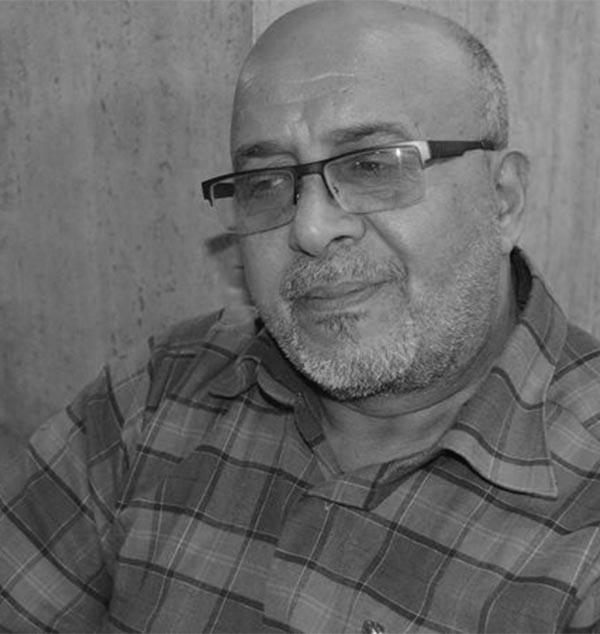 Muhammad al-Asfar was born in 1960 in the Libyan town of Khoms and grew up in Benghazi. He worked in elementary and middle schools. From teaching, he moved on to become a footballer and then a traveling salesman working between Morocco, Turkey, Syria, China, Thailand, Tunisia, Malta, Egypt, and Libya. Al-Asfar’s career as a writer began in 1999 and he entered the literary world when he published his first text, “From the Diaries of a Tree”, in the official Libyan newspaper Al-Jamahiriya. He wrote for the Libyan and Arab cultural press and most Libyan publications as well as Doha magazine, Al Jazeera Net, and newspapers such as Akhbar al-Adab, al-Nahar, al-Hayat, al-Akhbar, al-Arab, al-Quds al-Arabi, and al-Arabi al-Jadid, as well as the Dutch Huna Sotak, the German Fikrun wa Fann, the New York Times, and on literary websites. His novels and short story collections have been published by Al-Intishar Al-Arabi in Beirut, Dar Al-Hiwar in Syria, Dar Libya for Publication, and Dar al-Houssam in Egypt.

The writer has several works in press with Arab publishers in Tunisia, Jordan, and Milan, and some of my works have been translated into English, Spanish, and French. “Story of a Sock”, a short story was turned into a short film and won the creativity prize at the 2013 Cairo Short Film Festival. He lives in Germany as a result of the ongoing conflict in Libya.

Stories by this
Author
3
Muhammad al-Asfar