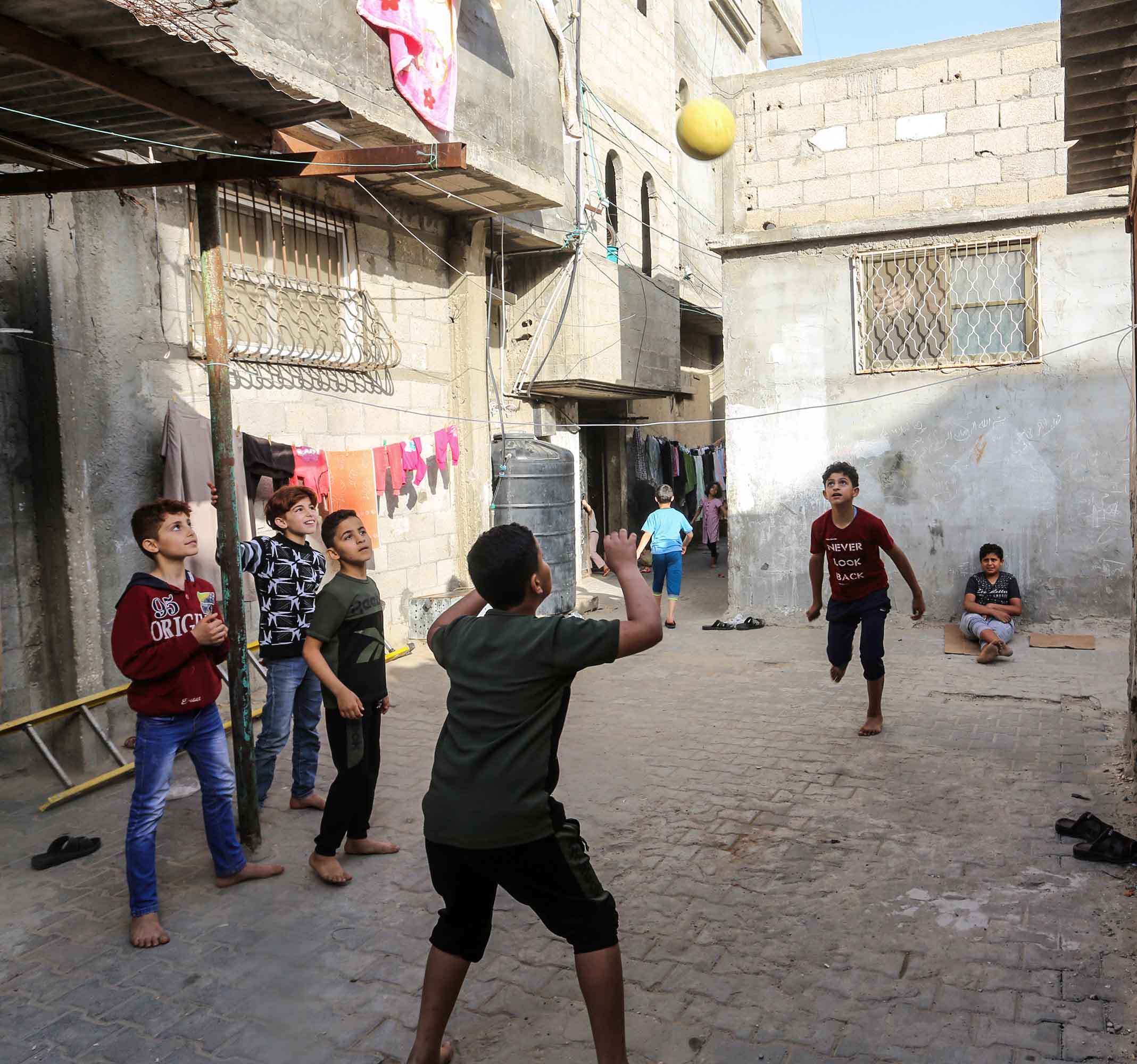 I grew up having the idea of abnormality as what is normal, and that those persons who inflict fear whenever and wherever they go are not of our own.

When I opened my eyes to the world, I thought that young men and teenagers running away from the soldiers were playing hide and seek or practicing their hobby of playing catch.

With the passing of days, weeks, months and possibly years, I began to understand that those men with weapons are the enemy, the occupation, and the ones who only seek to kill.

The first time I was very close to them was when I was with my mother walking down the main street on the way to the market. I was three years old.

The vehicles came from far away and the people started to run.

My mother suddenly pulled me closer to her, carried me and held me close while looking at the three military jeeps as they were passing.

I felt her heartbeats while she was hugging me. As she released me, I felt a wash of loose-limbed relief followed by a flush of confusion.

That moment, I knew that something was wrong. She never took me to the market again with her.

The first game I played with my peers in the neighbourhood was called “Jews and Arabs”.  The first few times, I did not reject the idea of being the Jew, which here means the army, “Al Jaish”.

One day, we gathered in the neighbourhood to play the same game when I was four, and as the youngest in the group, they decided I will be the “Jaish”

– “No, we are Arabs, you are a Jew, you’re with them” one of the older children pointed out to the group.

I was not happy with that and I said

I felt angered and stormed away, then sat on one of the cement blocks near the wall of our neighbours watching them play. The Arabs were throwing stones and insulting the “Jews”, while the boys role-playing the soldiers were imitating shooting at them, making sounds with their lips.  After we finished playing, we used to set a checkpoint from rocks and tree branches, forcing vehicles to slow down, while holding our wooden sticks, simulating guns.

Drivers would treat us differently. Some of them would praise us saying “Heroes” adding a bit of joy by showing his ID to us. Sometimes, we end up with hard-headed ones who would start insulting us, from far away, hence announcing the end of the game.

A day my eyes caught a newspaper someone threw in the street. I have always had a passion to look at the pictures in the newspapers. I slowly moved towards it with my bare feet covered with dust from running and walking in the street, picked them up and took them to the side of the street, sitting on the entrance of our home. I started to flip the pages of the newspaper, one after one, imitating my father when he reads the newspaper, but I was only looking at the pictures. Suddenly, my eyes locked at a page full of pictures. They were coloured images. The pictures had crying women, bodies, blood, children dead and soldiers with guns.

I found myself kneeling, getting closer to the newspaper, squinting my eyes, trying to examine the bodies of the children.

“Why didn’t they shout”, that voice ringed in my ears. Later, after many years, I learned that the voice of children cannot be heard in big massacres, only the sound of bullets and guns.

I spent more than half an hour examining the pictures. One by One. I was seized with rage, suddenly, carried the newspaper and went to my older sister.

-“Throw that garbage out”, my mother shouted from far away, referring to the newspaper.

-“Your dad will get you new ones tomorrow”, she said

I did not listen to her, opened the page where the pictures were, and asked my older sister:

She looked at me, and then looked at the newspaper and read a bit, then told me “the Army”, Al Jaish.

She paused a little, and then said, “Because they are like us, Palestinians”.

-“No, this is in Lebanon, Sabra and Shatila, it happened a long time ago” raising her hand to her face level and making movements to the back, saying, “Zamaaaaan, Zamaaan”, meaning it was a long time ago, in a way to calm me down and diffuse my fears.

Perhaps she saw that my words were showing deep fear.

Since that moment, Sabra and Shatila never left my mind and I never forgot the massacre. As any child would never forget the first time they hop on the ship, I have never forgotten the first time I picked up a newspaper and was welcomed with such a brutal beginning.

Since that day, I became very attached to newspapers. One day, my father found me collecting newspapers in the street trying to look at the pictures.

-He said to me, “Okay. I will bring you new ones, tomorrow”, ordering me to go inside.

Later that week, I found a treasure. It was in my brother’s room, under the mattress of one of the king-sized beds at home.

There were around ten coloured magazines. The name of the magazine was “Abir” and it was a nationalist magazine and had a lot of coloured pictures of “Fidayeen” and “Moutaradeen”, i.e. Resistance fighters and wanted fighters. I spent many days, waking up, picking up one magazine and constantly looking at the pictures without being able to read one line.

That week, my father started to bring me Al-Quds Newspaper every day, after his work. He bought it daily until he retired. I used to wait for him every day when he comes back from work. Once he makes an appearance in the street, I run towards him barefoot, taking whatever, he was carrying, fruits or vegetables, and the newspaper.

One of my older sisters, who used to read the newspapers, used to take it from me, giving me the cultural and sports annexes until she finishes reading the newspaper. They had more photos, and I was satisfied.  When the Palestinian Liberation Organization returned to Palestine, two more newspapers were added to Al-Quds, “al-Hayah”, and “al-Ayyam”. My three older sisters and I used to compete who will read them first.

When I became older, I tried to imagine my childhood without the newspapers, without the magazines, without the pictures, without the words and the smell of the papers. Without them, the world would have collapsed. It would have been more chaotic. For me, newspapers, and pictures were the world that takes me from playing “Jews and Arabs”. They were my daily struggle to renew my world and ask delayed questions that I have been answering until now after more than thirty years.