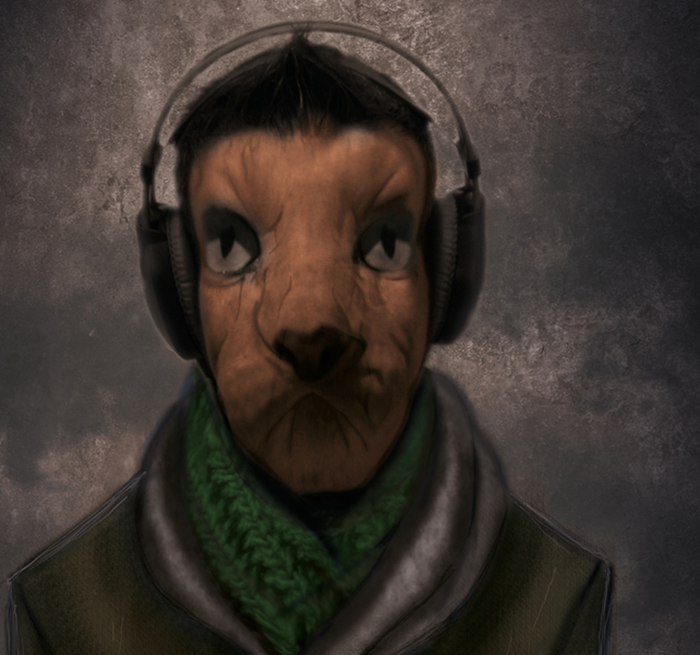 The alien wasn’t green and had no antennas on his head. He looked ordinary except that he was about a quarter size. In fact, with his gray clipped mustache and his gloomy countenance he reminded me of Tzuberi, my late father’s accountant, and his expression was just like that of Tzuberi when father would bring him his packet of invoices, hanging his perplexed eyes on him and saying, what will you do with all these? Tzuberi had many clients, taxi drivers, shop owners, building contractors, absolutely practical people, none of them except father would ask him such questions. The alien was wearing a kind of a gray gown and appeared as though he had always been standing there on the cupshelf, breathing – if that was what he was doing – since from time to time he would swell and inflate and immediately shrink back. Lissy called me in the morning, Dad come see, but since her tone was so quiet I calmly finished my morning things and only then went down to the kitchen and we stood there the three of us – Lissy, me and Glenda the cat – and looked at him inquisitively. Lissy tried to speak to him– first in Hebrew, than in English, and finally in Arabic, which she had started learning on the internet – but the alien didn’t answer and didn’t even change its posture, just continued to stand and stare blankly, and from time to time to expand and shrink back. Even Glenda from her seat on the kitchen table by the sink looked at him disinterestedly and continued to lick her magnificent mustaches. What shall we do? I asked Lissy, I have to be early today at the clinic, I have a really full day, and Lissy said I have zero time, I have to run, took her backpack, phone, and earphones, and ran out to the schoolbus. I too had no choice, left Glenda her meal, locked the house got in the car and drove away

In the clinic the first two patients were already waiting and from the dental assistant’s room rose the screeching of the cleaning instrument. I really had a long full day ahead of me, what with Tilly who had said she would come by around mid-day and the two hours I had cleared off for us, in the afternoon I had two complex root-canals and one preparation for an implant and a visit by the vice chair of the ethics committee to discuss the coming elections to the review board of the association so that when I returned home towards eight, hungry and tired and remembering nothing from the morning events, I was surprised to see Lissy sitting and watching “Home and Moss”, the new Finish series, Mr. Alien sitting on her lap as though this was his destiny and Glenda napping by the fireside as usual. What’s this supposed to mean, I asked Lissy, what’s going on here? But Lissy hardly looked at me, It’s alright, Dad, she said, nothing to worry about. The alien laid in her lap stiff like a stick but without doubt watching TV with her. Maybe we should notify someone, maybe do something, perhaps it has diseases? Stop it, Dad, you’re such a weirdo, said Lissy and started punching vigorously at her phone. Maybe he needs to eat something? Please Dad, said Lissy again and the alien inflated even more and seemed reddened, almost angry. Well, I said, OK, I didn’t mean it. I stood a while longer watching them and went back to the kitchen, to eat and read the morning’s paper. When I was done I went back to the living room. What will you do with him at night? I asked Lissy, and she said I don’t know Dad, why do you worry so much. Do you have exams this week? Yes, Cinema and Chemistry, I’ll go tomorrow to study with Sivan. OK, I’m off, I said, Goodnight, said Lissy. The alien and the cat said nothing.

We live in an old rented house in the outskirts of Nes-Ziyona. The house is a bit big for two people but it is convenient and we have lived there for so long that we have gotten used to it. On the first floor there are two bedrooms, one for Lissy and the other is empty (except when we have guests), a nice living room with a porch overlooking faraway hills, and of course the kitchen; upstairs my bedroom and office room. After Lissy’s mother left us when Lissy was a little girl, I was in a hurry to find us a new place so as not to stay in the old apartment with all the memories, and this house in a quiet neighborhood fit me perfectly. My clinic, on the other hand, is in the town center, on the twelfth floor of a busy tower with shops, offices, and apartments, people coming and going all day long, elevators, noise from morning till night. Besides me in the clinic are Erdwina the dental hygienist; Natti the implant specialist comes twice a week; and of course Rachel the secretary whom I detest with all my heart: first because she is old, stupid, and ugly; and second because she’s a star for frightening clients away – with her rude speech and overall incompetence. At least once a month I vow to fire her but when I get to the clinic and stand before her shaggy form – tangled gray curls stiff as steel wool and her wrinkled face wearing an empty gravely expression – my decisiveness melts and I retreat, defeated, into the treatment room, before she starts telling me again with her voice, hoarse from so much smoking, all the wonders of her genius son who apparently is pushing papers in some bank in Wall Street, but who has not yet come by to see his mom since I opened this clinic.

Usually Lissy gets up first and when I come down she’s already in the kitchen poking at her phone, but this morning the house was quiet. I went down to the silent rooms and treaded carefully through the corridor towards her room to see if she needed to be woken up. The door was open, and when I stepped in I saw the bed all disheveled, and on it was Lissy, perfectly naked, lying on her belly, her lovely amber mane encircling her head and flowing over her right shoulder with her arm extending from it to rest under her head, the other arm under her belly, the gorgeous back, adorned with spinal beads like a necklace, the splendid cheeks of her behind, the young, luxurious, golden skin, radiant from overflowing youth and health, the strong legs, one straight and the other folded under her, the dark spot between them, all this image was as striking, wonderful, and breathtaking as though it had come from Modigliani’s hand, oh God how could a father stand like that and admire his daughter’s naked body, but oh horror, next to her, on the pillow, all covered with a blanket except for the tip of his gray head was the loathsome alien, a bitter wave of regret swelled in me, look what happened, look what you did, why didn’t you do anything, why didn’t you respond, how can you be so inert, are you mentally ill, why didn’t you kick him out or call the authorities or do something, just like Lissy’s mother told you ten years ago when she left, I can’t stand it anymore your apathy, the taxi stood outside waiting with the few suitcases she took, I can’t take it any more she said and got into the cab and since then we’ve never seen her again.

I went back to the kitchen to grind coffee, make noise, and indeed after a few minutes Lissy showed up, all happy and radiant, her hair beautifully knotted and her eyes shining and she said Pappy can you take me to school today I missed the bus. We drank the coffee and she chewed some cornflakes and we went out to the car. Outside it was a bit rainy, we drove through the old pleasant neighborhood, it was a lovely mild winter day with some rain and some clouds and some sun, on the fences around the houses the bushes were flaming with orange flowers, left the sleepy streets and passed into the busy part of town, crossing with difficulty the main road through heavy traffic full of trucks and buses, passed the ugly shopping mall, towards the other, new side of town where wide empty boulevards had been recently laid connected by flowering traffic circles, up to the feet of the sandy hills where her highschool is, and dropped her off to mix with the hundreds of young boys and girls crowding the schoolyard, sparkling like soda bubbles in a soda bottle, waved goodbye and turned to drive back home.

What shall I do now, I thought, what should I do, what can I do. I drove back again through the wide empty boulevards, circled the flowering traffic circles, passed back through the town center with its ugly shopping mall, crossed the busy main road, returned to the old part of town, between the small houses and the flowering fences, a useful idea did not cross my mind, only blind futile anger and humiliation, I parked and ran up the three steps to the house, we have an excellent front door but we always come in through the kitchen, I turned the lock and opened the door boldly with a clear intent of doing something decisive but as yet undetermined.

But when I opened the door the alien was already lying there on the floor, or more accurately what was left of him, bitten and torn to pieces in a pool of blood, and next to him proudly sat Glenda, licking her magnificent mustaches with satisfaction.