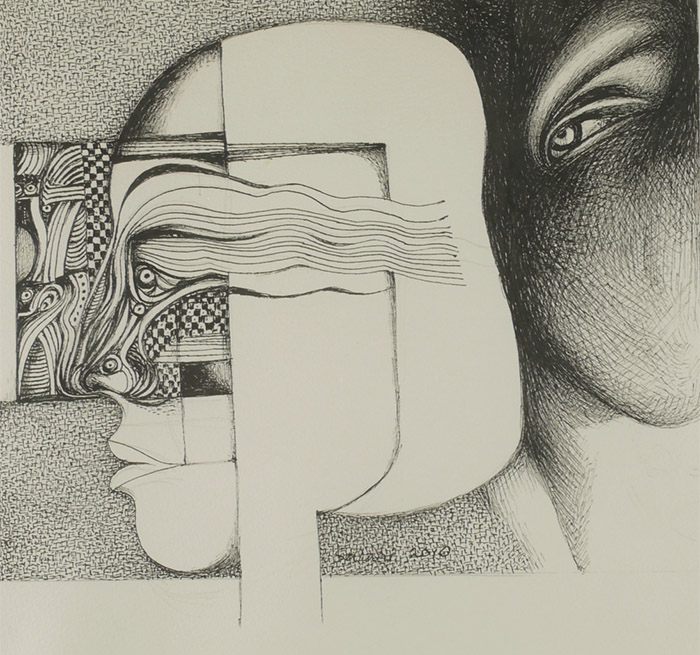 It was her panting that drew me over. I was exhausted, as the new work regime had been sucking every last drop of life out of us. But my misreading of the situation (what with the cries, groans, and stifled moans) put some life back into me, and I shot over to her like an arrow.

She was alone under a palm tree in front of an abandoned shop and surrounded by her filth. Even though it was pitch dark in the alleyway, a shaft of light coming from a lamp on the main street illuminated her sufficiently for me to see her dust-covered face, its petite muscles drawn taut, and the redness of her eyes as they alternately narrowed and widened in a painful, mechanical sort of way as though, in her loneliness and gloom, she was crying out for pity to the demons of darkness. My gaze slid down to her hands, which she was pressing against a swollen belly beneath threadbare garments. When she saw me, she went quiet all of a sudden, gazing at me with steady eyes, and with a face as cold and expressionless as a mummy from the age of the Pharaohs.

Then, in utter innocence, she said, “Can you deliver the baby…? It’s going to split me in half. I’ll die if you don’t!”

Without thinking I asked, “Why don’t you go to hospital?”

She gave a dark, heavy smile. “I can’t walk, and I don’t have the taxi fare. Besides, I wouldn’t be able to pay the hospital. Everything costs money.”

She let out a faint meow and then passed out, babbling like a drunkard. I didn’t know what to do. All I had with me was five pounds for the bus ride home, and it was ten-thirty—just half an hour before curfew. I was so worn out from sweeping and mopping the cinema, I wouldn’t be able to pick her up and carry her on my back. And even if I did, the hospital wouldn’t admit her. After all, there isn’t a hospital in this country that would treat somebody out of the goodness of its heart.

A voice whispered inside me. I couldn’t tell if it was the voice of an angel or a demon.

“What’s with you?” it said. “Her Lord and Maker can find her a way out. Just take care of yourself now. Curfew’s in half an hour. So, hurry up and catch the last bus. Then come back tomorrow morning, and you’ll find that she gave birth to a big cockroach. It’ll be sitting next to her checking out the world with its antennae and its beady eyes.”

Then I had an idea: to try carrying her to the sidewalk along the main street. A patrol might find her and take her to the cells, then bring her a midwife or a doctor who’s paid by the government.

But before I could do it, the curfew patrol took us both away.

The doctor might have been right in part. She was dirty, filthy even. She reeked of the discharge caused by a sexually transmitted disease, and the stench was piercing, unbearable. So the doctor instructed the cleaning lady to remove her pubic hair with its crabs, foul odor, and rank secretions, wash the area thoroughly with warm water and carbolic soap, and apply Dettol.

Then he went to the sink and vomited up everything in his gut, cursing the day he’d decided to study medicine, gynecology, and obstetrics.

“Help me, please,” the cleaning lady said to me.

“Die, then! Die!” the cleaning lady lit into her furiously. “Make it easy on us and on yourself!”

Parting her brown legs, soiled and spotted with sores, the girl fell into a semi-coma, surrendered to the labor pains and the pleasure of travail.

When its front claws appeared—small, white, soft and smooth—the cleaning lady and I were startled, immersed in a dense, phantasmagoric trance that was being imprinted on our consciousness by the reggae music wafting in toward us from the health office next door: The squeaking of rats, the roaring of the sea, the cawing of black crows, the gentle rustling of the towering palm tree outside the window, a sudden clap of thunder, vague chatter filtering through the pores in the walls and the spaces between the beds, pieces of heavy white fabric, bloody cotton pads scattered here and there.

We felt cold all of a sudden as we saw its rectangular head emerge into the room, its tiny black whiskers drenched in sticky, translucent, jelly-like mucus.

The cleaning lady said to me later, “I felt things glowing, as if bright little moons had landed on them.”

I said, “When that happened, I was filled with eerie-sounding, weighty talk that I couldn’t understand. It was choking me up.”

With a final contraction, it popped out, nimble and energetic, as though the strains of the reggae music were giving a rhythm to the flow of blood in its newborn arteries.

In my statements to the Department of Criminal Investigations, I told them that the Qur’anic chants, the cooing of the doves, and the hymns of adoration hadn’t been coming from a specific source, and that we couldn’t possibly claim that any of us would be able to put Time’s standstill to music.

At that moment, the palm tree’s ripened fruit fell, a nightingale sang, and a star that had illuminated the world’s Eastern reaches tumbled to Earth. Opening a pair of bright black eyes, it shook the mucous off itself in a series of violent jerks. Then, as others can attest, it barked and leapt through the window onto the sidewalk outside.